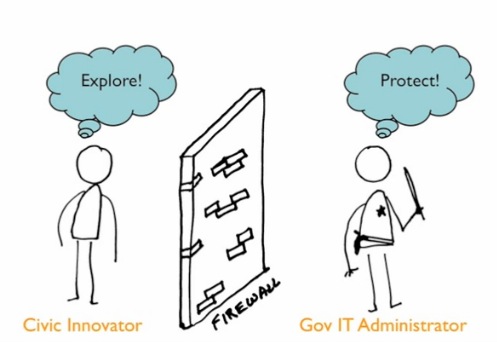 The Knight Foundation continues to fund the latest projects in news and technology, but the format of the Knight News Challenge might be near an end.

In announcing the latest recipients of the Knight News Challenge grants, Knight Foundation CEO Alberto Ibargüen slipped in that the grants “may be finished” and “it may be that, as a device for doing something, it may be that we’ve gone as far as we can take it.”

"While technology has changed nearly every aspect of our lives, it is only beginning to affect the civic sphere." - Michael Maness

In the meantime though, the new round of grantees are specializing in making government more open and effective.

“While technology has changed nearly every aspect of our lives, it is only beginning to affect the civic sphere,” said Michael Maness, Knight Foundation’s vice president for journalism and media innovation and the MIT-Knight Civic Media Conference.

Built primarily by Code for America fellows, Civic Insight‘s team hopes to make it easier to find new information about housing vacancies. Rather than leaving houses on the market, which both lowers the value of housing in the area as well as limits the potential of that community, Civic Insight would collect real-time data on current vacancies by plugging directly into government databases. The pilot program, BlightStatus, was created in 2012 in New Orleans.

“We’ve seen that a lack of reliable data about government processes at play behind the scenes is actually a major blocker to these groups achieving their community development goals,” project lead Alex Pandel said in her Knight grand proposal video.

From the Department of Veterans Affairs to your local zoning board, governmental computer systems are often antiquated and incompatible with other systems, slowing down bureaucracy and civic life. GitMachines’s team, comprised mainly of former government employees and contractors, hopes to fix that by creating regulation-compliant, open-source web tools that are easily accessible by civic developers to create that government IT administrators can easily adopt for their respective agency.

“GitMachine was really born out of our frustration,” project lead Rodney Cobb said in an interview with Idea Lab.

GitMachines from Knight Foundation on Vimeo.

Like most of us, the creators of OpenCounter were probably tired of filling out paperwork in triplicate in order to get anything done at the local government level. That’s why a team of Code for Americas fellows piloted the program in 2012 with the government of Santa Cruz, Calif. to collect data on the latest regulations, paperwork, cost and timeline needed to open up shop, “designed to compress several visits to city hall into a single web session.” With almost half a million dollars from Knight, the OpenCounter team will expand beyond Santa Cruz to several 2013 Code for America cities and build a better content management system and API.

“If we want to make a change in this space, we have to take this step,” project lead Peter Koht said in an interview with Idea Lab.

OpenCounter from Knight Foundation on Vimeo.

Open Government for the Rest of Us

“The problem with open government is it isn’t open, and people don’t trust their government,” project lead Susana Vasquez said in their Knight grant proposal. “We’re about to change all that by pushing government open and having it be led by neighborhood residents and engaged by neighborhood organizations.”

Open Gov for the Rest of Us from Knight Foundation on Vimeo.

Outline got its start creating simulators of the impacts of Obama and Romney’s respective economic plans during the 2012 campaigns. Now, the TechStars project will expand with the help of funding from Knight and data from the IRS, the Census Bureau, etc. With Outline, citizens should be able find out the impact of any given public policy on their home or job.

“It helps break down that information barrier between citizens and policymakers,” CEO Nikita Bier said in proposal video to Knight.

Outline.com from Knight Foundation on Vimeo.

From summaries to audio recordings to key facts, Oyez has served for 20 years as a source for easy “timely, balanced, plain-English” information on U.S. Supreme Court cases on desktop and mobile apps. Now, Professor Jerry Goldman of the ITT Chicago-Kent College of Law hopes to expand his database to state supreme and federal appellate courts, powerful yet arguably ignored decision-making bodies. Goldman hopes to target a total of six courts in California, Texas, Illinois, New York and Florida, which together house one third of the American population.

“We aim to give the public a front-row seat and help to explain what it is the public and the press will be watching or listening to,” Goldman said in an interview with Idea Lab.

Plan in a Box

Plan in a Box promises to “take the hassle out of keeping citizens fully informed.” It’s an open-source online platform used to put all collaboration material (documents, videos, schedules, maps, etc.) in one open forum to make it easy for the public to know the progress on the latest governmental initiative. It’ll also help notify citizens when they can get involved with any given project. When decisions affect everyone, OpenPlans thinks everyone should have a say.

Plan In A Box from Knight Foundation on Vimeo.

For all the technology and social media that enables communication and collaboration, government often does not boast the same team spirit. Procure.io, soon to be rebranded as ScreenDoor, will work to standardize the contracting process, creating a library of calls work governments can pull from as well as simplifying the application process. Procure.io would prevent slowing down collaboration with extra forms and miscommunication.

“It helps governments engage their local communities in terms of the business opportunities they have — and it helps them put their contracting opportunities out and receive bids from local businesses — and then try to basically find the best value for their dollar,” project lead Adam Becker said in an interview with Idea Lab.

Procure.io from Knight Foundation on Vimeo.

Editor’s Note: MediaShift and Idea Lab received a Knight News Challenge grant in 2007 that was renewed for three years in 2010. MediaShift just received funding from the Knight Prototype Fund for CollabMatch.

Zach C. Cohen is an editorial intern for PBS MediaShift. He is also the editor-in-chief of The Eagle, American University‘s student newspaper, and a reporter for Latin Pulse, a weekly radio program on Latin American foreign affairs based at AU’s School of Communication. Get regular updates from @Zachary_Cohen on Twitter or on his blog.