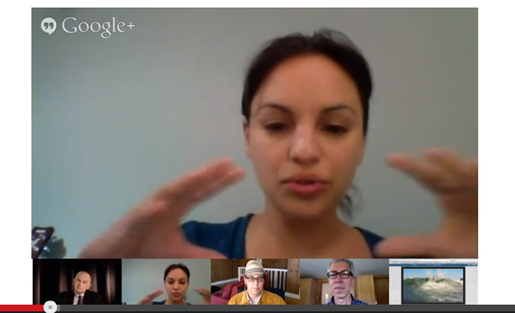 Do you love photo and video sharing? Then this episode is for you. First, Facebook announced that popular photo sharing and filtering service Instagram will add video to compete with the popularity of Vine, owned by Twitter. Meanwhile, a photographer has sued BuzzFeed for just that kind of sharing, claiming $3.6 million in damages for using his photo of a soccer player — and enabling sharing on other sites. We’ll talk to copyright lawyer Richard Stim of Nolo on the validity of the case and the role of copyright in digital journalism. Then, we’ll talk to Northwestern University in Qatar’s Dean Everette Dennis about his new study on media use in the Middle East, and the growing use of mobile phones for news there. MediaShift’s Mark Glaser hosts, along with Mónica Guzmán from the Seattle Times and GeekWire.

You can watch the podcast here:

Richard Stim is a Bay Area attorney who specializes in copyright, patents, and trademark issues. He is an editor at Nolo, author of several legal and business books, and answers questions on intellectual property topics at his Dear Rich blog.

Everette E. Dennis is dean and CEO of Northwestern University in Qatar. Dennis has extensive international experience with media in Eastern Europe, Latin America and East Asia. He is a member of the Council on Foreign Relations and has served as a trustee of the International Institute of Communications. Prior to his appointment at Northwestern, he led the Center for Communications and was an endowed professor at Fordham Graduate School of Business in New York City; was founding director of the Media Studies Center at Columbia University; founding president of the American Academy in Berlin and dean of the School of Journalism at the University of Oregon. He has held professorships at four U.S. universities and is the author some 45 books on media industries, media law, freedom of expression, journalistic practice and related topics.  He was a senior vice president of the Gannett and Freedom Forum foundations. He has served on the board of the International Center for Journalists, as national president of the Association for Education in Journalism and Mass Communication and is currently chair of the Fred Rogers Center for Children’s Media.

Facebook announced June 20 that Instagram users will be able to record and share 15-second videos. Instagram is a popular photo-sharing mobile app and social networking site that boasts 130 million users and 16 billion photos. Reports circulated in May that Facebook was testing something similar to Twitter’s Vine, Viddy, Cinemagram and SocialCam. Usage of Vine has been growing since it debuted in January while use of Instagram has stagnated. But while people were quick to compare Instagram video to Vine, actor and filmmaker Adam Goldberg told CNET that they are very different tools.

How does this move fit into the ongoing battle between Facebook and Twitter for users? Will Instagram and its users benefit from video’s complement to photography, or will it distract from the app’s original purpose?

Idaho photographer Kai Eiselein has sued BuzzFeed for $3.6 million for using his photo and helping to spread it to dozens of other sites. BuzzFeed licenses some photos from Getty or Reuters, but oftentimes uses fair use principles (transforming the original intent of the work, not lessening the original value of the work, etc.) to justify the sharing of photos from Flickr and other photo sharing sites. This is not the first time BuzzFeed has encountered such a suit. BuzzFeed settled a copyright infringement case in October over photos of Katy Perry and Kathy Griffin.

How can sites like BuzzFeed, which thrive and depend on sharing photos, GIFs and videos,  balance their business model with the value of the content they’re sharing? What would a ruling for Eiselein mean for the future of a share-friendly Internet?

A new study from Northwestern University in Qatar shows a vibrant use of mobile devices and a growing trust in the news media in the Middle East. Drawing from respondents in Lebanon, Tunisia, Egypt, Saudi Arabia, Bahrain, Qatar, Jordan and United Arab Emirates, researchers found the Internet is quickly catching up as the medium of choice. TV remains the most popular source for news in the Arab world, and a “digital divide” leaves lower income individuals without access to the web. Facebook dominates as the social network of choice, beating out Twitter and Google+. The study also reveals contradictory opinions on freedom of speech; respondents called for more regulation of Internet speech and simultaneously acknowledged that people are usually responsible online.

Which photos do you share online?Zach C. Cohen is an editorial and podcasting intern for PBS MediaShift. He is also the editor-in-chief of The Eagle, American University‘s student newspaper, and a reporter for Latin Pulse, a weekly radio program on Latin American foreign affairs based at AU’s School of Communication. Get regular updates from @Zachary_Cohen on Twitter or on his blog.

One response to “Mediatwits #84: Instagram to Launch Video; BuzzFeed Sued for Photo Use; Middle East Mobile Use Booms”