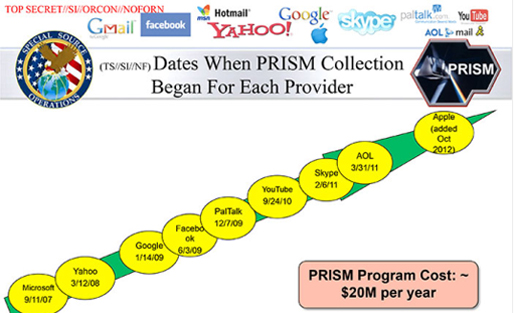 The PRISM slide deck leaked to the Guardian and Washington Post includes this slide showing when each company allowed the NSA and FBI to gain access to its data. It was also ridiculed for poor and backward-looking design.

Government snooping has been a recurring theme on our podcast, and this week the biggest revelation of all came out: The National Security Agency has had unfettered access to servers at Microsoft, Yahoo, Google, Facebook, PalTalk, AOL, Skype, YouTube and Apple (but not Twitter) since 2007, according to an inside government source who was horrified by the collection of private data. The source shared a top secret presentation about the PRISM program with the Washington Post and Guardian. The tech companies so far have denied being involved, but government officials have defended the program as important to track terrorists abroad.

Plus, photojournalists were up in arms when the Chicago Sun-Times fired its entire staff of 28 photojournalists in favor of reporters using iPhones and freelance photographers. We’ll talk to UC Berkeley assistant professor Koci Hernandez, former photographer at the San Jose Mercury News, on the implications of this decision on the Sun-Times and on journalism as a whole. Then, we shift to the future of political reporting. While politicians are avoiding reporters and reaching out directly to constituents, Politico is expanding with new hires and new missions. We’ll bring on former NPR Congressional Correspondent and DecodeDC founder Andrea Seabrook on the role of political journalists in the shifting digital age. MediaShift’s Mark Glaser will host, along with regulars Ana Marie Cox from the Guardian and Monica Guzman of the Seattle Times and Geekwire.

Richard “Koci” Hernandez is a national Emmy award-winning video and multimedia producer who worked as a photographer at the San Jose Mercury News for 15 years. His work for the Mercury News has earned him two Pulitzer Prize nominations and was awarded a national Emmy award for the New Approaches to Documentary category. His work has appeared in the New York Times, Wired Magazine, a National Geographic book on iPhoneography and
international magazines.

Andrea Seabrook is the founder of DecodeDC. In July of 2012, Seabrook left NPR where she was a long-time Congressional Correspondent. Seabrook hosted Weekend All Things Considered, has been a regular guest host of All Things Considered, Weekend Edition, and Talk of the Nation, and has worked with NPR’s Planet Money team. She has a bachelors degree from Earlham College, and worked and studied for several years in Mexico City. Seabrook even had a bit-part in the prime time telenovela, Demasiado Corazon.

The Guardian and The Washington Post report that the National Security Agency gets unfettered access to the servers of Google, Facebook, Apple, Microsoft, AOL, Yahoo, YouTube, Skype and PalTalk. Google, Apple and Facebook have denied having knowledge of the surveillance. The Guardian also reported that the NSA receives millions of phone logs every day from Verizon. The Obama administration and Congressional leaders contend that these actions are necessary. for national security and to prevent terrorist attacks. Obama had announced he intends to scale back the “War on Terror,” begun under President George W. Bush with roving wiretaps, which then-Senator Obama criticized in 2007.

How does, and should, the U.S. balance needs for national security and privacy? Does the potential chilling effect on free speech outweigh a desire to intercept attacks on American soil? What responsibilities do these Internet companies have to their customers have to protect their data? And should we be lauding Twitter, which isn’t on the list?

The Chicago Sun-Times has fired its entire staff of 28 photographers. In their stead, the Sun-Times plans to train its reporters to use iPhones or hire freelance photographers when necessary with a new focus on video. The decision represents the basic realities of the media revolution: breaking news doesn’t wait for photo staff to show up, and that same staff may be a “luxury.” After all, Yahoo CEO Marissa Meyer points out that everybody is a photographer. Chicago Tribune photojournalist Alex Garcia condemned the decision as “idiotic,” “union-busting” and motivated by shrewd business calculations. Relying on freelancers poses logistical concerns, and Garcia worries that text reporters often don’t think with the right “hemisphere of the brain” to be photographers. The photographers staged a protest at the Sun-Times yesterday and the Guild complained the firings were illegal.

Was this a good move for the Sun-Times? Will other news outlets follow?

When Rep. Michele Bachmann, R-Minn. decided not to seek another term in Congress, there was no press conference. There was a YouTube video. Bachmann, Barack Obama, Hillary Clinton, Anthony Weiner and many more politicians are bypassing the press and reaching out, unfettered, to constituents to avoid filters and “gotcha questions.” Politicians often use YouTube, Twitter and Facebook, and the White House uses Pete Souza’s photos to tell Obama’s story the way he wants it told. Op-ed columnist Frank Bruni contends that the maneuver undermines journalists and prevents them from policing government.

How does this impact voters’ impressions of politics and journalism? Can political journalists find a new way to cover politics in this new reality?

With special guest Andrea Seabrook of DecodeDC, a long-time NPR Congressional correspondent who was honored by the White House as a Crowdfunding “Champion of Change”

4. Politico on the rise

The news outlet for political junkies and diehards Politico has hired Foreign Policy Editor-in-Chief Susan Glasser to focus on long-form storytelling and compiling opinions from thought leaders. Editors call it “the largest expansion of our company in three years,” complete with a new “special glossy edition” of the print Politico magazine that will house profiles, investigations and analysis. Politico is also hiring a dozen reporters at a time when most news outlets are cutting staff. Glasser is known for transforming Foreign Policy, in her words, “into the leading digital-era destination for international affairs.”

What do you think about Politico’s bold moves and investment? Will it pay off in the long run? Why should it mimic legacy political magazines if they are struggling?

Don’t forget to vote in our weekly MediaShift poll, this time about government snooping: