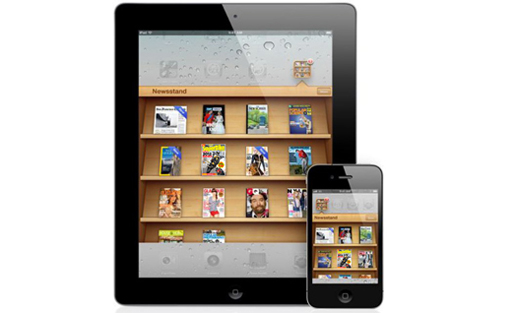 Big device makers will come up with even more tools that allow people to access content in more appealing ways.

Not long ago, I heard Hearst Corp. Magazine Chief Executive David Carey relay a remarkable development: Since the debut of the iPad Mini, paid electronic subscriptions for Hearst magazines had skyrocketed. When he said this in February, at the Dive Into Media conference, the iPad Mini wasn’t even three months old. Though the Mini is now outselling the original iPad, the 7-inch version still makes up a small percentage of the total number of tablets out there. And yet, it’s driving an outsized percentage of Hearst’s paid subscriptions. Digital subscriptions had been just shy of 800,000 at the end of 2012, but by February they were at 900,000. Last month, with the help of the Mini, they surged past 1 million, helping Carey achieve what had been an elusive goal.

"The publishing business, the news business and the content business in general all have a device problem -- a big one. They are overly dependent on devices for delivery of content. And they have no control over that side of the equation."

Why was the Mini such a digital subscription juggernaut? It’s a women’s product, “something you can put in your purse,” Carey said. That makes it the ideal device for connecting with Hearst titles such as Cosmopolitan, Good Housekeeping and Marie Claire.

This was great news, I thought. A simple design change, shrinking the 10-inch screen, had unlocked a large and growing source of digital revenue. Maybe all the publishing business really needed was the right device to reconnect the reader with the content in the right way. Of course, that’s wishful thinking.

In fact, the publishing business, the news business and the content business in general all have a device problem — a big one. They are overly dependent on devices for delivery of content. And they have no control over that side of the equation.

Recently, we’ve seen the upside. The iPad, in particular, created an entirely new business model for publishing. It allowed for deeper engagement and easier access to long-form content. Newspapers and other publishers finally found in the tablet the opportunity to introduce the paid-for app.

While it has been energizing to see the new revenue opportunities emerge from these devices, it’s sobering to look at the costs they’ve saddled publishers with. Each new device brings with it an obligation to tailor content for it.

“While we love the different screen sizes for consumers, as publishers, there is enormous complexity in terms of adapting our product,” Carey said.

And the really scary part is how quickly these devices emerge. The original iPad is not yet 4 years old. The iPad Mini has barely crossed the six-month mark. How long will the life cycle of the tablet turn out to be? And what comes next? Google Glass is about to have its broad rollout. Samsung is doubling down on product innovation. It’s a safe assumption that big device makers will come up with even more tools that improve the consumer experience and allow people to access content in more appealing ways.

Will publishers have to retool their product for each new device? Retooling isn’t just about changing technology. It’s also about changing how content is produced. Each new device brings with it new affordances. Content needs to be tweaked, re-engineered, or, in the case of the iPad, completely reconceived in order to optimize the experience.

That’s an expensive proposition. News Corp.’s The Daily was an ill-fated attempt to design a newspaper product specifically for the iPad. Apple engineers worked with News Corp. executives to ensure that the initial product took full advantage of what the iPad had to offer — bold photo displays, embedded video, etc. The project closed in less than two years, after having burned through a good chunk of its initial $30 million investment.

Chris Wilkes, vice president for audience development and digital editions at Hearst, warns that publishers can easily spend too heavily just trying to keep up. “If you’re not careful, that alone can sink you,” he said in an interview. But he also believes that a lot of that money could be spent more wisely if device makers and publishers could agree on some common approaches. “We spend a lot of time trying to get everyone rowing in the right direction in terms of open standards,” he said.

Hearst worked to ensure that a single digital edition of a magazine could appear on different devices with various aspect ratios.

Nikesh Arora, Google’s chief business officer, also speaking at the Dive Into Media conference, said he believes we’re heading toward a situation where the device you use will mean less and less. “In the past many years, you’ve had specific experiences around specific screens,” he said. In the future, he thinks we will be more likely to have a uniform user experience, no matter the device.

But history suggests the opposite is more likely. New formats drive new business models. The modern-day paperback, created by Penguin founder Allen Lane in 1935, revolutionized book publishing by making serious literature accessible to a wider audience. The lower price point was key (the first volumes cost as much as 10 cigarettes) because it allowed the books to be sold in Woolworth’s and in train station kiosks. But, like the iPad Mini, the size made the difference. Paperbacks were designed to fit in the jacket pockets of soldiers in World War II. Penguin also created a children’s line, Puffin Picture Books, with volumes small enough that kids who were being evacuated could bring them along to temporary shelters.

In fact, for journalism, the technological platform has usually led and the profession has followed. Radio required pioneers like Norman Corwin and Edward R. Murrow to invent the genre of radio news storytelling.  A similar evolution took place with television news. With TV and radio, however, the technological platform was protected by a tight regulatory framework (government-issued broadcast licenses) that limited competition and slowed innovation. That might have been bad for the consumer, but it was great for the news business.

The big differences today are the speed of change and the investment required on the news side to keep up. Anyone who has labored at a newspaper over the past decade knows that most newsrooms are still struggling to balance the 24-hour nature of the web with the process-heavy workflow of producing a daily print product. Reporters spend most of their time trying to meet a 4 p.m. print copy deadline, instead of producing fluid stories for web readers.

Only a handful of news organizations try to produce news that fits well into the 4-inch screen of a mobile phone, even though most data indicates that’s where the majority of news consumption will take place.

As the speed with which new devices enter the market increases, the big risk is that many publishers could slip further behind.