Finally: A Guide for Journalists to Navigate Fair Use of Copyrighted Material 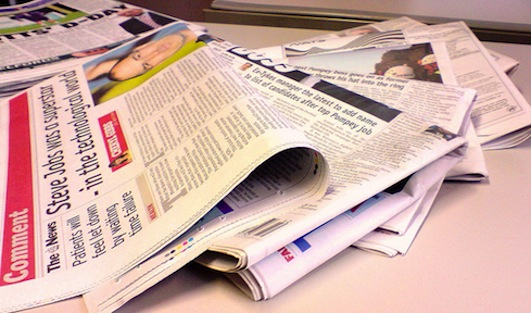 Last year, a former student contacted me to ask if her news outlet, a network affiliate, could use a video clip from a Comedy Central show to introduce a segment about election-year campaign spending.  The purpose of the segment was to comment on the show’s many attempts to raise awareness of the rules that govern such spending.

And, last month, a former student contacted me to ask if his news outlet, an online startup with a hyperlocal focus, could embed a federal government report on the outlet’s website. The purpose of the embedding was to enable readers to review for themselves the evidence for a claim and then draw their own conclusions.

"The report identifies seven principles that represent the shared opinion of journalists in evaluating what is 'fair' in their field, and each principle correlates with a situation commonly encountered by journalists."

The journalists were worried about copyright infringements, and they wondered if the “fair use” doctrine would protect them. (It allows people in limited circumstances to use copyrighted works without permission or payment.) In the first case, I told the journalist that she would be protected because of how and why she used the work, and in the second case, I told the journalist that the fair use doctrine was irrelevant because works prepared by the federal government generally are not copyrightable.

I have these talks pretty often with clients and former students (note to self: do a better job of teaching copyright law), and the reason is straightforward: Many public communicators, including journalists, struggle to apply the fair use doctrine in their daily work. They seek legal counsel, and sometimes they ask what other journalists would do in the same or similar circumstances.

Enter: the “Set of Principles in Fair Use for Journalism,” released Friday at a TEDx event at the Poynter Institute. It was prepared by the Center for Social Media and the Program on Information Justice and Intellectual Property at American University, with support from the Robert R. McCormick Foundation.

The report is a statement of principles to help journalists, defined broadly to include a wide range of public communicators, interpret the fair use doctrine. It adopts a broad definition of “journalist,” it says, because of the “changing nature of the technologies that support and enable journalistic practice.”

The report identifies seven principles that represent the shared opinion of journalists in evaluating what is “fair” in their field, and each principle correlates with a situation commonly encountered by journalists. That approach gives the report an accessibility and practicality that should help journalists, like my clients and former students, make fair use decisions in their daily work.

The principles and situations emerged from a series of deliberative meetings, in 10 cities across the country, led by American University researchers Patricia Aufderheide and Peter Jaszi. In each meeting, a small group of journalists discussed in depth the common and recurring fair use problems they had experienced or observed. Then, with the guidance of an advisory group of copyright lawyers, Aufderheide and Jaszi distilled those experiences and observations into the principles and situations that anchor the report.

SITUATION: When copyrighted material is used as historical reference in news reporting or analysis.

DESCRIPTION: Journalists often make reference to previous events, to people in earlier situations, to previously existing structures, and to other historical items in the process of reporting or commenting on the news …

PRINCIPLE: Fair use applies to journalistic incorporation of historical material.

WHAT’S FAIR IN THE FIELD?

The basic function of the fair use doctrine, according to the case Triangle Publications v. Knight-Ridder, is to “balance the author’s right to compensation for his work, on the one hand, against the public’s interest in the widest possible dissemination of ideas and information on the other.” Thus, the doctrine emerged in response to concerns that (1) copyright law is designed to encourage the creation of works that advance knowledge and the arts, and (2) an absolute ban on using those works derivatively would frustrate that design.

The courts developed the fair use doctrine in the 19th and 20th centuries, and Congress codified it in Section 107 of the Copyright Act of 1976. It reads, “The fair use of a copyrighted work … for purposes such as criticism, comment, news reporting, teaching (including multiple copies for classroom use), scholarship, or research, is not an infringement of copyright.”

The real challenge is to determine in individual cases whether the use of a particular work is fair, a determination that requires the consideration of four factors listed in Section 107:

(1) the purpose and character of the use, including whether such use is of a commercial nature or is for non-profit educational purposes;

(2) the nature of the copyrighted work;

(3) the amount and substantiality of the portion used in relation to the copyrighted work as a whole; and

(4) the effect of the use upon the potential market for, or value of, the copyrighted work.

The statute does not articulate how exactly to consider those factors, and courts have held that those are not the only permissible factors. Another is the shared opinion of practitioners in evaluating what is “fair” in their field. In other words, the issue is whether a person claiming fair use has acted reasonably and in good faith, in light of the generally accepted practices in his or her field. It’s important, then, for critical and creative fields to articulate their understandings of fair use.

Notably, the situations and principles outlined in the report apply to all forms of media, from print to podcasts and beyond. They stand to help a New York Times journalist as much as a Spot.Us freelancer or independent blogger. And generally they stand to improve efficiency and effectiveness in news production by lowering risk (i.e., the risk of violating copyright law) and enhancing confidence (i.e., the confidence of journalists to make fair use decisions).

They also stand to stem the self-censorship caused by confusion among journalists about the contours of copyright law. In that regard, Aufderheide and Jaszi predict the biggest gains will be made among entrepreneurs and innovators who are developing outlets for web-native news and analysis. The reason is those groups have experienced the greatest confusion about the fair use doctrine.

Perhaps best of all, in ordinary situations, the report stands to empower journalists to make decisions without consulting someone like me, a media lawyer. We aren’t always available at the moment you need us, and we can be costly. Those two qualities have a disparate impact on spot news reporters, who need to act quickly, and on entrepreneurs and innovators, who don’t always have ample resources.

My main complaint about the report is that it lacks references to case law and scholarship. They would have added more texture and richness to the analysis, and they would have foreclosed any criticism that the principles are unsupported by law. Indeed, it’s possible that some would argue that the principles are more doctrinally normative than positive. But in general they comport with my understanding of fair use, and the report is a worthy contribution to the discussion of how journalists navigate copyright law.

Jonathan Peters is a media lawyer and the Frank Martin Fellow at the Missouri School of Journalism.  He blogs about free speech for the Harvard Law & Policy Review, and he has written on legal issues for The Atlantic, Slate, The Nation, Wired, PBS, and the Columbia Journalism Review.  Peters practices law in his time off campus, and he is the First Amendment Chair of the Civil Rights Litigation Committee of the American Bar Association.  Follow him @jonathanwpeters on Twitter.

One response to “Finally: A Guide for Journalists to Navigate Fair Use of Copyrighted Material”