How Do We Make Freelance Journalism Sustainable? 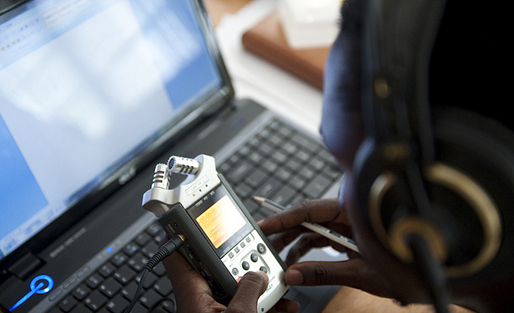 With the recent cases of hacking of news organizations' networks and reporters being snooped on by the DOJ, journalists should be more concerned than ever about their security. Image courtesy of Internews Network on Flickr and used here with the Creative Commons license.

Last month the Chicago Sun Times fired its entire staff of photographers -– 28 full-time journalists — and plans to rely primarily on freelancers. This news is just the most recent in a growing trend across the news industry, which is relying more than ever before on independent journalists and freelancers. However, despite all the debate about the future of journalism, not enough has been said about how we can better support freelance journalists and how best to adapt to a media landscape in which so many people are operating without the resources and backing of newsrooms.

On Twitter, I asked freelancers to tell me what the future of journalism looks like to them. This is the first post in a series where I’ll look at some of their responses. While people come to freelancing for a range of reasons, some by choice, some not, I found a few key themes in the responses I got.

"If we believe that good journalism takes risks, we need to be prepared to find ways to support the risk takers."

But before I get to those responses, some background on the major research done recently, and the conspicuous absence of freelancers.

According to the most recent statistics from the Pew State of the News Media 2013, the U.S. has lost roughly 30% of its journalism workforce since 2000. While I wasn’t able to find concrete data on the rise of freelancers, anecdotal evidence suggests a major shift in the industry. The Committee to Protect Journalists has reported that they are increasingly handling cases for independent and freelance journalists; the Society for Environmental Journalists recently told the Federal Communications Commission that it has seen a spike in membership from people identifying as freelancers; and both Newsweek* and Columbia Journalism Review have reported on the increase of freelancers reporting from conflict zones abroad in the last year.

Indeed, it is in these conflict areas where the issues and challenges facing freelance journalists are most pronounced. At Newsweek*, Sarah Topol writes about the risks of independent journalists who “are often venturing into danger without the training and equipment afforded full-time staffers, such as helmets, flak jackets, satellite phones, first-aid kits, or even health insurance.” Freelancers who talked with the Columbia Journalism Review’s Alysia Santo acknowledged that news organization may lend a hand in extreme cases, however, most won’t even discuss insurance with their freelancers. “This arrangement,” reports Santo, “leaves freelancers — who are taking personal risks on behalf of news organizations — liable for their own expenses if they’re injured or killed in the line of duty.”

However, these issues are not by any means limited to the international context. Of the nearly 100 journalists arrested while covering protests here in the U.S. in 2011 and 2012, many were freelancing for major news outlets including the New York Times and NPR. Many others were independent journalists hoping to sell their stories and photos to local papers and national news sites. When the handcuffs went on, there was often no editor to call, no in-house counsel to come to their defense.

Few of the major “future of journalism” reports released in the last five years mention freelancers beyond a passing reference. I looked back at the Knight Commission report, the Downie/Schudson report, the FCC’s Information Needs of Communities report, the Columbia Post-Industrial Journalism report, and recent Pew State of the News Media reports. While freelancers are mentioned in passing, none of these reports deeply explore the roles and needs of freelance journalists in their discussions of the changing landscape of journalism.

Imagine if we spent half as much time talking about the needs and challenges of freelance journalists as we do talking about “becoming your own brand.” Or imagine if we acknowledged in all the debates about new business models, how many of those models depend on stringers and freelancers. Anyone concerned about creating a robust future for journalism needs to be concerned with the question of how we build stronger networks of support for individual journalists working on their own projects, or as freelancers.

So now on to the responses I received when asking about how freelancers see their future in journalism.

Jay Rosen said in response to my tweet, “It’s increasingly impossible to make a living [as a freelancer] as the price of ‘content’ drops.” The question of how freelancers are paid, if they are paid at all, was highlighted this spring when Nate Thayer published his correspondence with an Atlantic editor who had asked him to write for free (read Felix Salmon, Paul Carr, Mark Armstrong and Alexis Madrigal for more on that debate). Indeed, for many of the freelancers who weighed in on Twitter, the future of journalism looked financially bleak as the price per story has dropped dramatically. Jenn Pozner called the future of freelance journalism “economically dismal,” and Sarah Jaffe summed it up in one word: “broke.”

However, for many, money was just one piece of sustainability. It is time for a broader discussion about how independent journalists sustain themselves over the long haul. I know journalists grappling with PTSD after reporting in conflict areas, struggling with access to credentials or resources for research like academic libraries and databases, and more. There are a hundred little ways that newsrooms support each other, but most fundamentally, they are a built in community that independent journalists don’t have. We are beginning to see new networks emerge — some formal, some ad-hoc — to support freelancers and independent journalists and begin to take on roles institutions have traditionally played with their staff. But much more is needed. Figuring out how to build more connective tissue and deep community among freelancers and across the boundaries of independents and newsrooms would go a long way.

The Daily Beast and CJR pieces mentioned above focus primarily on issues of safety, both the concrete equipment and training needs of freelancers, but also other issues like insurance and legal assistance. For the most part, newsrooms have not stepped up to support their freelancers in this way. This is a huge area of need, and while some great groups are working on these issues (for example, Reporters Instructed in Saving Colleagues and the Digital Media Law Project) they are mostly small organizations with limited budgets and staff. If we believe that good journalism takes risks, we need to be prepared to find ways to support the risk takers.

I separate security and safety here to focus specific attention on the increasing threats journalists face around digital security. With the recent high-profile cases of hacking of news organizations’ networks and Twitter accounts, as well as the subpoenas of journalists’ phone records by the Justice Department, journalists should be more concerned than ever about their security. As with safety issues, journalists working in newsrooms have a different level of infrastructure and investment regarding digital security than solo reporters have.

In terms of both safety and security, the freelancers I talked to felt like access to training was a key concern. Many trainings were out of reach financially, and many journalism schools still are not offering enough in the way of safety and security training. Nathaniel Miller argued that “universities would be wise to develop interdisciplinary courses on entrepreneurialism/freelancing. Great for biz and arts too.” The Digital Security Guide from the Committee to Protect Journalists is a vital resource, but more accessible tech tools, trainings, and resources to help independent journalists manage their own security are still needed. I’ll tackle this and the role of journalism education in preparing people for working on their own further in a follow-up post.

In their recent report on “post-industrial journalism” C.W. Anderson, Emily Bell and Clay Shirky argue that “the process of journalism is being so radically remade by the forces of technology and economics that there is no longer anything that might be described as ‘an industry’ for the individual journalist to enter.” The atomization of news doesn’t just apply to content, but is a lived condition for huge numbers of individual journalists who have had to rethink what it means to work in the news.

That isn’t necessarily a bad thing. But, we need to do more to account for these changes in our debates and discussions about the future of news. We should ensure we have more freelancers at the table and invest as much in reports and technical assistance for individuals as we have for startups and business models.

I’ll write more about these and other issues facing freelancers soon. Drop me a line if you want to chat, or have other ideas for key questions we should raise.

CORRECTION (6/19/13): The story initially cited a story in the Daily Beast by Sarah Topol. That story actually ran in Newsweek, but also ran on the website of the Daily Beast. We regret the error.

Josh Stearns is a journalist, organizer and community strategist. He is Journalism and Public Media Campaign Director for Free Press, a national, non-partisan, non-profit organization working to reform the media through education, organizing and advocacy. He was a co-author of “Saving the News: Toward a national journalism strategy,” “Outsourcing the News: How covert consolidation is destroying newsrooms and circumventing media ownership rules,” and “On the Chopping Block: State budget battles and the future of public media.” Find him on Twitter at “@jcstearns”:http://twitter.com/jcstearns.

17 responses to “How Do We Make Freelance Journalism Sustainable?”