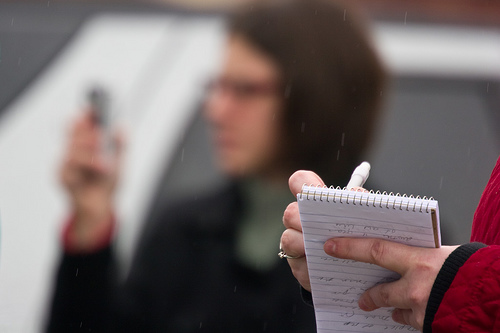 Editor’s Note: This blog post is the third installment in a 3-part series intended to look at engaging citizen reporters beyond crisis events. Part 1 can be found here, and Part 2 here.

I’ve previously written that traditional newsrooms could better foster participation from citizens outside of widespread crisis events. In my first post, I explained why I thought it was common for both newsrooms and citizens to change their behavior during a large scale emergency. In my second post, I listed factors newsrooms might consider if they wish to create a more participatory culture.

"Fragmentation -- and dare I say in some cases desperation -- will drive a variety of mechanisms aimed at increasing audience participation, shaping public discourse as people feel more engaged with their news outlets."

In this post, I note external forces that might encourage or even force a more participatory model for newsgathering and distribution. The combination of three factors, outlined below, point to the scales tipping towards increased citizen engagement in creating and sharing news.

All over the world, newsrooms are launching, shifting their approach to content,  or professionalizing. Many of these newsrooms are located in countries emerging from oppressive regimes. In an excellent report from the Committee to Protect Journalists, “From Arab Uprisings, Five Trends to Watch,” the author notes:

“In a few short months, eight new television stations have emerged in Egypt along with a handful of fresh newspapers, including weeklies that have converted to a daily format. Libya, a country that was virtually devoid of independent media, has seen a burst of new entities, with more than 100 publications, 30 radio stations, seven television broadcasters, and several news websites, blogs, and active citizen-reporters. In Tunisia, dozens of newspaper licenses have been granted, according to the German-funded Tunisia Votes.”

Other new properties are experiments that reflect a more fragmented global news market. Some have a community-focused flavor (LocalWiki), while others track a specific “obsessions” (Quartz). This is a dramatically different approach from a traditional newspaper or television news program, which cover news topics with a more general interest lens. And while this risks creating an infinite vortex of filter bubbles among consumers, they should also attract a more invested audience.

In any case, these emerging news outlets don’t have to adapt their long-standing models to incorporate citizen engagement. They don’t have to create a separate partition, curtaining off unprofessional citizen reporting as though it serves as a sideshow to the main event. They don’t have to revise their business models to incorporate the inevitable aggregation and sharing of viral articles. Instead, they can adopt these concepts from the start, fresh and clear-eyed in what has been a difficult transition for other, older outlets. Some, like the Reddit community, have seen and taken advantage of the power of citizen journalism from the start, and show far greater willingness to report on-the-ground issues with quotes, eyewitness accounts, photographs and video. And for better or worse, they’re likely less afraid of unpolished, uncontextualized, and potentially activist-driven citizen reports.

I won’t belabor the benefits of social media for news gathering and dissemination; I assume we’re all aware and if not, here’s a primer. Most journalists tell me it makes more work for them, but there are compensations – social media can be lively and engaging, and tracking retweets and links provides another way to judge readership and get feedback directly from readers.

Many of the news outlets I mentioned are already engaging with audiences via social media, and via mobile phones. With more than 3.2 billion active users worldwide, mobile is rapidly becoming the universal option for engaging with a news audience. Mobile expands beyond standard social media (Facebook, Twitter, Instagram, etc.) to include mobile websites, feature phone apps, and SMS. I’ve summarized a few news-specific SMS projects with my organization, FrontlineSMS, here.

All of these new tools are creating multiple channels for news audiences to provide news tips, raise issues that are affecting their community, and share articles with others. Newsrooms embracing this from the onset have a tremendous number of options for getting a broad, active audience.

Finally, there has been an incredible commitment from high-profile funding leaders to support innovative news projects. Foundations, governments, and even venture capital firms are offering numerous grants, prizes, investment opportunities and other financial incentives for fresh approaches to news gathering, sharing and distribution (disclaimer: my position at FrontlineSMS is funded by a Knight News Challenge award). Many have a specific eye toward sustainability and the business side of news. As those projects grow, the hope is that new revenue models will emerge.

Others focus on the concept of audience participation in news, both via citizen reporting and distribution of completed news reports. A few examples include the recent Africa News Innovation Challenge (ANIC), a $1 million purse recently distributed to 20 winners creating exciting, innovative news initiatives across Africa. Matter Ventures, a recently-announced accelerator, will fund businesses that may help expand public interest and access to media. The project is jointly funded by KQED, the John S. and James L. Knight Foundation, and the Public Radio Exchange.

In aggregate, I think these factors will lead to some interesting models that include more citizen journalism alongside professional content, the sort of hybrid model described in this dated-but-still-relevant Poynter article. Fragmentation — and dare I say in some cases desperation — will drive a variety of mechanisms aimed at increasing audience participation, shaping public discourse as people feel more engaged with their news outlets.