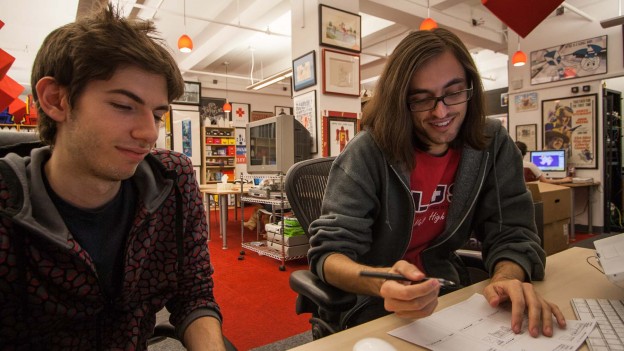 Yahoo on Monday announced it had acquired Tumblr for $1.1 billion. A mentor to Tumblr creator and founder David Karp reveals new details about the formation of the platform and the genesis of the visionary entrepreneur.

“(David Karp) can really put himself in the minds of a person in the modern world, rather than just an engineer. He is a guy who understands the public." -Fred Seibert

Karp’s mom, a friend of Seibert’s wife and a teacher at the Manhattan private school where his children went, told Seibert that her son was getting distracted at school but really liked computers and had a lot of great ideas.

Seibert’s company, Frederator, was working with media conglomerate Primedia on how to handle properties geared to teenagers, said Seibert, the founding creative director of MTV and founder of Next New Networks, later sold to YouTube.

He liked Karp. “I said, ‘David, if you want to become an intern, after school you can come by,'” Seibert told me Tuesday by telephone. “He would come by and hang out…and just soak up and learn.”

He spent time with Jon Jackson, Frederator’s CTO, as well as Seibert’s partner, Emil Rensing, who was a former AOL engineer who had written the code “for core products like AOL messenger,” Seibert said. Seibert, 61, had also been president of the Hanna-Barbera cartoon company and was instrumental in creating popular Nickelodeon shows such as “The Fairly OddParents.”

“In about a year David announced, ‘Now I can come by every day,'” Seibert told me. “I’ve dropped out of school [at the Bronx High School of Science], and am homeschooling.”

“Even though Barbara was a teacher, homeschooling made sense. David was bored in school, and his mother noticed that other than the school day, he was spending all his time on the computer,” Seibert said.

“With homeschooling, in one-and-a-half hours a day, David could get all you get from school,” then spend more time working on his passion.

Karp told Seibert that he really wanted to go to MIT, that “33% of non-religious homeschool applicants get into MIT,” Seibert recalls. “This is a kid you want to have around; anybody at 15 that motivated to find that kind of information and act on it. He was an interesting person.”

“One day,” Seibert continues, “David announced that he had started a [Web] development company in his bedroom.”

Seibert, through an employee named Parker Reilly, connected Karp to Susan and John Maloney, who were launching parenting site UrbanBaby.com in their living room in the DUMBO neighborhood of Brooklyn. At age 15, Karp became their CTO, from his bedroom.

Karp’s clients also included Frederator. “He built our first multi-user blogging platform,” and in 2005 told Seibert an idea Seibert had for a video platform “was very 2000.”

“We started arguing about what he versus I wanted to do. I finally said, ‘You’re more into this than I am. If it won’t cost me more than $5,000, build what you want.’

“He built the first Channel Frederator [a cartoon video podcast], and we started Next New Networks based on his imagination,” Seibert said. “He did all the development work for the next few years.”

Next New Networks, a producer of multiple original Web video channels, was acquired by YouTube in 2011 for an undisclosed sum after having raised a reported $26 million from high-profile investment firms including Spark Capital and Goldman Sachs.

When UrbanBaby was acquired by CNET in 2006, Karp received “several hundred thousand dollars,” Seibert said. “Instead of going crazy — he bought a car, his only extravagance. He said, ‘I’m sick of working out of my bedroom. Can I rent a desk from you?’

“He started working as an independent developer at a desk in my loft,” said Seibert. When I visited Seibert in 2007, he pointed out David and two others sitting at a corner table in his loft-style office on Park Avenue South. Seibert and I are professional friends but have never done business together.

‘This Blogging Thing is Too Hard’

One day, Seibert said, Karp announced that “‘this blogging thing is too hard’ and asked if I’d ever heard of tumblogging. He described a platform he’d started, to share with friends…then started building a product and had acquired the URL Tumblr.com.”

“I said, ‘Honestly I have no idea what you’re talking about, but if you’re into it, I’m into it.'”

Seibert, who prides himself on nurturing talent, said he saw a passion, and someone “who could really see the future, not just in terms of technology, but in terms of how people interact in the modern world.”

“He provides tools for those people who want to do the things they want to do,” Seibert said. “He can really put himself in the minds of a person in the modern world, rather than just an engineer. He is a guy who understands the public. He said every product he created is something he wanted himself.”

Karp’s company Davidville was becoming a real business, Seibert said. Karp, along with engineer Marco Arment, while working on Tumblr also developed a file-sharing product called Senduit.* Around that time they “asked for advice on how to raise money,” Seibert said.

“Those guys wanted to do a typical VC deal, and David was a little uncomfortable with that in terms of giving up control of Tumblr,” Seibert recalls. John Borthwick, co-founder of the BetaWorks incubator, helped Karp to take a smaller amount of capital.

Borthwick, Seibert, Union Square Ventures, Vimeo co-founder Jake Lodwick and others put in a few hundred thousand dollars as angel investors, Seibert said. “And David was off to the races.”

Arment, in an email to me, confirmed much of Seibert’s account.

“Fred [Siebert] was the source of every major contract — he referred Serious Eats, Worldwide Fido, and Next New Networks to us. It was one big Fred social network in that office,” Arment wrote.  “David also learned a lot from Fred about business, marketing, PR, and attitude.

“Fred was in Tumblr’s first fundraising round and held a board seat, but he was always very hands-off — he trusted David’s product instincts, and effectively served as a David ally.”

Tumblr as a Business

Yahoo on Monday announced it had acquired Tumblr, for a reported $1.1 billion. Spark and USV, which eventually invested $13 million each, garnered $192 million each in proceeds, Fortune’s Dan Primack reported.

Karp, who retains operational oversight of Tumblr, has not gone to MIT — though he could now probably fund an institute there in his name.

Yahoo CMO Kathy Savitt, at the CM Summit in New York on Wednesday, said Tumblr isn’t a social network, but rather a “socially focused content” company.

She and others at the conference, including Wilson and Luma Partners’ Terence Kawaja, noted that Tumblr gives Yahoo, second only to Google in Web advertising, a way to better place “native” advertisements into the social stream and mobile devices.

Seibert, who is still on Tumblr’s board and retains an investment, said Yahoo “doesn’t have to do anything” to make a business out of Tumblr. “Tumblr is already on the road to making a business…The advertising community is reacting incredibly well to them.”

Tumblr offers sponsors the chance make sure their Tumblr posts are fed to relevant users, a way to sponsor specially curated areas, and to feed paid content into mobile devices.

“I think what Yahoo can do is supercharge their growth,” Seibert said. He declined to say how much of Tumblr he owns.

Seibert, who once told me he’d rebuilt his own fortunes after losing most of his money, marvels at Karp’s acumen.

“He reminds me of Ted Turner, but also Rupert Murdoch,” Seibert said. “He is like all artists — people who don’t just have a vision; they create the future. Whether the artist is Picasso or Mark Zuckerberg, these are the people who can see around the corners while we’re just walking down the street.”

*CORRECTION (May 24, 2013): An earlier version of the story said that Karp and Arment had combined their file-sharing product with Tumblr. Arment has clarified, and Seibert agrees, that Senduit is a separate product and “shared no code or assets ” with Tumblr.