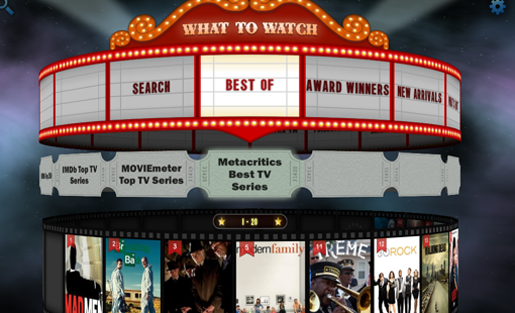 You just finished “Deadwood” or another buzzy, binge-worthy show, after all your friends told you that you had to watch it. That Timothy Olyphant sure is great. What else has he been in? “Justified,” eh? Where can I watch the past seasons? What do my friends think of the show? What about the newest episodes? What else has he been on?

Does that sound familiar? Whether you still have your pay TV subscription or not, similar conversations to this one are happening in many households each evening.

As Netflix and HBO continue on their collision course, the future of networks themselves may be as 'first screen' apps."

Fortunately, there are now many so-called “second screen” apps and websites that help you through the post-Netflix/pre-McCain law TV experience. Below are a few of the free apps you should check out — whether you’re still flipping channels, you’ve moved entirely to streaming services or, like most people, you do a little of both.

My team at Cainkade and I looked at more than a dozen popular apps (click on the infographic at right for the full list) that help enhance the TV experience. The recommended apps below have been tested on the Web and iPad or iPhone to level the playing field, as not all of them are available for other platforms. And I haven’t focused here on subscription services, a la carte or branded viewing experiences from the networks themselves. If you want to watch current episodes of “Dexter,” it’s Showtime Anytime (and you need pay TV credentials); if you want to watch “Nashville,” it’s ABC; “Game of Thrones,” HBO, and so on. As Netflix and HBO continue on their collision course, the future of networks themselves may be as “first screen” apps.

What should we watch? Where can I find it? The top apps and sites in this category use your social media profile and networks, combined with data from your Netflix account, to suggest what you should watch now.

NextGuide
iPad, Web
NextGuide tries to answer the question – what should I watch now?  It combines search, discovery and recommendations with the ability to easily find the show you want on third-party services. I found that it was easy to start using without a lot of configuration. Also unique is the deep integration of linear programming with streaming content. I like the in-app playback. Note how the Stefon clip on Hulu plays in an overlay on top of NextGuide itself, without having to leave the app. Depending on your pay TV provider, you can also use NextGuide to control your DVR.

Fayve
iPad, Web
The movie marquee user interface doesn’t take full advantage of the touchscreen, and I learned first-hand about the limits of a round user interface. But I can see how Fayve would be very easy to use for a less technically minded viewer. It is movie-centric, but comprehensive with its data sources for recommendations, such as Metacritic. Fayve was reportedly commissioned by Microsoft co-founder Paul Allen to help browse his own movie collection. Ironically, for Allen, this could have been a nice Windows 8 app rather than this masterpiece of skeumorphism.

There is a lot of activity in the social TV category. These apps try to reinvent the water cooler effect, usually built on top of social media. Some of the most talked about apps include Zeebox, GetGlue and Miso. Given the “Mad Men” test to see what people were saying about last week’s episode, GetGlue was the most interesting. Zeebox is built to support linear programming — you can talk about programming when it’s on the air. The app was of little use when I wrote this on a Thursday morning, since “Mad Men” was not on at that time. Miso and Viggle are largely “check in” services that allow you to tell your friends on social media that you’ve watched a show and how you rated it.

GetGlue
iPad, iPhone, Web
I’m more of a reader than a writer when it comes to show commentary. “Mad Men” is well-covered on Slate, Vulture and elsewhere. Back in the day, I remember EW had great “Lost” coverage. If you find the right community, comments from fans can be insightful. GetGlue passed the “Mad Men” test with flying colors — fun commentary on episode “The Crash” and bonus points for a GIF of Cosgrove’s epic dance. GetGlue lends itself very well to the casual or heavy user.

Networks such as Showtime (disclosure: my firm Cainkade has worked with Showtime in the past on Showtime Social) and The CW have introduced apps that combine a social experience with TV viewing — two screens, essentially, in one screen.

The CW
Web, Android, iPad, iPhone, Windows 8, XBox 360
I have too many gray hairs to watch The CW (anymore), although I think I’d dig “Arrow.” This app is one of the few that includes an in-line playback experience that allows you to watch and browse at the same time. And the simple Facebook and Twitter social experience is well-done. Social is not as robust as GetGlue or its peers, but it’s useful to have commentary in one place.

IMDB
Web, Android, iPhone, iPad, Blackberry, Windows 8
IMDB has been the second screen “app” of choice since second screen was an 8-lb. Dell Latitude on the couch. IMDB is the best source for details on the cast, crew, locations, music and other details for every TV series and movie ever (not verified) made. The user interface of the iPad app in particular improves upon the website, making it easy to browse through filmographies, related titles or cast with just the swipe of a finger.  The lead in “Cabin in the Woods” was Peter Russo’s girlfriend Christina in “House of Cards.” I knew she looked familiar!

This post is part of our in-depth series, “Best Media Apps.” Go here to see all the stories in the series.