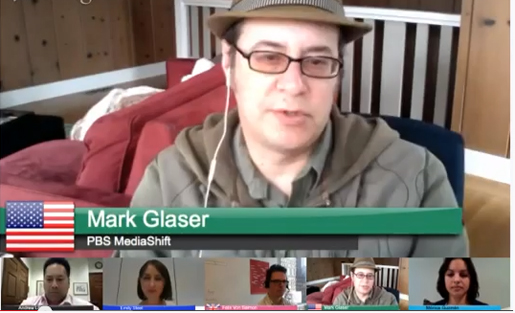 PBS MediaShift's Mark Glaser hosts another episode of the Mediatwits podcast, this time focused on how journalists can use social networks such as LinkedIn to their advantage

News and social media seem like two great tastes that go together. But lately, the two have been at loggerheads. After the @AP Twitter feed was hacked, Wall Street reacted as if the news was real. And during the Boston manhunt, it was hard to tell who was spreading more misinformation, social media or traditional broadcast and print news. On this week’s podcast, we’ll discuss the Twitter hack and what the microblogging service needs to do to stem security breaches. Our special guest Yumi Wilson from LinkedIn will talk about how the professional social network can help journalists beyond finding jobs. Our roundtable will include Mark Glaser moderating, along with Guardian’s Ana Marie Cox, USC’s Andrew Lih and Seattle Times’ Monica Guzman. We’ll also discuss the recent purchase of Instapaper by Betaworks, a startup that has now collected news-flow tools such as bit.ly, Social Flow, Digg and Chartbeat.

NOTE: Mediatwits is recorded each week on Google+ Hangouts. It appears there have been technical issues this week with Google Hangouts, so we don’t have a recording of the podcast this week. We’ve spoken to Google reps and are hoping to find out more. We apologize for this.

UPDATE (5/7/13): After speaking with representatives at Google+, we found out that the technical issues with this podcast were likely related to an upgrade of Google Hangouts on Air at the time of our recording. Here’s more information on that upgrade. Google+ reps apologized for the tech issues and promised to provide better communication so that we don’t lose another podcast recording in the future. Again, we apologize to our audience and our guests for this technical problem, and hope you’ll continue to watch each week.

Ana Marie Cox is a senior political columnist for The Guardian. She is the founding editor of the Wonkette blog and has covered politics and the culture of Washington, DC for outlets including the Washington Post, Playboy, GQ, Mother Jones and Elle. She is the author of the novel Dog Days and lives in St. Paul, Minn. Followe her on Twitter @anamariecox.

Mónica Guzmán is a columnist for the Seattle Times and Northwest tech news site GeekWire and a community strategist for startups and media. She emcees Ignite Seattle, a grab-bag community fueled speaker series. Mónica was a reporter at the Seattle Post-Intelligencer and seattlepi.com, its online-only successor, where she ran the experimental and award-winning Big Blog and drew a community of readers with online conversation and weekly meetups. Follow her on Twitter @moniguzman

Yumi Wilson is the community manager for LinkedIn for journalists. She is part of a team dedicated to training journalists and other folks how to take full advantage of LinkedIn. She is also an associate professor of journalism at San Francisco State University. In a previous life, she was a news reporter for the Associated Press in Los Angeles and the San Francisco Chronicle. Follow her on Twitter @YumiWilson.

The @AP feed was hacked on Twitter, with a note about President Obama being injured by a bomb at the White House. While the @AP sent out notes on other feeds saying the information was false, the stock market gyrated, losing $136 billion in market value in the time after the hack. Twitter needs to provide stronger security measures for news outlets, especially now that the SEC allows companies to post important information on social media. Twitter is also hiring a new “head of news and journalism” to better relations with newsrooms. Was this a failure of Twitter security and how can they improve that? How should newsrooms react to a hack attack that might move markets?

In Wake of AP Hack, Twitter Looks to Get Serious About Journalist Relations (The Verge)

Somebody Is Fixing Twitter’s Misinformation Problem, But It’s Not Twitter (Atlantic)

2. How Should Journalists Use Social Media?

Journalists are all over Facebook and Twitter looking for sources and promoting their work. But what about LinkedIn? The social network for professionals used to be a place to find work or find hires. Now it’s become a content player itself with LinkedIn Today, a customized newsletter, Influencers, its blogging platform, and recently Pulse, a mobile news aggregator. We know that Twitter and Facebook have been catering to journalists lately, but what does LinkedIn offer?

Yumi, tell us about your role there and how you think LinkedIn can help journalists? Do we really need yet another social network to use each day?

Betaworks is becoming a tamer of information overload, with a passle of news-flow tools including bit.ly for shortened links, Social Flow for promoting stories, Digg for story discovery, Chartbeat for instant traffic metrics, and now Instapaper for reading stories later. Plus, Betaworks is planning a replacement for Google Reader. Is Betaworks a media company or a business that helps manage media? Does their collection of tools add up to something bigger? Should media companies work with them or buy them?

Be sure to vote in our weekly poll, this time about the best social network for journalists: