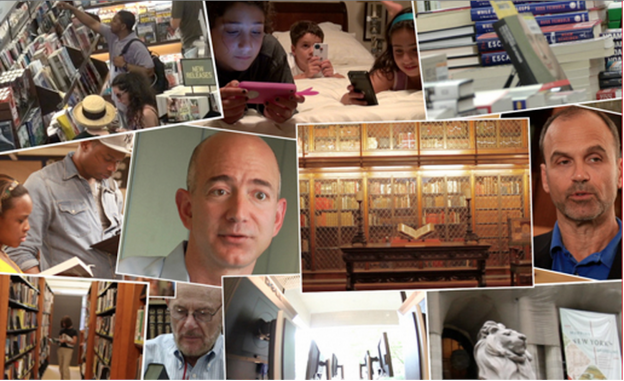 "Out of Print," by director Vivienne Roumani, which debuted April 25 at the Tribeca Film Festival.

People have used books as a reliable tool to transmit and preserve information, ideas, and stories for hundreds of years. E-books have enjoyed wide use for only about six years — counting from when Amazon introduced its Kindle in 2007. Yet e-books have rapidly upended so many facets of the traditional book world that the changes they’ve caused have inspired a documentary, “Out of Print,” by director Vivienne Roumani, which debuted April 25 at the Tribeca Film Festival.

Through interviews with historians specializing in the history of books, as well as key figures in publishing, libraries, schools, bookselling, and cognitive science, and by presenting statistics culled from recent literacy surveys, “Out of Print” presents a portrait of a literary landscape in the midst of rapid change, both positive and negative. The advent of e-books has made reading more efficient and affordable for many and has increased access to and acceptance of self-publishing.

But the troubling question 'Out of Print' poses is what sort of minds will the next generation have, if they are able to 'read' in the traditional sense at all?"

But on the other hand, “Out of Print” portrays young people who are unable or unwilling to read long sections of text, and can’t retain or synthesize the snippets of information they skim. “A book is something I’m being forced to read, so I spend my time thinking about how I’d rather be sleeping,” says one teenage boy in the film.

Another teenager describes the bewildering experience of visiting a library to conduct research. Although he may be hamming it up for his fellow interviewees, he describes it as “probably one of the hardest experiences of my life. There were so many books, each book specific to one thing. It’s not like you could find one book with everything that you needed in it. I was like, ‘this is terrible. I just want to Google it.’”

There are surely plenty of teenagers who have not so completely outsourced the contents and abilities of their brains to the Internet as have the kids in this movie, but it’s clear that this is a trend that’s taken hold since 2005, when “adolescents started reading more on the Internet than they did in traditional materials.” One literacy researcher describes the current generation not as “digital natives,” but as “digital doofuses,” who retain very little of the information they glean from skimming.

Amazon CEO Jeff Bezos, who has probably done more to push forward the adoption of digital reading than any other individual, appears several times in the film, and comes across as an affable guy with his goofy laugh and ardent enthusiasm for books. “When you get into an author’s words, you can forget about that physical object [the book]. It disappears, which is a fantastic trick for a technology, to be able to disappear like that,” he says. He believes he’s learned more from novels than nonfiction books, and cites the work Amazon has done to make a wide variety of books accessible to more people.

Still, Bezos doesn’t answer questions about Amazon’s practices and plans that some would like to ask him, such as Scott Turow, a bestselling author and the president of the Author’s Guild, who says, “I admire the creativity that Amazon has brought to the literary marketplace, and I despise the ruthlessness with which they act as competitors. They could do a lot more good with a little less savagery.”

Turow appears as one of the only figures in “Out of Print” advocating for maintaining some of the old ways in the book world, especially when it comes to respecting copyrights, as the new methods for publishing and purchasing books don’t provide adequate compensation for most writers. He also believes Amazon engages in “predatory pricing” and that “by selling front-list e-books low cost are creating artificial incentives for people to move from physical books to e-books.”

Robert Darnton, the director of the Harvard University Library, points out that while printed books can endure for hundreds of years, e-books pose new challenges for preservation, particularly because software and hardware become obsolete so quickly.

The adults will be just fine

Still, the sense you get from “Out of Print” is that the adults will be fine — those who read will continue to read in whatever format they choose, and Bezos, Turow, and a few lucky and talented self-publishing figures, such as Darcie Chan, whose novel “The Mill River Recluse” became a best-seller, will endure.

But the troubling question “Out of Print” poses is what sort of minds will the next generation have, if they are able to “read” in the traditional sense at all? “Out of Print” includes insights from researchers in child development and brain and cognitive sciences. As Nicholas Carr noted in his 2010 book “The Shallows: What The Internet Is Doing To Our Brains,” our brains are changing as we alter how often we choose to use them to read, and as we train them to rapidly access information on the Internet.

Several of the teenagers in the movie confess to feeling “addicted” to the Internet, as do some mothers interviewed. “This is the way I feel when I stand in front of the refrigerator,” one book club member says of her Internet use. “I can’t stop eating.”

“Out of Print” suggests that we’re all going to have to act like responsible parents, to ourselves and to our children, setting limits, if we want to maintain the heritage of philosophical and abstract thought, culture, and storytelling that the rich history of books has delivered us. Or maybe we won’t choose to maintain it. “Our brains aren’t designed to do any of this stuff,” one researcher says, referring to both reading books and using digital technology.

While “Out of Print” won’t provide many startling revelations for those who have followed the rise of e-books closely, it offers a crisp, entertaining, and thought-provoking account of the radical changes books and literacy have undergone in the last decade.