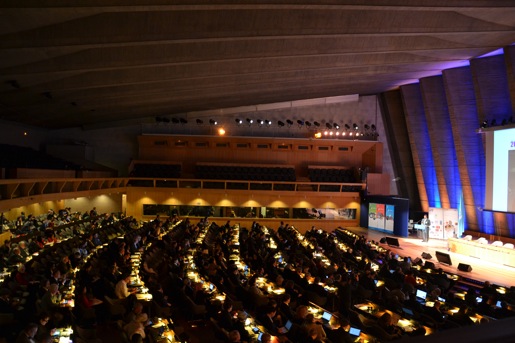 At the World Summit on the Information Society (WSIS+10), 1,400 people from around the world -- representing government, civil society, academia and the private sector -- gathered at UNESCO Headquarters in Paris. Photo by Barbara Dirrheimer of UNESCO.

After the death of Hugo Chavez was announced this week, individuals across the globe — from everyday Venezuelans to Barack Obama to Billy Bragg — took to the Twitterverse to comment on the late Latin American leader’s passing. Some mourned his death, while others expressed vehement support or outright rejection of his political ideologies. This mixed bag of reactions was evident among the tweets of U.S. politicians alone.

There is no doubt that today, Twitter, like numerous other social media services, has become a staple mass vehicle of communication, accessible by anyone with an Internet connection. The fact that heads of state can mount such an online podium — alongside ordinary citizens and rock musicians — to express their thoughts is a testament to the astoundingly open, global and democratic-seeming nature of the Internet.

While the boom in information [connects] the world in unprecedented ways, it's also been one with many gaps -- gaps in human rights, gaps in access, gaps in political influence."

But while the boom in information and communication technologies of the last decade has been a global one, connecting the world in unprecedented ways, it’s also been one with many gaps — gaps in human rights, gaps in access, gaps in political influence.

Those issues were top of mind last week at the 10-year follow-up to the World Summit on the Information Society (WSIS+10), when 1,400 people from around the world — representing government, civil society, academia and the private sector — gathered at UNESCO Headquarters in Paris to discuss how communication and information technologies have changed.

With the official theme “Towards Knowledge Societies for Peace and Sustainable Development,” the three-day conference, heavy on buzzwords such as “the mobile revolution” and “digital native,” drove home several central messages about the impact of information and communication technologies on our everyday lives and on our future prospects as a global society of interconnected citizens.

THE INTERNET AND HUMAN RIGHTS

During a session about the “DNA code” of the Internet, various panelists made the case for the Internet being a normative space meant to allow — in the words of American research consultant Avri Doria — anyone “to talk to anybody at any time about anything.” Although this freedom, she said, is being increasingly compromised by filtering and blocking practices.

Doria’s comment brought us back to the barrage of tweets following Chavez’s death and its embodiment of the seemingly horizontal if not anti-hierarchical nature of the Internet. But it also highlights an important point: that whether or not we agree that the Internet is inherently or “meant” to be pure and perfectly open, the reality is that it is not.

This belief was expanded upon by John Kampfner, European adviser to the Global Network Initiative in the United Kingdom, who said that the growing engagement of Western governments in blocking and filtering under the guises of national security and social cohesion (consider the controversy over SOPA, or reports of the FBI raiding homes of G20 protesters in 2009) inevitably gave “space for authoritarian governments … to claim ‘double standards.’”

In other words, the Internet is a political space, and it is subject to political negotiation and manipulation. How the Internet is built is the first element to consider when exploring how the web impacts human rights and vice versa.

Parminder Jeet Singh of IT for Change. Photo by Amy Hong

The second fundamental question is access, an issue also discussed widely at the conference. It is self-evident that for the estimated 4 billion to 5 billion people on Earth still not online — people for whom “Facebooking” and “tweeting” are not part of their everyday vocabulary — socio-economic and political conditions play an enormous role in their lack of connectivity.

As a number of WSIS+10 speakers highlighted, however, not having access to the Internet means much more than not having access to the Internet. As highlighted by Parminder Jeet Singh of IT for Change, the Internet is more “the principal means of communication and networking.” As important features of health, education and livelihood systems go online, those who lack Internet connectivity face an increasing disadvantage and are less able to enjoy their most fundamental socio-economic rights.

On the first day of the conference, a series of events preceding the keynote speech by economist and Columbia University professor Jeffrey Sachs amusingly and unwittingly illuminated the speedy pace at which information and communication technologies have penetrated our lives in recent years.

As Sachs began his remote participation via webcam, a booming echo was heard. As UNESCO sound technicians furiously sent the professor instant messages (visible to the entire audience) asking him to wait while they resolved the problem, the oblivious Sachs continued speaking. When it was clear that he could not see the messages, he was finally seen picking up the primitive-seeming telephone on his desk to receive the technicians’ communication.

In the course of less than two minutes, three communication mediums — videotelephony, online instant messaging and the telephone, all of which have been at one point or another my primary means of communicating with others throughout my life of 27 years — were put on prominent display. Throughout the conference, however, I realized that while the idea of picking up a fixed telephone in my house to call someone seemed consummately strange, it might seem just as bizarre to others in the world who have never had the luxury of any telephone.

Put another way, technology has penetrated the lives of people throughout the world in unequal, if not unjust, ways. This does not mean that we do not have every reason to be massively impressed when we hear stories of geospatial information technology being used by indigenous peoples in Chad to engage in participatory mapping of their lands, or of Dorothy Okello# of the Women of Uganda Network, who told the story of how equipping 30 women rural farmers with mobile phones led to increased agricultural productivity and feelings of confidence and empowerment. Stories about the development of laser cutters and rapid prototypers in fab labs also merit awe.

However, such evidence of how technology can positively impact people’s lives should not make us believe that they can only do good in the world. Criticizing this fetishizing tendency, executive director of IT for Change Anita Gurumurthy remarked that “today, everyone thinks that mobiles are meant for women and women are meant for mobiles.”

Lest we forget, technology should be seen as a means to an end, not an end in itself. What WSIS+10 helped explore is the progress the world has made in the last decade — and should make in coming years — in ensuring that technologies are harnessed to boost the quality of life of all the Earth’s inhabitants, and not just a select few.

Building Knowledge Societies in the Digital Era at the Nicaragua Dispatch

Photos from the WSIS+10 Review Meeting at UNESCO.org

Amy Hong holds a BA in Spanish and Latin-American Literature from New York University. In 2011, she earned her master’s in Human Rights from the London School of Economics, where her thesis research on France’s undocumented migrants won LSE’s prize for best human rights dissertation. She has worked as a consultant at the United Nations Population Fund, completed a traineeship in the European Parliament, and worked with NGOs in Argentina, Brazil and Kenya. Amy is also a Humanity in Action Senior Fellow and Rotary Foundation Global Grant Scholar, and is currently based in Paris, France.