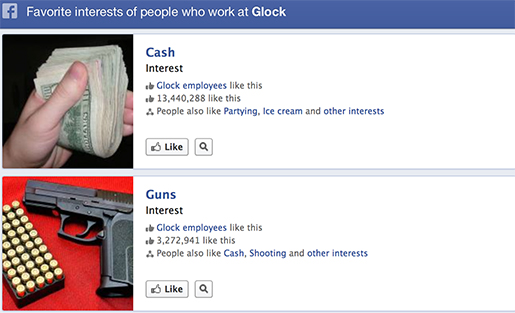 Glock is a weapons manufacturer headquartered in Deutsch-Wagram, Austria. According to the new Facebook Graph Search, employees of Glock love cash and guns.

The new Facebook Graph Search, currently in beta and only available to some, is a powerful search engine capable of revealing and uncovering incredibly detailed information about you, your friends and total strangers. It allows you to search for fun facts like “Former actors who are currently employed as waiters,” “Which games do Dutch Defense Ministry employees like to play?” (Battlefield and Call of Duty) and “People who like Lance Armstrong, who like steroids and who like fairy tales.”

But the new search engine goes beyond the level of providing “funny” lists or surprising your friends with intimate knowledge about them.

We can soon find connections, relationships, similarities and correlations that previously were unimaginable. Perhaps worse, we never imagined others would be able to discover so much information about us."

The success of Facebook Graph Search lies in our own love for Facebook. We, the public, are the ones who published this wealth of information on Facebook. Graph Search is merely using everything we already, and voluntarily, made public ourselves.

On the other hand — how many of you think about the consequences when liking and linking a page or when writing down your interests or telling your activities? And who in the world looks at what he wrote a year ago?

Facebook enables its users to hide personal details from the Graph Search, but the process is not a simple one, requiring substantially more than just one click. For a quick reference guide on how to protect your privacy, check this manual, still a work in progress.

I think the new Facebook Graph Search will shock some people. It can — and probably will — serve as a mirror to the public. But at what cost?

Graph Search becomes a full-fledged intimidating tool once we start to trace people with questions like “Single detectives who like Scientology,” “Widowed people from New York who like psychotherapy and visit bars” or “People who work for Apple AND work for Google.”

Using Graph, we can pinpoint people who meet certain criteria or who have certain interests, as well as certain connections.

Let’s start with a general query like “People from the United States.” We can now drill down on 11 relationship details, including sensitive details about our private lives, such as Divorced and Widowed. Drilling down on Muslim, Conservative is easy too:

This way we can generate a list of Conservative Muslims from the United States.

Facebook Graph Search invites you to play around with that list and find additional personal details. Which locations do you want to see that Conservative Muslims from the United States tend to visit, for example?

And which bars (current and former) do American employees of arms manufacturer Glock like to visit? Facebook Graph provides the answer within seconds.

So if you are targeting specific people who work for a particular organization, with a specific interest, Graph helps you to do just that.

Now imagine you are not a decent person. Let’s assume you want to find out information about people that could, for example, incriminate them.

Or maybe, you, the criminal mind, wants to check out police detectives and uncover their flaws or vulnerabilities.

In this case, it might come in handy to trace all “single men who work for the government and are detectives.” You could subsequently uncover their likes, dislikes, and biography.

The number of possibilities this new Facebook tool provides is endless. As an employer, for example, you could use Facebook Graph to find out information about your employees, or about your competitor.

Likewise, we could look for people who work both for Google and Facebook, but probably never told their bosses.

And have you ever wondered who among your colleagues are fans of guns, as shown here at the University of Amsterdam?

Or let’s find people who work for Mitt Romney, but who did like Barack Obama. Now we get a list of eight people who like Obama but who work for Romney. Which people work for Obama and Romney at the same time? Half of the entries seem to be fake; the other half seems interesting enough for further research.

While much of the information on Facebook is reliable, remember that not all results are true. There are people who are faking identities, and also the information they provide may not be true. And “likes” can by clicked by accident.

Nevertheless, we can soon find connections, relationships, similarities and correlations that previously were unimaginable. Perhaps worse, we never imagined others would be able to discover so much information about us. Facebook is opening up a gigantic database with billions of personal details.

The Medialab at VVOJ, the Association of Investigative Journalists for The Netherlands and Belgium, created this video about Privacy and Facebook Graph Search.

Dutch born Henk van Ess, currently chairs the VVOJ, the Association of Investigative Journalists for The Netherlands and Belgium. Van Ess teaches internet research & multimedia/cross media at universities and news media in Europe. He is founder of VVOJ Medialab and search engines Cablesearch.org or Facing Facebook. His current projects include crowdsourcing for news media, fact checking of social media and internet research for seasoned reporters.