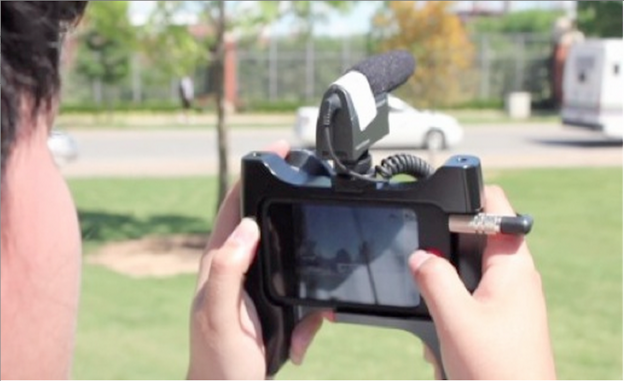 As part of the mobile reporting class at Gaylord College of Journalism, 17 journalism and meteorology students were geared up with iPod Touches, shotgun microphones and mobile hot spot devices for Oklahoma's severe weather season.

Disaster events since the mid-2000s paint a reliable picture on the relationship between breaking news events and mobile users. Whether it is images of passengers standing on the wing of a downed plane in the Hudson River, videos captured by locked-down Virginia Tech students, or security camera images of the I-35 bridge collapsing into the Mississippi river, cameras are everywhere capturing news events.

Our students beat every news organization in publishing on-the-ground, real-time information and media to the public by hours."

Although “social media” are given credit, this paradigm shift began before Facebook, YouTube, or Twitter were established. On-the-scene videos from the 2004 Indian Ocean tsunami were so popular the surge in traffic crashed the sites hosting them. Hurricane Katrina illustrated how local bloggers were more accurate and timely than local news in providing information about exact locations (down to street intersections) to a beleaguered public. Survivors of the London bombings uploaded videos as soon as they gained satellite access above the underground transit tunnels.

We developed the mobile reporting class at the Gaylord College of Journalism at the University of Oklahoma in order to understand this changing news environment better. Along with 17 journalism and meteorology students geared up with iPod Touches, shotgun microphones and mobile hot-spot devices, we waited for the Oklahoma severe weather season. During the wait, we began to develop principles on how to report with the technology most everyone carries in their pocket. This trial period also included working out bugs with our mobile app and location-based website, both branded as OU StormCrowd.

The class’ greatest challenge came on Friday, April 13, 2012, when an EF-1 tornado tore through Norman, Okla. By the end of the day, StormCrowd mojos filed reports from all parts of central Oklahoma and from every critical location of the storm’s damage. The most compelling report was an interview with a homeless couple caught eerily exposed to the tornado as it approached the city park where they were staying.

The mobile reporting class did not, however, have a noble start. Instead, it began as an argument.

In 2011, we locked into a debate on whether or not iPhones could produce media worthy of professional news standards. We stuck to our old journalistic silos with the former Chicago Tribune reporter insisting smartphones could — and should — be used as a cheap and efficient newsgathering tools and the former TV photojournalist responding, “No way! The quality is too low.”

It took a year of endless meetings and one tornado, but we now know what we probably could have guessed: Each technology has limits. The question is not whether smartphones can be used for newsgathering, but rather when it is the best journalism tool and how that tool should be used to meet professional standards.

(For more on iPhone reporting, check out Neal Augenstein’s stories for MediaShift about how he uses an iPhone for radio reporting.)

Here are a few key things we learned:

1. Determining when immediacy trumps storytelling. The student mobile journalists were tasked to quickly find the area most affected by a storm, take photos, gather basic information while they searched for the people affected. The only difference in these orders from any other type of reporting is the deadline. We directed the students to emphasize immediacy over story and to report every time they had a new piece of information or image. This is a different mindset than working, under rolling deadlines, towards a complete story. The conceptual idea, then, was to gather and post information and media constantly regardless of how any of it would fit into a narrative. The storytelling could come later.

On April 13, the emphasis on immediacy over story paid off. Our students beat every news organization in publishing on-the-ground, real-time information and media to the public by hours. Storm and damage reports landed on StormCrowd’s website and Twitter feed a full hour before the Weather Channel tweeted news of a possible tornado headed to Norman. By Monday, most of our competitors were following the StormCrowd Twitter feed.

2. Limitations are coded into any platform. OU StormCrowd was limited by the platform it was built upon — Ushahidi. While Ushahidi is a perfect tool for mapping text reports, it was never meant to deliver video content. To get around this problem, students posted their videos to YouTube and then copy-pasted the link into a field provided in the app.

This procedure, though, is not ideal. Adding any step to publishing news defeats the original goal to report as professionally and as close to real time as possible. To date, there is no mobile app that provides easy to record, easy to write, and easy to post efficiency for journalists, although both YouTube and Avid are getting closer. We, too, have been working with programmers and developers to bring the right tool to this task.

3. Get close, get steady. The smartphone camera has one clear limitation: It does not come with a host of lenses (although there are second market lenses). In old-school terms, the optics of an iPhone camera lens leans to the wide side of focal lengths. Zooming in digitally is the same as cropping in Photoshop and does not produce, as optical zoom lens do, changes in depth of field and f-stops. Digital zooms also intensify the main weakness of any smartphone camera — shakiness.

The best practice in shooting video or image with a cell phone camera, then, is to get close and get steady.

Getting physically close to the people or objects in your shot mitigates the shakiness of the shot. A cop car or fire engine in the foreground will draw the viewer’s attention away from the shakiness of the first responders and the house in the background. You can try this on your own. Take a video of your own house from the street without any object or person in the foreground. Then move close to the mailbox and put it in the foreground of your video. Comparing the two videos will show how the mailbox, psychologically, anchors the image, leaving the shake in your hand less noticeable.

To take your smartphone photos skills to the next level, use your mailbox as a tripod. You can lean your shoulder on the mailbox, put the camera on the top of it, or put your back on it. It is surprising, once you open your eyes to them, how many “tripods” there are in the world: tables, car hoods, curbs, trees, trash cans, etc. Throwing a small Steadybag (basically a bean bag) into your car will help stabilize your videos even further.

In 2013, Mobile Reporting version 2.0 will launch. We are working toward developing better mobile apps and newsgathering practices. We are not alone. Apple, Google, YouTube, Samsung, and Sony — to name only the big corporations — are working on getting smartphone camera technology more sophisticated and easier to use. Simply put, the debate is over. It is time to realize that the phone in your pocket is a newsgathering tool. Now, let’s start to figure out exactly when and how it should be used.

Julie Jones is an associate professor with the Gaylord College of Journalism & Mass Communication. Her teaching and research interests are centered on mobile and multimedia journalism, virtual communities and mass media organizations, and participatory forms of news production from the “audience” side. She, along with John Schmeltzer, are the founders of OU StormCrowd, a place-based video reporting tool for mobile devices. Jones is also national chair of the National Press Photographers Association’s (NPPA) News Video Workshop and one of the first 10 Outstanding Faculty Member Award winners from Kappa Alpha Theta.

Pulitzer Prize-winning journalist John Schmeltzer is the Engleman/Livermore Professor in Community Journalism. Schmeltzer held numerous positions during his 35-year career at the Chicago Tribune from political writer during the mid-1970s to assistant business editor in 2008. He was instrumental in expanding the readership of the Tribune by developing a suburban version of the newspaper for which he served as associate metropolitan editor from 1976 to 1991. From 1997 to 2003, he covered the aerospace industry and covered many of the events that led to the Tribune being awarded a Pulitzer Prize in 2001. In recent years, Schmeltzer has worked to expand readership through social media and online newspaper editions.