5 Pitfalls Hulu Avoided That Could Have Killed It 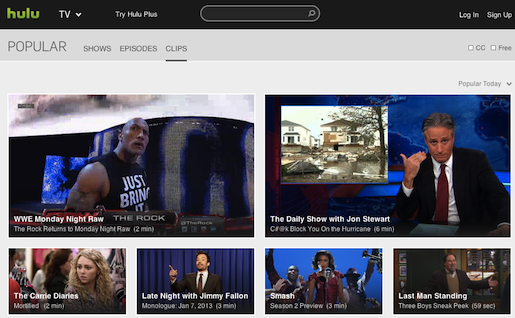 What Hulu did not do during Kilar's tenure was more important in many ways than what it did do.

Jason Kilar’s departure from Hulu has prompted many retrospectives on his time at the premium video service. Staci D. Kramer wrote a nice piece on MediaShift about the emphasis on user experience. That’s a good place to start. I think what they did best was focus.

Often, what not to do is more important on a day-to-day basis than what to do. Below are five things Hulu did not do under Kilar’s leadership — mistakes that could have tanked the company.

Instead of playing follower with useless features like tag clouds, Hulu innovated often with 'lower the lights' and clip sharing."

Let’s look back to 2007, the year Hulu launched, when people still talked about companies like Joost (below), Veoh and Revver. Roku made only well-designed little music extenders, and Netflix only shipped discs. What could have sunk Hulu?

In 2007, while I worked at online video platform Brightcove (I’m now president of user experience design and development firm Cainkade), we launched its consumer-facing video site. We originally planned for the consumer site to be a showcase for finding and watching professional and premium content, but YouTube’s success influenced us heavily. We found it challenging to resist chasing some of YouTube’s features, and opened up the site to personal publishing. It was easy to get caught up in the hype around user-generated content at that time. Microsoft had just launched it’s ill-fated Soapbox, and there were a handful of other smaller sites that were compelling but ultimately failed. It’s impressive that Hulu kept the focus on premium content. User-generated content would have poisoned the site.

One cable exec I talked to a few years ago said they were trying to push Hulu and others to just syndicate their video player. It would have streamlined a lot of the file-based distribution problems in the premium landscape. And it would have accelerated “TV Everywhere” to market by reducing the complex security problems that held back (and continue to hold back) that initiative. If Hulu had given in, the site’s user experience would have been a mess. Fragmentation of the player implementation would have made the advertising innovation that Hulu became known for impossible to achieve.

Hulu has experimented for years with unique advertising formats such as AdTailor.

The peak of MySpace’s power and hubris and the beginning of Facebook’s explosive growth was in 2007. New media sites were betting heavily on social experiences — subscribing to and following other users, sharing their own content, curating experiences. Hulu gradually added some light social features. But it was smart to never emphasize that layer of functionality over video discovery and playback.

I saw dozens of RFPs (requests for proposals) at Brightcove that required marginally useful but trendy features like tag clouds. I would ask clients, “Why a tag cloud? How will it factor into your success criteria?” or “instead of this tag cloud, perhaps we should discuss your terrible SEO implementation?” When pressed, clients would respond one of two ways — our competition has it, or just build it because it’s in the already-approved requirements. Instead of playing follower with useless features like tag clouds, Hulu innovated often with ‘“lower the lights” (which I never loved, but was attention-getting) and clip sharing (below). Enabling sharing of video segments made Hulu a popular source for bloggers and viral embeds — often better than the source network’s site itself.

Sharing snippets of video made Hulu a popular choice for bloggers.

This is a supply-side problem driven by vendors. Every new technology vendor you look at is a potential time sink. First, there are the meetings and exploration. Next, if you pursue a relationship there’s the evaluation period. Then negotiation, integration, relationship management, maintenance, documentation. You better be really sure about the need for a new feature before spending tens or potentially hundreds of person-hours on a new integration. One of the inside jokes we had at Brightcove was about video hot-spotting technologies. A new one seemed to show up every 18 months, like clockwork. And they were never very successful. It’s rarely a good idea to add unnecessary complexity to your financial lifeblood — calls-to-action, e-commerce or advertising features. Hulu was no doubt pitched by dozens of video tools vendors. It’s tough to say no, but they appeared to have done so more often than not.