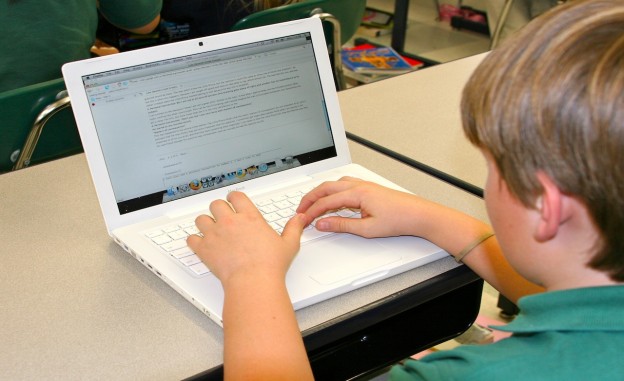 Photo of student on laptop by Karen McMillan on Flickr and used here with Creative Commons license.

As an Internet safety advocate, I’ve spoken to hundreds of parents who are at a loss as to how to equip their kids with the right “life” tools they’ll need to embrace all the challenges and opportunities technology can bring. It’s no wonder that when the Natick school district, located just outside of Boston, first announced in 2009 that its students would be receiving laptops for school use, parents — including myself — were concerned.

The school district was planning for the construction of a brand-new high school designed to support its students’ future success. Technology, specifically in a 1:1 environment would be a critical tool for this initiative. The Natick public schools named the undertaking a “Digital Conversion.”

The goal of the Digital Conversion is to transform the education experience by upping the ante on technology and using it in a way that propels students to succeed in the 21st century."

The goal of the Digital Conversion is to transform the education experience by upping the ante on technology and using it in a way that propels students to succeed in the 21st century. Specifically, Natick chose to distribute district-owned MacBook laptops into the hands of all its students from grade eight through 12 as part of this endeavor.

Because of this, I decided to get directly involved in order to better understand how the Natick district was planning to use technology within its schools. With a pilot year successfully behind us and the Digital Conversion underway, I believe Natick is set up to successfully do what it has set out to do. It’s an accomplishment that is achievable by others as long as there is a desire among the administration, educators, parents, and community to work together. Here are a few things that you should consider if you’re planning your own Digital Conversion.

At first, the name Digital Conversion seemed an odd choice to me. But as I came to understand its goals, I realized it was a wise one. The name signals something much bigger than laptops or new technology. The program was going to be transformative and would demand a change in mindset from all involved. A small detail like a program name can help keep stakeholders focused on the goals versus the tools. I even heard a few skeptics who thought it was an unproven, costly experiment at the expense of local taxpayers and nothing more.

The purpose isn’t to put a laptop in every kid’s hands — it’s to open up new and better ways of teaching and learning. Technology can help enable this, but nothing will happen without trained teachers, a competent technology department, strong leadership or parent support.

Before rolling out the program to a larger population of students, Natick began a pilot program from 2011 to 2012 that included approximately 300 eighth graders who, after that year, would enter high school already familiar with the technology. While teachers throughout the district had already been using their own laptops for a few years, the pilot year gave the district a chance to iron out logistics such as technical support, charging stations, and transporting or replacing laptops. It also helped them understand how teachers could best manage a classroom with a laptop in between them and their students.

For me, this was also a chance to understand if and what parent resistance or concerns might be among a smaller population of parents. We were, after all, introducing a powerful tool students could use at home.

I heard a range of worries: What happens if my child breaks or loses it? Would he really be paying attention in class anymore? What if she accesses inappropriate content or uses it for something other than schoolwork? What about my child’s posture, carpal tunnel syndrome, and eye strain?

The district surveyed parents during the pilot to get a better sense of the concerns. They kept me informed of those issues, particularly in the areas where I could best help. I do think most parents were generally anxious but enthusiastic about the program and appreciated being involved along the way and having their questions answered. You can’t over-communicate.

During the pilot, when people in town heard or talked about the Digital Conversion, the conversations were mostly filled with unanswered questions. Why were we doing it? What was it going to cost? Why now? With a new, taxpayer-funded high school under construction it seemed like a lot to take on simultaneously. As a witness to the amalgamation of a new building and a Digital Conversion over the last two years, I understood — it was a monumental task.

To assuage everyone, the district did an enormous amount of education for the town — the eighth grade families, students and faculty — on the impetus for the Digital Conversion and the resources and logistics it would require.

They offered a variety of methods to keep people updated: face-to-face meetings, online access to presentations and relevant data, printed material, email newsletters, and a community blog. As a working parent of two kids, I appreciate this. Sometimes, digital communication is the only way I can possibly stay informed. Other times, I can make the 7 p.m. meeting at Town Hall.

The pilot for the Digital Conversion was a complex program that would impact everyone in the town of Natick and needed a strong communication strategy to support it. With so much information to relay, providing regular updates in multiple formats was the surest way to keep teachers, parents, students and others in the community up-to-date and minimize any concerns and surprises.

While the school prioritized helping students and teachers prepare for the 1:1 program, the parents’ role in the process was critical to its success. This was not just a matter of keeping them informed of how our kids would be using the laptops in the classroom or addressing their concerns about the care and keeping of the laptops.

A successful Digital Conversion had to include a focus on digital literacy, online safety, and digital citizenship, and these topics needed to be taught and reinforced at home as much as in the schools.

I saw the pilot as a chance to have critical, ongoing conversations with parents about the role of technology beyond the classroom: the opportunities it presents for our kids, the inherent risks associated with it, and the guidance and lifelong skills both parents and students need to use it successfully.

As a parent in the community, I had a shared interest in seeing the 1:1 program succeed and gain acceptance among the students’ families. But some of the issues I felt needed to be addressed were outside the school’s responsibilities. It’s a message that had a better chance of being heard if it came from a peer versus someone from the schools.
Working simultaneously with the district, I was given the opportunity to communicate with parents through several face-to-face sessions designed to enhance what the district had already done. During these sessions, I focused on issues kids might face anywhere online: social media interactions, privacy, identity theft, copyrights, cell phones, and many other topics relevant to responsible digital citizenship. I also contributed content to the official handbook that would accompany the laptops during the pilot and the larger roll-out one year later.

Together with the local Parent Teacher Organizations, I’ve been invited to speak several times since, and have extended my reach into the elementary school levels so that parents are informed well ahead of their kids’ introduction to the 1:1 program.

4. Have faith in the future

This past fall, Natick High School opened its new doors. It’s a beautiful physical space where any student would be excited to learn. The Digital Conversion now includes all students grade eight to 12, expanding its reach by sixfold to approximately 1,800. In these first few months, there have been some minor challenges, but no great setbacks. Students have embraced the program, to the point where some teachers have noticed how much quieter the hallways and classrooms are. Natick has even been recognized by ProjectRED as one of the nation’s 10 signature districts for its vision, goals, and implementation of its 1:1 program. The goal of ProjectRED is to study leading programs across the country and develop best practices so the tens of thousands of other districts in the nation can benefit.

Some of those best practices are outlined here. Some we have yet to learn. There is talk of extending the reach of the program down into the lower grade levels over time. It’s still early in Natick’s Digital Conversion, and during my year and a half tenure with it, I am extremely optimistic for the town, for my own children, and for the possibilities it holds for the future of students of Natick.

Lynette T. Owens is the founder and Global Director of Trend Micro’s Internet Safety for Kids and Families (ISKF) program. After many years in technology marketing roles and serving as Associate Vice President of corporate marketing for Trend Micro, Lynette founded the ISKF program in 2008 to help deliver on the company’s vision of making a world safe for the exchange of digital information. The program is now active in 19 countries. As a pro-technology parent and Internet safety advocate, Lynette spends most of her time raising awareness and educating the public about the safe and responsible use of the Internet, recruiting fellow employee volunteers to get involved around the world, or volunteering her own time in her community in Natick, Massachusetts.