Two-Thirds of Frontline Programming is From Collaboration 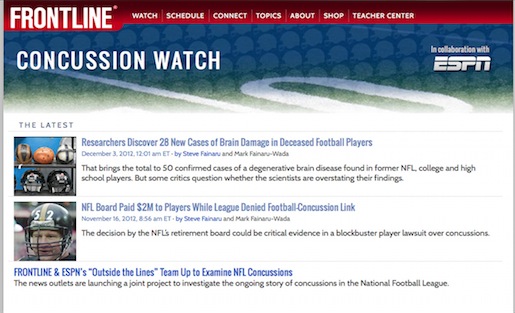 Concussion Watch, a joint Frontline/ESPN investigation into brain injuries among NFL football players, is just one example of Frontline's many editorial collaborations.

Approximately two-thirds of Frontline programming is produced through some form of editorial collaboration, said Raney Aronson-Rath, the series’ deputy executive producer, when we spoke last week by phone.

I see partners bringing so much to the table that I think we can collaborate and be competitive at the same time." -Raney Aronson-Rath

In recent years, some of the series’ more high-profile investigations have also been produced as collaborations, including Post Mortem (with NPR, ProPublica, the Investigative Reporting Program at the UC Berkeley Graduate School of Journalism, and California Watch) and Law & Disorder (with ProPublica and the New Orleans Times-Picayune).

By “editorial collaboration,” Aronson-Rath means reporters and editors at partner organizations working together — “being colleagues to each other.” She differentiates this form of collaboration from what she calls “institutional partnerships.”

“Our relationships are truly editorial first, then the institutional relationship comes,” she said, noting that series executive producer David Fanning has championed collaboration for years. In the case of Concussion Watch, for example, the collaboration came about because journalists at Frontline and ESPN shared an interest in the story, and Frontline recognized that ESPN reporters Mark Fainaru-Wada and Steve Fainaru were “the leading journalists looking at brain injury in the NFL.” Thus, the two organizations began working together.

There’s No ‘Project Manager’ in ‘Team’

Building an effective collaboration “is about creating a team,” Aronson-Rath said. “The producer has to actually want to work with the reporter…It takes a certain kind of producer to do this — it’s not for everyone.”

Aronson-Rath is very active in managing Frontline’s collaborations — “it’s a great deal of my time,” she said.

Do you hire project managers, I wondered? No, Aronson-Rath told me, because “we don’t have budget, but also because I think it doesn’t work.”

“Many conversations are happening in a collaboration,” Aronson-Rath explained. “One is between the editorial bosses … We’re all talking, and we’re also talking to reporters and producers who work for us directly, and they’re talking to each other … Sometimes we all get together on the phone. It’s hard to then insert another person who isn’t in that organic pot to try to manage us.”

“When (collaboration) works is when the people actually doing the actual work are invested,” she continued. “We’ll make it work. You don’t need to manage us.”

The Importance of Personal Networks

“Collaboration takes a great deal of trust-building,” Aronson-Rath told me. “It’s a leap of faith,” and it’s easier to manage “after doing a lot of projects together.” For example, Frontline has been working with Steve Engelberg since he was at the New York Times; he’s currently at ProPublica.

So, how do you build that trust with a new partner like ESPN? Actually, “there were some built-in relationships there,” Aronson-Rath said; Frontline’s managing editor already knew Fainaru-Wada and Fainaru, as well as a top editorial staffer at ESPN.

I observed that collaborations seemed to depend on the personal networks of Frontline’s staff. Aronson-Rath said that wasn’t quite right. While all of the series’ collaborations “come down to professional relationships,” some of those relationships are built in, while others, she said, are forged.

“We track all of our stories with our partners and put it on a chart,” she explained, which offers an “incredible visualization” of our partnerships. Aronson-Rath loves seeing “the extended circle of colleagues” and “the intelligence we have under the umbrella of Frontline” — it’s a “great asset.”

Law & Disorder was a collaborative investigation between Frontline, ProPublica and the Times Picayune

“Our very nature as journalists is to be competitive, to be the best” she added. “I’m very competitive on Frontline’s behalf. But what I see is, I see partners bringing so much to the table that I think we can collaborate and be competitive at the same time. We can make better journalism, break new ground.” While it may be a lack of resources that prompted journalists to begin working together more, “now that we’re doing it, it’s just about making journalism better.”

More Collaborations Than Ever Before

In a previous article on Collaboration Central, Carrie Lozano quotes Aronson-Rath as estimating in October 2010 that about one-third of the series’ work is produced through collaboration. Now, just over two years later, that estimate has doubled. Why is Frontline collaborating more today than ever before? It comes from an “interest in increasing our visibility on the investigative journalism front,” Aronson-Rath said, as well as an availability of journalists at organizations like ProPublica who are doing in-depth, long-term pieces that fit with Frontline. In addition, increased collaborations mean more opportunities to “break investigative news, get more attention, and expand our brand.”

The more Frontline has collaborated with partners whose publishing schedules differ from their own, Aronson-Rath told me, the more they’ve acclimated to the idea of releasing news online ahead of its broadcast. In the case of “Concussion Watch,” for example, the completed documentary isn’t airing on PBS until the fall of 2013, but Frontline and ESPN have already published several stories, including one on Monday about researchers discovering 28 new cases of brain damage in deceased football players.

Traditionally, said Aronson-Rath, Frontline would have waited until next year, when the film was airing, before announcing the partnership, let alone publishing news. Now, they understand that publishing early allows the journalism to “bubble up in a more organic way” — “building something in the open generates new tips” and “strengthens our journalism.” Aronson-Rath and her team have also found that publishing news ahead of air actually “builds attention to Frontline” and “builds audience.”

“Frontline is no longer a film series that shows up on a Tuesday night,” Aronson-Rath said. “It’s actually an idea — it’s Frontline all the time. Our partners help us with that.”

“It hasn’t once backfired,” she added. “That’s not to say collaborations are easy, but none (of ours) have backfired.”

I asked Aronson-Rath what she knew today about collaboration that she didn’t know 10 years ago. “I had no idea of the potential,” she said. “I didn’t understand how many different people we could collaborate with. Now I feel we can be so ambitious about these collaborations and be out of the box and try new things.”

So, what’s next? “We’re striking another new partnership with Univision,” she told me. “It’s an incredible look at the lack of rights of undocumented women.” The partners will co-present, with each creating its own film (the Univision film will be in Spanish), and the films scheduled to air the same night. The project “requires a great deal of coordination,” she said, noting the challenges of managing production of two films at the same time. The project came about because two of Frontline’s reporters were interested in the issue, and approached the head of documentaries at Univision, with whom Aronson-Rath subsequently met. Her primary objective at that meeting was to find out, “do we see editorially eye to eye?” They did — once that was established, the organizations could move onto conversations “about logistics and practicalities and contractual issues.”

So, what advice does Aronson-Rath have for journalists who are new to collaboration? “Make sure there’s a genuine meeting of the minds on the journalism,” versus an abstract idea that it would be nice for two organizations to work together. For example, does your potential partner have similar journalistic standards — similar vetting policies, similar ideas about fairness? In Frontline’s case, if they find that the heart of a potential partner’s mission is advocacy, they know the relationship won’t work, since “the heart of our mission is journalism.” It’s crucial, she says, to make sure you have the same journalistic ambitions. “There will never be a time that I work with people who I don’t think are responsible journalists — people we have a kinship with on the journalism level,” she said.

“We don’t collaborate for collaboration’s sake ever. We only do this when it’s right. We do it a lot because it’s right a lot.”