Thom Powers: For Film Festivals, Twitter Is Mandatory, Apps Are Not 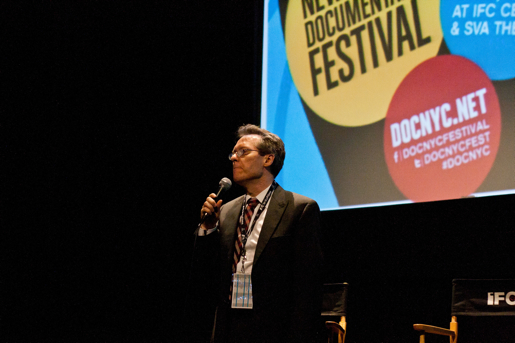 I sat down at DOC NYC last week to speak with one of the most influential men in documentary film, Thom Powers, about the role social media and digital are playing in film festivals. Powers is not only the artistic director of DOC NYC, but is a programmer at the Toronto Film Festival, Miami Film Festival, Montclair Film Festival, founder of the NYC documentary screening series, “Stranger than Fiction,” and a curator at SundanceNow.

The following is an edited transcript of what Powers had to say.

These days I'm always surprised when I encounter someone that's not on Twitter who has a job that's meant to be communicating with people." -Thom Powers

You began your career as a filmmaker. How did you transition into becoming a film festival programmer?

Thom Powers: I made films for about 10 years at HBO, PBS and other places, and I was just looking to do something a little bit different. My own personality is more attuned to having an eclectic set of things going on. What I like about programming is the thinking about several different topics at once — whereas making a film requires an intense concentration on one subject for a year at a time or sometimes longer.

Currently you program for festivals such as the Toronto, Miami and, of course, DOC NYC as well as others. Do you see yourself as shaping the landscape of the industry?

Powers: I hope so. That’s the goal, but some of that takes time. Now that I’ve been doing Toronto for seven years, there’s a following there. People have seen what I’ve programmed before, so they know if they like it or don’t like it. They know if they can invest and take a chance on something they’ve never heard of because they’ve liked what they’ve seen before at the festival.

What influences the “Thom Power Voice”?

Powers: I think the name of our series, “Stranger than Fiction,” embodies the chief quality that I love so much about documentary film, which is that to me, it’s more compelling, more entertaining and more resonating than anything you can make up.

You’re very active on Twitter, and certainly the way festivals can present themselves to audiences and interact with them has changed with the introduction of social media and digital technologies. What’s your approach to integrating technology into your work?

Powers: Regarding tech, I consider myself about in the middle of the pack in being on top of this stuff. I wouldn’t call myself a leader, but I pay attention to what seems to be catching fire and I try things out. These days, I’m always surprised when I encounter someone that’s not on Twitter who has a job that’s meant to be communicating with people. It doesn’t surprise me my mother’s not on Twitter, but when a festival programmer’s not on Twitter, I think you’re missing out on one of the great new tools to be doing your job, which is to be having a conversation with an audience.

Do you see any downside to the role social media is playing in festivals?

Powers: Sometimes it drives me nuts, like at Cannes where a film has been 10 years in the making and people put a thumbs up or thumbs down on it two minutes after it comes out. I don’t think Twitter is a good venue for passing judgment on things. It is a good venue for pointing at things.

Traditionally film festivals were often a film’s first exposure to press, the public and the industry. Do you have recommendations for filmmakers to utilize digital and social components to enhance their exposure at the festival?

Powers: Some basic advice I would give to filmmakers is to keep the trailers short — one or two minutes. I don’t think anyone needs to see more than that. And put thought into them the same way you put thought into your film.

I think what’s important for a filmmaker to remember is you can’t rely on just one thing. It’s not just about a social media strategy, but also thinking about print and press opportunities. At the same time, you can’t just think about a traditional approach; you have to incorporate social media, with the basics being Twitter, Facebook and YouTube. If a filmmaker isn’t at least covering those three bases, they are a step behind.

It’s also about building a database. It used to be two tools you needed as a filmmaker: a camera and an editing machine. Now there’s a third tool, which is a database of your followers, and not just for one project but as something you’re going to nurture and grow for your career. I think this is a new approach, because the old approach was to think about this as film-to-film.

Attendees and panelists wait for a panel to begin at the DOC NYC Festival last week. Photo by Amanda Lin Costa.

At the Get the Money: Tap into TV panel earlier at DOC NYC, they warned filmmakers of being precious with their footage and film because too much exposure of content online may not allow a network to feel it can offer exclusivity to its viewers and cause it to pass on a project. Is that similar advice you’d give as a festival programmer?

Powers: Yes. Who wants to buy a ticket at a premium price at a film festival if it is something they can watch online? The thing that is important to spell out, especially to short filmmakers who are more prone to, “Hey, let me just put my film up on YouTube,” which is fine if you want to do that, but if having a festival window is important to you then take that seriously and do that first.

As a programmer, does online “buzz” such as a successful Kickstarter campaign or large social media following come into play when you’re selecting films?

Powers: I pay attention when I see a film has generated a lot of interest. For example, last year when I programmed “First Position“ for the Toronto Film Festival for its world premiere, I was aware that before anyone had even seen this film it had 5,000 Facebook followers. That wasn’t a decisive factor in making me program the film, but it gave me encouragement that I could put the film in a bigger house.

From a film festival’s perspective, what is the most important digital tool that can be utilized?

We keep archives of past festivals on our websites because we think that is of interest, and we grow the quantity of video on our websites. We market different films to niche audiences and market the idea that documentary film is a great way to spend your time — period.

Do you see film festivals moving toward building and utilizing apps?

Powers: Toronto has done an app. I think apps for festivals are still at a prototype stage. I downloaded the Sundance app when I was there, but didn’t really use it — though I’m sure some people did. Apps are a very expensive thing to create, and I think the jury is out on how worthwhile they will be. It’s hard to use an app effectively for a short-lived event. The idea that someone is going to download an app that’s going to only last 10 days, well, then what are you going to do with it?

Are there other ways digital technology has changed the film festival landscape? Certainly the larger festivals, such as Toronto, have been an important market for buyers. Do you see a shift from that physical presence with online access increased?

Powers: No. At the bigger festivals — Toronto, Sundance and Cannes — it’s the same acquisitions people lining up to get into a theater. What has changed is if they don’t get in and the film hasn’t sold, they can contact the sales agent to get a password link.

The fact that some things will sell going into the festival has always happened. That’s up to the sales agent — if they think it is more advantageous to sell before the festival because they think their film might get lost in the festival. I think the wonderful thing about online access, especially with press, is if a journalist called me up right now and said, “Hey, I want to write something about Shepard and Dark this weekend,” I don’t have to worry about having to send a courier with a DVD. I can send a link.

We spoke earlier about how you’re active and accessible on Twitter. Is your role as a programmer and curator a 24-hour-a-day job now, existing long after the festival closes?

Powers: If there is a film I’ve curated, when it comes out, as long as I get a reminder from the filmmaker, I’ll spread the word via my networks. I frequently maintain contact with filmmakers, and they come to me for advice. I have this privileged position because I deal with so many filmmakers and programs and about 150 films a year between the different festivals. I deal with all the distributors and all the sales agents. I talk to these people in a way few other people do.

I’ve watched, in the eight years I’ve done “Stranger than Fiction,” the lifespan of a film. I’ve seen films launch an audience. I’ve watched what the expectations were and whether those expectations have panned our or didn’t pan out. I do my own casual analysis of what’s happened so when filmmakers come to me, I can give them pretty good input into what they should be looking out for and where they should be setting their expectation, and how they can best achieve their expectations. I do that on a year-round basis. I might program a film in September in Toronto and be talking to the filmmaker the following April as the film is getting ready to come out to theaters.

Do you have any advice to share with filmmakers on how to interact with either yourself on Twitter or other programmers?

Powers: Programmers circulate like the honeybees in this industry. We’re talking to everyone … definitely don’t alienate the programmer.

This story has been altered to correct that Powers said “I don’t think Twitter is a good venue for passing judgment on things.”