In a Democratic Tunisia, Parliament Wrestles With How to Regulate the Press 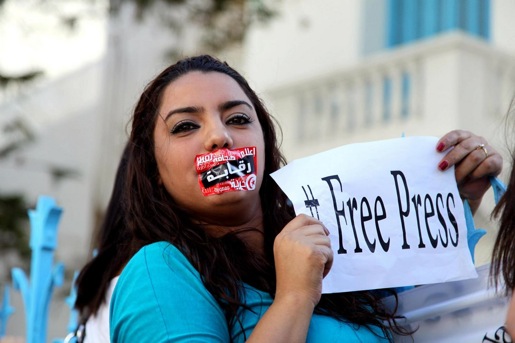 A Tunisian girl protests for a free press. Photo by Abderrahim Rezgui.

The following is an opinion piece by Tunisian freelance contributor Mourad Teyeb:

The elections of October 23, 2011, were by all means historic for Tunisia and the whole Arab region.

The debate over the best way to regulate the media and the extent of the control the state could have over the public service media has been fierce."

It was for the first time in their history that Tunisians had a democratically elected Parliament, made of a variety of political parties and views. No single political entity had a majority, but this National Constituent Assembly (NCA), which was very positively welcomed throughout the world, was something the country could be proud of.

Besides drafting a new Constitution, one of the main tasks of this Assembly is to create the principal institutions that will govern different aspects of the country’s political, social and economic life.

That includes the institution that will be in charge of media regulation.

The debate over the best way to regulate the media and the extent of the control the state could have over the public service media has been fierce.

Previously, most of the media oversight was done by the Media Reform Committee or the INRIC, which shut down last month, citing government censorship and an unwillingness to reform the sector. Generally, the INRIC was regarded as having done quite a good job.

But Tunisians were far from unanimous that INRIC’s work was perfect. Its suggested legislation for the sector was criticized by the public as well as by media professionals themselves.

Whatever the assessment of INRIC, however, it’s time to recognize that the Tunisian media has profited only very little from the freedom and opportunities offered by the January 2011 revolution. While some say allowing the NCA to establish some sort of regulatory framework for the industry will mean too much state oversight, it may be the only way to truly ensure the future of a professional, fair and free media in the country.

The NCA Is a Guarantee

A scene from inside the NCA. Photo by Abderrahim Rezgui.

The Tunisian media is still full of manipulation and bias. The minimum professional standards have still not been reached.

Journalists continue to operate without appropriate resources and training, and under very poor professional conditions.

Relying on the will and the ability of the Tunisian media to reform itself is, thus, asking too much.

In setting up the country’s media legislation and strategic orientations, referring to the National Assembly sounds quite plausible. For many Tunisians, it is the only way to save time and to guarantee this reform some credibility.

Having the Parliament debate and vote on the new laws for the broadcast and print media will help to avoid useless haranguing. It will also provide a consensus over such critical issues as media regulation.

Some say this is a path that involves too much state control over the media.

But, in my opinion, rejecting any role of the NCA in reforming and regulating the media is very dangerous because it questions the whole democratic process Tunisia has achieved.

The legitimacy and the role of the NCA is a big part of this process, and a pride to all Tunisians. Ignoring its role in setting up the legislative foundations of the country’s democracy reflects a kind of will to preserve the status quo inherited from the Ben Ali era.

In this respect, the civil society (political parties, human rights associations, and freedom of expression advocates) has a major role to play. It is supposed to hold a thorough and unbiased debate over the new legislation.

The role of the public service, respecting the journalistic ethics and defining what is and what is not “sacred,” can be at the center of this debate.

Since the late 1980s, Tunisia’s economy and society have witnessed waves of liberalization. The first elected government after the January 2011 revolution, though Islamist-lenient, preserved this liberalizing spirit in all the sectors of the economy.

Setting up any kind of restrictions to who can invest in the print or the broadcast sectors will, thus, appear contradictory with this spirit. If no conditions are today required to start a print or an online media business, the criteria set to license radios and televisions have so far been ambiguous. In the absence of clear-cut orientations and transparent laws for this sector, many who deserve it were not authorized to open their media.

Keeping an eye on respect of the ethics and moral values of the Tunisia society should be included in any new media legislation. That’s something most Tunisians, including liberals and communists, do agree about.

And giving the opportunity to anybody to invest in the media market (mainly broadcast), without any restrictions whatsoever, is also vital to Tunisia’s rising economy.

The coming broadcast legislation should encourage both local and foreign investment. It is vital to boost employment and to raise competition. For it is only through this competition that the Tunisian media can develop and improve its professionalism.

Allowing foreign investment also guarantees that no entity, political, religious or economic, has a monopoly in the sector or reigns alone over it.

The role of the body to be set up by the NCA should be limited to applying the law and making sure that everybody respects whatever ethical and moral principles will be agreed upon.

The present Tunisian government is said to have plans for a media city, to be launched somewhere near Tunis. It is a good step toward the democratization of the media sector.

Reform From the Inside

Recent experience shows that some media professionals went from being victims of the former regime’s censorship machine to another form of oppression in the shape of self-censorship or training being denied.

One of the results is that today, we often hear people saying that the media is not telling them the truth about the reality on such key issues as the country’s security, unemployment or political parties. For months now, a lot is being said about the reform of the media legislation, about the interference of the executive power in the media content and structures.

But very few are talking about basic training of journalists, about everyday violations of ethics and even the law, about the journalists’ working conditions including their wages, about the growing number of media illicitly and illegally financed by political parties and politicians, and about the ways to move from a government to a public media.

Refusing to submit to any pressure compelling them to work in a corrupt world is a first step towards reform. Rejecting any form of government interference in their job is the beginning of their war against censorship. Taking the initiative and tackling the real problems of the media are essential for keeping the media free and will enable it to get rid of old-fashioned techniques and corrupt decision-makers.

But more important than showing disagreement, even enmity, with the government or unconditional support to it, the real debate Tunisian media needs to launch today is greater self-criticism and more in-depth self-assessment.

Mourad Teyeb has been working in the media sector for 15 years, with most of his career spent with Dar Assabah, the company that publishes Le Temps (a daily French publication), Assabah (a daily publication in Arabic), several weekly papers and Assabah News, the online news outlet of the company, for which he is the deputy editor. He has also been a reporter in Tunisia for the BBC World Service since 2000.