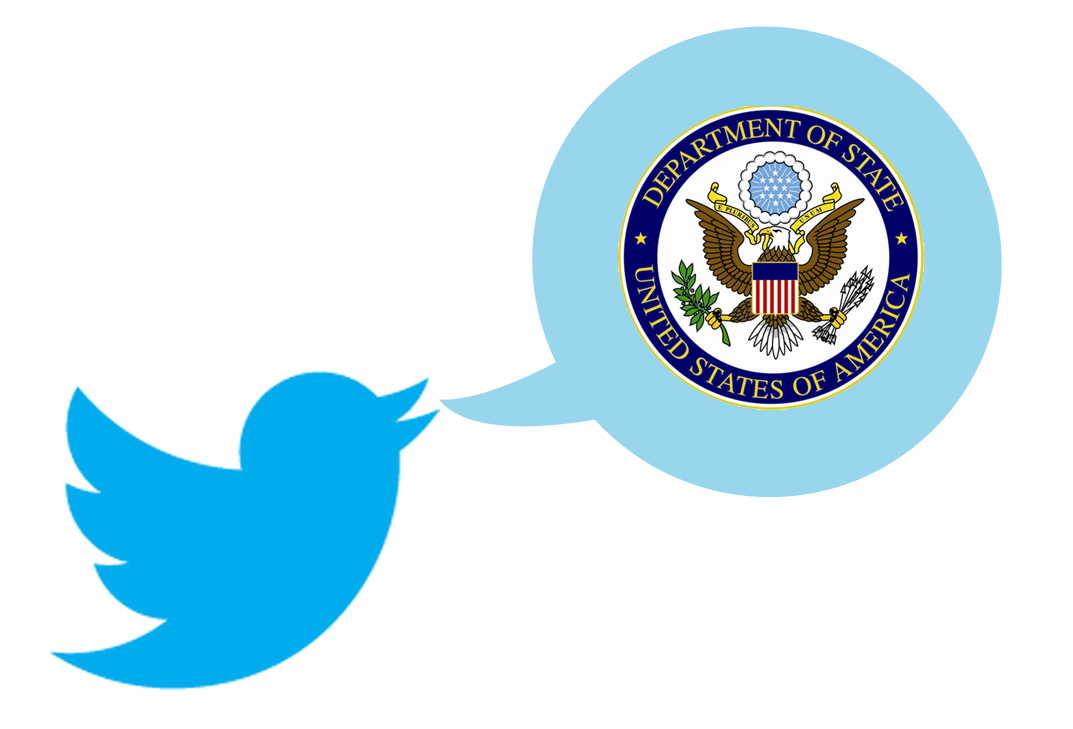 The U.S. Department of State has embraced the Twi-plomacy era with more than 26,000 tweets and nearly 380,000 followers.

Twitter is changing the face of diplomacy; in fact, it’s creating an entirely new concept in foreign relations that is changing the way publics are informed by governments. “Twi-plomacy“ is a term that many in the social media world may not yet be familiar with, but it’s becoming prevalent among government offices.

It describes an increasingly relevant phenomenon of global communication: Twitter’s growing influence over the way world leaders communicate with other governments, their own citizens, and the general public. The use of social media in diplomacy is generally referred to as “eDiplomacy.”

Traditional diplomacy is not being replaced by eDiplomacy. The two are simply merging to make foreign policy less foreign to the public."

A recent lecture titled “Is Twi-plomacy changing the face of modern diplomacy?” at the Italian embassy featured experts in foreign policy and communication including: Claudio Bisogniero, Italian ambassador to the U.S.; Alec Ross, Secretary of State Hillary Rodham Clinton’s senior adviser for Innovation; David Ignatius, associate editor and columnist at the Washington Post; Ahmed Shihab-Eldin, host and producer at HuffPostLive; and Deborah Seward, director of Strategic Communications at the UN.

title=”Alec Ross of the State Department discusses Twitter at the Twi-plomacy conference.” />

The most significant effect of eDiplomacy is that the world is witnessing a geopolitical shift in power, Bisogniero said.

Diplomats are struggling to adapt to the rise of social media, and their greatest responsibility is the need to listen more. Twi-plomacy allows diplomats to engage with the public more directly and efficiently. Bisogniero stressed that while eDiplomacy operates within the social media sphere, its true promise does not lie in these new technologies themselves, but rather in the ideas for how to improve foreign policy within them. Ross echoed the ambassador’s statement that, thanks to eDiplomacy, power is shifting from hierarchies to networks of citizens.

Ross, whose position at the State Department was created specifically to blend technology with diplomacy, said, “If Paul Revere had been a modern day citizen, he wouldn’t have ridden down Main Street. He would have tweeted.”

The State Department is known for its heavy tweeting, but Ross stated that it’s not to be trendy, but to engage the public on foreign policy discussion. Ross did concede, however, that Twi-plomacy can have negative consequences, echoing Secretary Clinton’s statement that, “Information networks are like nuclear power. They can fuel a city or destroy it.”

Ignatius and Seward cautioned against the dependence on social media over traditional media sources. Ignatius said journalists are often too busy tweeting to provide in-depth reporting on issues that actually matter.

With a background in journalism, Seward warned that social media can lack credibility. Even though Twitter and Facebook are growing as news sources, the need for accurate, fact-checked information is even more relevant now, and all media must work together.

Traditional diplomacy is not being replaced by eDiplomacy. The two are simply merging to make foreign policy less foreign to the public. These technologies have a great influence on decision-making today. Ross stressed the benefits of social media at the conference’s end, stating, “Anything that connects the governed to the governing is inherently good.”

Photo of Alec Ross by Italian Embassy on Flickr and used with Creative Commons license.

Eva is a Center for Social Media graduate fellow and is pursuing a Master’s degree in International Media at American University. After completing her B.A. in Corporate Communication with a minor in English from a small school in Texas, Eva struggled to find a program that could encompass her academic interests and professional ambitions. As a student who studied and worked abroad and engaged in international human rights projects, Eva’s interest in international affairs grew to a social responsibility during her time as a congressional intern on Capitol Hill; however, as an undergraduate who wrote for her student newspaper and advocated for social change on numerous communication committees, Eva felt that her contribution to global awareness could best be made through communication and media. Ultimately, Eva believes that education and the sharing of information can provide anyone with the tools necessary to create a more relevant and demonstrative social context.