Why I Left American Public Media to Start Groundsource 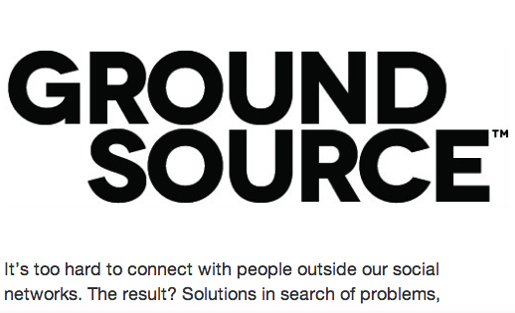 At the end of September, I left American Public Media after 13 years as a reporter and co-founder of the Public Insight Network. I have three young kids. I had a good job in an industry where good jobs are scarce and getting scarcer. I could have worked there for years and been engaged intellectually and worked with mission-driven, smart folks.

Am I crazy? Why would I leap from a perfectly good plane? In a word: empathy.

if you can port into another person's point of view, you start to see how the world looks corrupt or unfair from their perspective."

It’s the word that came to mind the other day when my brother-in-law asked: What unpopular idea would you go to bat for?

It’s not that empathy — the act of imaginatively entering into another person’s world — is unpopular. In the corporate world, “empathy” is increasingly how hard-nosed business types refer to understanding your customers and their needs. But in the journalism world I’ve traveled in for the last 15 years, the word feels somehow not hard or specific enough. It seems a little soft and fuzzy — not characteristics you’d generally associate with journalists.

And that’s why I’m leaping — to find a way to use technology to increase empathy.

I’m building Groundsource*: a mobile engagement and research platform. I’m just entering the prototype phase, and at first Groundsource will be designed to engage people at the “bottom of the pyramid” who are far less likely to be sharing information online — but own one of the 5 billion mobile phones that can be used for SMS, MMS and voice.

Before I get to the details of Groundsource, let me explain a bit more background on why empathy is so important to me.

Empathy is a fundamental quality of great journalists. Jose Antonio Vargas, the longtime journalist and famously undocumented immigrant said as much in his recent keynote speech at the Online News Association conference in San Francisco. Journalism “has given me the biggest gift that anybody could ever give me,” he said, “which is the gift of empathy. “Of seeing and listening to people who may not agree with me and who feel different than I do.”

In 2003, I helped build a kind of “empathy engine” in the Public Insight Network. I’ve since had the genuine honor to work with a band of visionary misfits and mavericks to build the tools of PIN, a database of more than 180,000 sources, a network of nearly 80 partners newsrooms, and the best practices, to bring shoe-leather journalism into the networked age. Within months of starting PIN, I had access to a daily citizens’ news wire streaming into my inbox, full of personal and often bracingly honest depictions of life as observed at ground level. I was hooked on that feed, and helped others get hooked too.

But I also became increasingly aware of a chasm between life as observed by sources we were hearing from, and the version of our world newsrooms were depicting, largely through the testimony of highly quotable experts and pundits. Life as viewed from ground level is so much more interesting, and full of drama, and ultimately — as you see patterns — more illuminating of what’s really happening and why.

Think about how we cover politics. It’s red, blue and the swing voters in the middle. The goal of overheated media coverage, it seems, is to split us into tribes, and to stoke our misunderstanding and animus to a crescendo of antipathy by election day in November.

The need for even more empathy

But what if we spent the time to genuinely understand the logic and experience of people who aren’t like us, or with whom we disagree? My former colleague Jeff Severns Guntzel produced a neat interactive exploring formative moments in the lives of conservatives in the Public Insight Network — at a time when the view from the left could be summarized as follows: What the hell could they possibly be thinking?

I love that question, and think it’s the basis for great journalism — and not just the “soft” human-interest stuff, but actual hard-hitting investigations. After all, if you can port into another person’s point of view, you start to see how the world looks corrupt or unfair from their perspective. If you’re white and middle-class like me, things usually look pretty fair and prosperous. If we view life through our own privileged lens, we’re not seeing the whole picture.

Over time, I’ve become convinced there’s a need for more empathy, and that technology can help. I’m all for social media, and have made and sustained dozens of real-world relationships thanks to Twitter, Facebook, Instagram and the rest. But what we share on those platforms is more apt to create envy than empathy. The harder or at least less enviable and shareable truths of our day-to-day life we hold close to ourselves until someone bothers to ask, has our trust, and has a good reason for needing the information.

PIN does this for newsrooms around the country, and I will remain a huge fan and will help it spread in whatever way I can. Yet as I’ve talked to journalists from other parts of the world, and met others with a similar need for a way to quickly connect with people on the ground and build empathy, I’ve realized that there is a much larger opportunity. Design researchers, individual journalists, documentarians, ethnographers and many more would benefit from a DIY engagement and research platform that would quickly and cheaply help them connect to the right people on the ground and help them gain insights they need to make things that matter — be it journalism, a new way to get clean water, or a new service that helps people feel safer in their community.

With Groundsource, I’m going to partner with an array of international groups focused on public service, social entrepreneurship. and tackling “wicked” problems like poverty, crisis response, or access to clean water or quality education. These include Ushahidi, the Broadcasting Board of Governors and Voice of America, IDEO.org, and Ashoka.

Where Ushahidi is generally used as a one-off mapping tool for big news events and crises, Groundsource will be deployed every day, to gather quotidian details of people’s lives so journalists and researchers can tap them on the shoulder and ask them to share their experience over months and years. Groundsource will also have an open data API and a heavy emphasis on mapping and filtering.

I’ll be structuring the company not as a non-profit, but as a for-profit B-Corporation, because I heartily agree with what Tim O’Reilly wrote in 2009 in his article “Make Things That Matter“: “We need to build an economy in which the important things are paid for in self-sustaining ways rather than as charities to be funded out of the goodness of our hearts.” We want to make the world better, and create long-term value. We’d like to be a redwood, not a mayfly.

Our main challenge in building Groundsource will be in balancing the incentives for each participant. On-the-ground sources will need inducements such as airtime or texting credits to motivate them, as well as confidence that the people gathering the information are trustworthy and that their information will be safe. Journalists will need to experience sourcing success using the platform early and often, and the platform will need to help them make money somehow. (I have a few ideas there which I’ll reveal later.) And researchers will need an easy, efficient way to connect with hard-to-find, high-quality people, pre-screened people and schedule interviews with them or assign them “homework.” If we get the balance right, we can scale the platform quickly while maintaining quality. It’s not impossible.

In the meantime, I’ll be following my own prescription and will be spending the next few months understanding the aspirations, pain points, and unmet needs of the people I’m designing for. That’s the whole point, after all.

Andrew Haeg is a founder of Groundsource, and formerly co-founder of the Public Insight Network at American Public Media a crowd-sourcing platform used by more than 70 newsrooms, and comprised of more than 170,000 sources. He was a 2008-2009 Knight Fellow at Stanford University, where he focused on leading change and innovation in journalism through design thinking. He was a Midwest correspondent for The Economist and a business and economics reporter at Minnesota Public Radio.