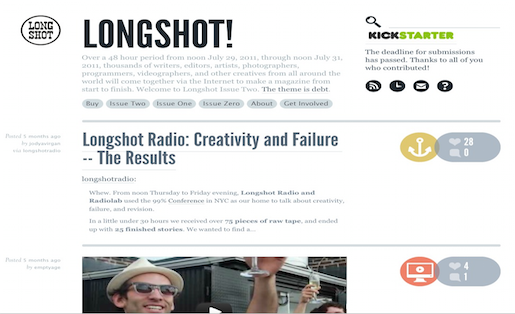 John Bracken of the Knight Foundation cites Longshot magazine (screenshot pictured here) and Kickstarter as examples of collaboration that he finds energizing.

John Bracken, director of Journalism and Media Innovation at the Knight Foundation, wants to know what I mean by “collaboration.”

We’re chatting by phone about how collaboration fits into Bracken’s vision for news innovation.

A funder can come up with an idea and get two organizations at a table and force a relationship ... but my hunch is that's going to be less effective and less fun." -John Bracken

I throw out a modest definition. “Working together,” I say. “Playing nice.” (It’s not a sophisticated characterization, to be sure, but it’ll do.)

He’s right to make sure we’re working with a common understanding of the term, since, as he observes, “Collaboration means different things to different people.” (Carrie Lozano wrote about that very issue here on MediaShift earlier this year.) Bracken notes, for example, that for some news orgs, linking to each other constitutes collaboration; for others, collaboration means a complete merging of operations.

Bracken is wary of what he calls “collaboration with a capital C.”

“A funder can come up with an idea and get two organizations at a table and force a relationship, or strongly encourage a coordination of activities,” he says — this is capital C collaboration, in his book — but “my hunch is that’s going to be less effective and less fun for all involved than if two people who are doing the work have a cup of coffee,” or develop an idea together over Twitter or IM. Those people, by the way, tend to be “in the middle” of an organization, in his experience — not at the executive level (or at the most junior level).

“The ethos that comes from the open web is about collaboration,” Bracken notes, observing that more often than not, “when you introduce people from the world of the Internet to each other, lightbulbs go off.” He says “Internet people” are usually “not looking to control the outcome” of a joint project, which allows them to work together more effectively. Savvy organizations are able to build on the naturally collaborative nature of Internet culture to foster informal, network-driven collaborations.

“What we’re seeing in our work is the power of the network,” Bracken says.

does collaboration want to be free?

“It’s not a coincidence,” he continues, “that the two major investments we’ve made this year have been ProPublica and NPR, and major components of those grants are opening up the work they’re doing to people outside (each organization’s) walls.” (This reminds me of the saying, information wants to be free — maybe collaboration wants to be free, too?)

ProPublica’s reach is pretty limited on its own, Bracken observes; the same is true for California Watch, a collaborative reporting project funded by the Center for Investigative Reporting. Both organizations use partnerships to push their work out “robustly” to a broader network than they could reach on their own. ProPublica also invites anyone to republish its content via a Creative Commons license. (California Watch allows full online reprints by non-profits only.)

Other examples of news collaborations that energize Bracken? DocumentCloud (which, incidentally, received Knight funding) and Longshot, a magazine that’s produced in 48 hours. (There have been three issues to date.) He also cites Kickstarter, where, of course, you “can’t do anything without the help of others.”

For Bracken, agility is also key to a collaboration’s success. News organizations need to respond at “Internet speed,” he observes — as do we all, Knight included, which is why the foundation recently launched the Knight Prototype Fund, which encourages nimble development of new-media ideas.

“The tools we use today are very different than the tools and platforms and approaches we’ll be using in three or six months,” Bracken says. “Being responsive means a different way of working,” one that requires more agility — and openness. Organizations need to find “points of trust” that allow them to work together.

He acknowledges this can be easier said that done. In an email he sends me shortly after we speak, he writes, “Collaborations between foundations are often talked about, but in my experience difficult to pull off.”

What other funders would you like to hear from regarding how collaboration fits into their vision of the work they support? Let me know in the comments.