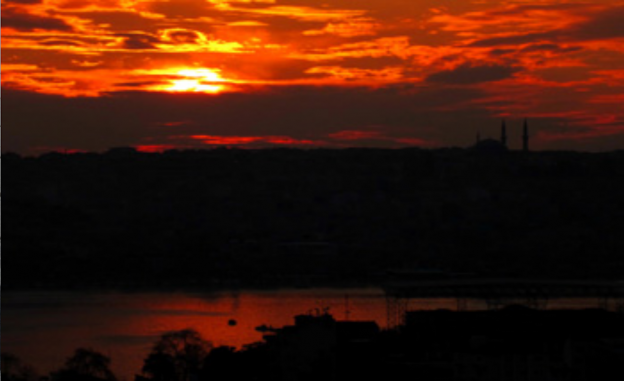 Sunset over the Tarlabaşı neighborhood in Istanbul. All photos by Kat Russell.

Who knew that an email could change my life? I certainly wasn’t expecting that when I opened the mass email sent out by my adviser. But there it was: The Istanbul Project.

If the “powers that be” saw fit, I was to study international reporting and foreign correspondence in Istanbul for four weeks with ieiMedia — an intensive journalism study abroad program.

My experiences in Istanbul go way beyond studying abroad. The lessons I learned surpassed those taught in classrooms. Istanbul opened my eyes and my heart."

The question was, could I do it? I am a single mom and a full-time student at California State University Northridge, and juggling all of that is difficult enough without being in another country. More importantly, I’m not exactly sitting on piles of excess money.

And so, the deliberation process began — could I reconcile being away from my son for four weeks? Was it worth the future financial strain that would result from my going? Did the benefits of going outweigh the cons? In the end, I decided they did and my journey began.

The months before my departure were filled with a never-ending list of preparations. Countless emails were sent back and forth between the program directors, my soon-to-be classmates and myself.

I spent long nights poring over my computer screen, researching possible grants and scholarship programs. I had applications to fill out, essays to write, letters of recommendation to acquire, and transcripts to get in order and mailed out. This didn’t even include the things I needed to do to finalize my trip, get my flights in order, and make sure my son was prepared for my absence.

About a month before my departure, I received fantastic news. My hard work researching and applying for grants and scholarships had paid off. I was awarded a $5,000 scholarship from the Benjamin A. Gilman International Scholarship Program to pay for the cost of my study abroad experience.

With all my ducks in a row, Istanbul became tangible. A new experience beckoned. Excitement, fear, anticipation and anxiety all made their appearances. It was happening — I was going to Istanbul.

After three flights and 48 hours, I finally arrived in Istanbul, exhausted but excited. My first couple days were all about getting acclimated — getting to know the sights, the sounds and the smells and, of course, adjusting to the 10-hour time difference.

I was fortunate to have planned to arrive three days before The Istanbul Project began. This gave me time to see a lot of the major tourist sights and to meet up with some of my classmates who also had arrived early.

Four days into my trip, it was time to move into the dorms and to meet the rest of my classmates. There were 14 of us in total, all female, ranging in ages from 19 to 33, and I was the oldest of the bunch.

A few blocks away was Bahçeşehir Üniversitesi, where our classes were held, and just beyond the school was the Bosphorus — the strait that divides Istanbul and Turkey — between Europe and Asia. I spent many a night sitting on the docks along the Bosphorus, drinking tea with friends and playing Backgammon.

We had a couple of days to settle into our rooms and familiarize ourselves with our new neighborhood, and then our classes began. Our days started at 9 a.m. with Turkish classes, followed by international reporting classes, and ending at 3 p.m. after our multimedia classes.

Since our program was only four weeks long, we were immediately thrown into working on our story ideas. At the end of our first day of classes, we were introduced to our interpreters and sent out to find interview subjects for our first stories.

I have to say I was not prepared for this. I had come to Turkey with story ideas, but I was not expecting to go out and report on my first day. I had assumed I would receive lessons and instruction before the actual reporting began. But, that afternoon, my interpreter, Bürde, and I set out in search of people to interview.

The Istanbul Project was a new program, and this was its first year. ieiMedia has been doing study abroad programs in Italy and France for several years, but Istanbul was a new endeavor and, although I ultimately learned a lot, the newness of the program was obvious and felt by the students and some of the instructors. Luckily for me, this was not my first experience studying in a foreign country, so I adapted quickly, but a handful of students struggled with the apparent lackadaisical and disorganized structure.

One of the drawbacks to being the first students in a budding program is that you are essentially a guinea pig and you have to be able to roll with the punches and take it day by day. However, in journalism, you kind if have to learn to take things as they come anyway, which is something I have become rather comfortable with.

In order to complete the class, we were required to put together two projects — one was a written profile piece, which was to include photos of the person, and the other was a multimedia feature piece.

I had come to Turkey with some ideas of what I wanted to do, but as the program progressed, I was forced to rethink my ideas and adapt to time limitations.

For my profile piece, I chose a man named Ferat Şahin, the director of a non-profit called Children of Hope Association (CHA), which works to help kids get off the streets. Şahin was homeless for 14 years — starting at the age of seven when he ran away from a troubled home and made his way to Istanbul. Şahin remained on the streets for 10 years. When he was 17, he got involved with CHA and his life began to change. Today, he is the director of CHA — the same program that saved him. He is married and a father.

I couldn’t have chosen a better subject to profile. Şahin was friendly, charismatic, and, most importantly, he was open. He made my job easy.

The second assignment, the multimedia piece, was not as easy. The time constraint was my biggest obstacle. I quickly realized that the ideas I had come up with were not feasible in the time I had to get the assignment done. I switched topics several times until I found a subject that would work — her name was Janset Karavin, and she was a pantomime performer.

This was the first time I had ever shot video — I’m a photographer through and through. Luckily, I had a lot of help and solid instruction from Brent Foster, our multimedia professor and former video journalist. Brent worked with me tirelessly — he talked to me about filing, managing my audio, framing my shots, and collecting B-roll. After three days of shooting, Brent sat with me in the computer lab and showed me how to edit. In the end, I had produced a piece which I felt extremely proud of.

There were many things that I learned while I was a student with The Istanbul Project. This was the first time I had reported in a foreign country, the first time I had worked with an interpreter, and the first I had done any sort of multimedia work. By the end of the program, I had become more confident in my abilities as a journalist and was pleasantly surprised that I have a knack for video work.

Despite the fact that the program did have some rough patches which needed to be ironed out, my study abroad experience was deeply rewarding.

My experiences in Istanbul go way beyond studying abroad. The lessons I learned surpassed those taught in classrooms. Istanbul opened my eyes and my heart. I had never been exposed to a predominantly Muslim culture, and coming from a country where there are some extreme opinions regarding Islamic cultures, what I found in Istanbul was not at all what I expected.

What I found was a place that is rich in history and culture, full of quirkiness, and brimming with life. I learned about a culture and a faith, which resulted in all my preconceived conceptions being smashed. My time in Istanbul also helped me define what it is I really want to do with my future and where I want to be while doing it. Most of all, I found a place I could call home — where I could see myself living in the years to come. I have since returned to Istanbul two more times — each time deepening my love for the city and confirming for me that Istanbul is where I want to be.

Kat Russell is a graduating senior, studying journalism at California State University, Northridge. She is currently working as the multimedia director for the Daily Sundial, the award winning campus newspaper. In January 2012, Kat won a Hearst Journalism Award, for her multimedia feature piece on a pantomime performer in Istanbul. She has also interned with KPCC, in Pasadena, and Cornucopia Magazine in Istanbul, Turkey. Kat has traveled and photographed all over the world.