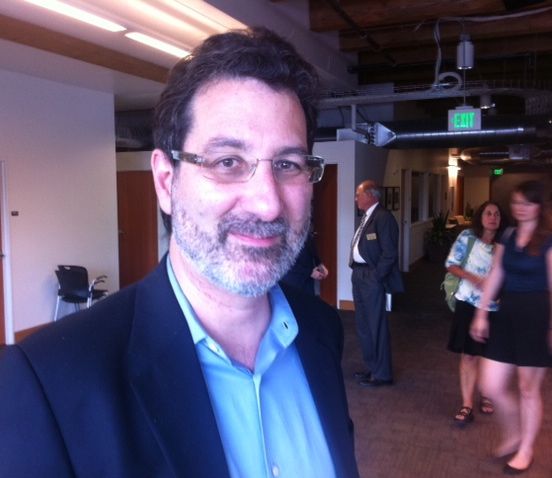 Engelberg had never done any fundraising before becoming second-in-command at ProPublica, the high-profile, non-profit, investigative news organization set up in 2007. He didn’t have to right away; for the first three years, ProPublica received $10 million a year from a foundation set up by Herb and Marion Sandler with their earnings from the savings and loan industry. ProPublica’s budget has remained the same, but the Sandler Foundation share fell to half last year. As Engelberg prepares to lead the first online-only news organization to win a Pulitzer Prize, he has a lot on his mind: money, branding, donors’ expectations, and making an impact.

You want a certain level of editorial independence, and [donors] want a deliverable. That's a clear tension." -Stephen Engelberg

Money: A little from many or a lot from a few?

Most donations to ProPublica come as large sums from a few places. “We’re not like NPR,” Engelberg told the group gathered at the Turnbull Center, noting ProPublica doesn’t have the infrastructure to “bludgeon” people during around-the-clock fund drives. But he’d like to increase the proportion of small donations from many people.

Building that broad base is a challenge. Although disclosing salaries (as non-profits are required to) was a new practice to him — the current editor-in-chief earned more than half a million dollars in 2010 — Engelberg thinks that doesn’t undermine asking people earning less for contributions.

“You live in a 501©3 world, you’re going to be publishing all kinds of information that would not normally be public,” he said. “That said, a number of us are now doing it, and it doesn’t seem to have terrifically harmed our ability to raise money. People obviously look at what we publish, and they draw their own conclusions.”

A bigger risk is big donors. Engelberg told of one person who had given a “large” sum of money, but was so angry with a ProPublica report on how California’s Democrats got around new, non-partisan redistricting rules that he emailed saying he was going to take the money back. Eventually, he changed his mind. Engelberg suggested a broader base of donors would change the game.

Branding and other challenges of collaboration

“When no one had heard of ProPublica, it was useful to work with established organizations,” Engelberg said. “We’d give them free content, and partner on virtually any level.”

But after the organization won its first Pulitzer, Engelberg said his board of directors wondered why the winning story hadn’t been more prominently branded ProPublica when it appeared in the New York Times Magazine.

He also acknowledged that working closely with other news organizations can be difficult, especially if the essence of a story is at stake. He characterized ProPublica’s stance this way: “We always said that if the editing process really got out of control, we would take our marbles and go home.”

Apparently, that’s not happened yet, bu has come close to happening a few times. In response to disagreements during joint editing, Engelberg said he has tried to learn what other media outlets need to tell the story their way.

“If you’re going to work with CNN, it’s going to be a CNN story,” he told the group of journalists. “I try to say to myself, OK, when is this ‘we’re trying to fit the organizations needs and it’s OK’ and when is it frankly not OK?”

“I love this word,” Engelberg said. “‘Deliverables.’ What are you going to do for me?” He said he learned that foundation basic after he entered the non-profit world. And he said that just doesn’t work for journalism. “You want a certain level of editorial independence, and they want a deliverable. That’s a clear tension.”

Transparency is one answer. “I think you have to be very, very, very transparent,” Engelberg said. As an example, he mentioned adding a footnote to a story ProPublica co-published with PBS Frontline and Berkeley’s Investigative Reporting Program (IRP) about a federal investigation into a business run by Sheldon Adelson, a major Republican donor who supports a one-state solution to the Israel-Palestinian conflict. Some IRP support comes from a foundation that supports a two-state solution. The footnote doesn’t offer that level of transparency, however; it only mentions the foundation name.

Another challenge in non-profit culture, Engelberg has found, is the amount of time foundations traditionally keep supporting any given organization. As experienced non-profits know, many funders push projects they help start to become self-sustaining within a few years. Engelberg predicts that financial model is “probably not” going to work in investigative journalism because the costs of creation are higher than what people are willing to pay for the product.

So will foundations financially support editorial independence, and will they do it for years? Engelberg thinks so.

“When you have donor-driven journalism, we’re not fooling anybody,” he said. “I believe that over time we can persuade people in the world of philanthropy that maybe this animal is a little bit different.”

Many people ask where ProPublica gets story ideas, Engelberg said, but a more crucial question for the organization is where to place them. He wanted a 2011 story about racial discrimination in presidential pardons to be published in the Washington Post, where the U.S. Attorney General and the White House would see it.

The story did appear in the Post. It did not trigger the immediate outcry Engelberg had expected, but recently President Obama requested a review of the pardons process.

In 2008, Engelberg cold-called the editor of the Albany Times-Union to offer a free piece investigating safety claims of the hydraulic fracturing (fracking) industry because ProPublica knew New York was considering permitting fracking near the watershed that supplies New York City’s taps. The piece ran one July morning shortly before a decision was due. The governor nixed drilling that afternoon. “Sometimes you can get impact by reaching a lot of people,” Engelberg said. “Sometimes you get impact by reaching the right people.”

But to reach anyone, news organizations need to bring in revenue. Engelberg senses that the premium investors place on high site traffic and hits is shifting to include an understanding that news organizations need loyalty to survive. And to earn loyalty, he said, journalists must give people a reason to pay attention to their work. “There has to be something at the core that’s different from what you could get anywhere else.”

A version of this article originally appeared on the Journalism Accelerator.