4 Tech, Social Innovations at the RNC — And One Clever Tweet 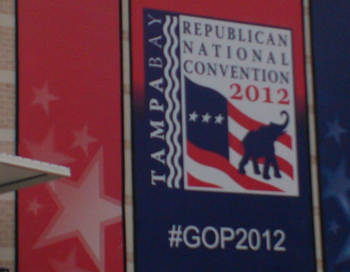 Guests in Tampa were immediately greeted by a gigantic sign that boldly stated the official hashtag: #GOP2012.
Bomb-sniffing dogs, Secret Service agents, and a tropical storm made it hard for people to connect with each other. But social media probably made people feel more connected than ever."
Click to read our whole series
ADVERTISEMENT

TAMPA, Fla. — For those who haven’t experienced it, a national political convention in America is something like a post-apocalyptic police state crossed with the Super Bowl and an Academy Awards red carpet.

Here at the site of this year’s Republican National Convention, bomb-sniffing dogs, Secret Service agents, and a tropical storm all made it hard for people to connect with each other. But social media probably made people feel more connected than ever. Twitter confirmed that more than 4 million tweets were sent during the GOP event — a one-day record for political conventions.

But we’re somewhat past the era during which merely using a social media platform is considered interesting. Whether it be Twitter, Facebook, Tumblr, Foursquare or any number of other platforms or apps, people are using them. Republicans, Democrats, and Independents can agree that they like social media.

Guests in Tampa were immediately greeted by a gigantic sign that boldly stated the official hashtag: #GOP2012. Times have changed since the John McCain/Sarah Palin campaign of 2008.

The convention officials themselves were using social media: conducting interviews with media via Skype, monitoring the hashtag. But this is what we have come to expect. It’s not particularly interesting.

(Note: Skype is now owned by Microsoft, my employer.)

Innovation in the shadows

Here’s what I did notice was standing out a bit at the GOP’s big event: collaborations between some unlikely bedfellows, overtly or presumably serving to show both partners in different lights. This took place in what one might call the “shadow convention,” the space outside the official proceedings with delegates and votes and state delegation breakfast meetings, where a melange of media and tech companies hold policy briefings, interact with convention VIPs, and underwrite after-hours parties. The shadow convention with its corporate stalwarts got fairly innovative in comparison to the convention proper.

Here’s a rundown of some innovations I saw:

1. CNN had a “CNN Grill” at the convention, as they typically do at large events like the conventions or SXSW. It serves as a combination working space for staff and full-service restaurant. Because you need a special pass to even get into the CNN Grill for one day, it’s a popular place to hang out. But CNN was also using social technology in the midst of all the hamburgers and beer. Deploying Skype, they created what they call Delegate Cam, and enabled people following from home to be able to talk to their delegate representative casting their vote inside the security perimeter.

2. Time partnered up with social location service and fellow New York-based company Foursquare on an interactive map that helped conventioneers find each other. I asked Time about why they thought this was an interesting experiment to deploy in Tampa. Time.com managing editor Catherine Sharick told me, “Time partnered with FourSquare for the political conventions in order to help solve a common problem: Where are people and what is happening?” Writing elsewhere, I gave it a “B” for usefulness (if I know where Time writer Mark Halpirin is, what exactly should I do with that information?), but an “A” for creativity.

3. Mobile short video service Tout collaborated with the Wall Street Journal to launch WSJ Worldstream, an effort by more than 2,000 global reporters who post vetted real-time videos from a special Tout iPhone app. The new video channel was launched in conjunction with the RNC. Reporters posted video interviews with delegates, protesters, and so on. Some of the videos will also be incorporated within longer online written pieces.

4. Microsoft (my employer), for its part, allowed me to use Pinterest to post real-time photos of the behind-the-scenes efforts of my colleagues. That included powering the IT infrastructure of the convention, conducting cyber-security monitoring, running Skype Studios for media and VIPs to conduct HD video interviews, and live-streaming the event on Xbox Live. Interestingly, Pinterest as far as I can tell, was not a popular medium during the GOP convention. I’m not sure if that’s significant, but I couldn’t easily find many pins from the convention.

Toward the end of the convention, social media watchers knew that the Republicans had a success by the numbers — millions of tweets and countless uses of the hashtags, photos uploaded, YouTube views of individual speeches, etc. But that’s expected now. One thing that was missing? A truly creative use of social media that involved more wittiness than brute force.

There were a couple of clever uses of social media by a prominent politician during the Republican convention. That politician just happens to be a Democrat by the name of Barack Obama.

The most popular tweet during the Republican National Convention wasn’t tweeted by a Republican. In a reference to the now-infamous Clint Eastwood “talking to an empty chair” speech, Obama’s account tweeted three simple words: “This chair’s taken.” It was retweeted more than 50,000 times and favorited more than 20,000 times. More importantly, it’s smart, it’s art, and it’s memorable.

Obama also hopped on the somewhat-edgy, somewhat-underground “front page of the Internet” Reddit to do something Redditors (as they’re dubbed) call “Ask Me Anything.” In a half-hour chat, the president took on all comers in a broad Q&A.

Heading into the Democratic National Convention in Charlotte, N.C., I’m curious to see how it compares. I’ll be Pinteresting, CNN will be Skyping while they’re grilling, and the WSJ will be posting short videos. What’ll be the surprise there, if anything?

Mark Drapeau is the the director of innovative engagement for Microsoft’s public and civic sector business headquartered in D.C. He tweets @cheeky_geeky.

One response to “4 Tech, Social Innovations at the RNC — And One Clever Tweet”