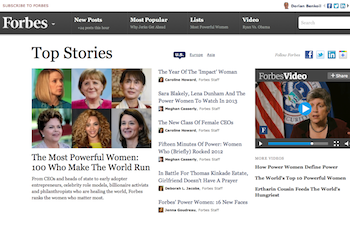 Forbes has been remaking itself into a multi-platform brand whose work is easy to share throughout social media.

This column is another in my series on new business models for news. An update and correction to this story appear below.

Amid its larger company struggles, Forbes has been trying to change, adapt and adjust to what Chief Product Officer Lewis D’Vorkin calls “wrenching transitions in the news business.”

To build a sustainable model for journalism in the digital era, new ways need to be found to produce even better journalism more efficiently." -Lewis D'Vorkin

Online, the 95-year-old business magazine has shaken up its editorial model, revamped its technology, introduced new types of advertising, and challenged conventional wisdom in the magazine publishing world.

“The economics of journalism have changed — forever,” D’Vorkin wrote in an email to me. “Marketers will not pay for digital ads what they pay for print ads. To build a sustainable model for journalism in the digital era, new ways need to be found to produce even better journalism more efficiently.”

At face value, Forbes’ efforts are encouraging. Digital revenues are up 26 percent in the first half of 2012 compared with 2011, a spokesperson told me. Magazine ad pages have increased, too, according to the Publishers Information Bureau. And Forbes Digital had its best trafficked month ever in July, D’Vorkin told me on the phone.

While it’s hard to say whether it all adds up to financial success — Forbes closely guards its numbers (more on that below) — there are lessons for entrepreneurial media managers from Forbes’ efforts.

1. Be a multi-platform brand

Digital and traditional media should be seen as a conjoined whole, not separate entities with separate goals.

“The magazine helps the web. Content all over social media helps our print product,” D’Vorkin said. “People are very much aware of Forbes content in a multi-platform world.”

D’Vorkin has frequently written and spoken of efforts to make Forbes available on every screen, with the least friction possible. That certainly makes sense for Forbes’ core community of well-to-do investors with access to multiple devices.

Staff, too, contributes to all sides, with some editors and writers contributing to both the magazine and the web. Neither print nor web is first in the pecking order. Instead, material is produced appropriate to the medium it’s in.

Forbes’ rise in traffic seems to track with the increase in its number of posts. D’Vorkin wrote last October that Forbes had 250-300 posts per day and had gone to about 23 million monthly unique visits, up from 15 million in early 2010. That grew to about 400-500 posts per day and 30 million uniques by last February.

Since then, the growth has slowed to about 450 posts per day and about 31.5 million unique visits last month, D’Vorkin said, quoting internal figures as measured by web analytics from Omniture. (Figures from comScore, which uses a different tracking methodology, show that Forbes Digital got nearly 13 million unique monthly visits in July, up from 12.1 million the previous July.)

The finding is not surprising. My analysis of a number of publications has found that traffic tends to rise in proportion to the amount of content published.

3. Focus on quality, too

“We’re always about producing quality content. That’s the thing I pay most attention to,” D’Vorkin told me when I asked about the slowdown in growth. “If it drives 31 million uniques now, and 35 million in another couple of months, I’ll be a very happy person.”

Quality page views that truly engage users are better than “tricks” such as generating more page views by posting scads of photo galleries that generate click after click, he has written.

Forbes has nearly 1,000 “topic experts” contributing from various areas of expertise. All are vetted by editorial staff to make sure they are reliable and accurate, D’Vorkin said.

“I believe in the world we live in today, the consumer of media is interested in knowledgeable content [while being] transparent in where that person is coming from, what their credentials are,” he said.

Long gone are the days of the traditional editorial flow in which a reporter files copy which is handed off to a series of editors, layout artists and fact-checkers.

Forbes’ content management system lets the same person produce and publish a story, then go in later to update or correct it. “The audience doesn’t want to be protected, they can protect themselves,” D’Vorkin told a media management seminar in New York in June.

While that can be risky, and Forbes has been called out on occasion for mistakes, D’Vorkin believes in letting contributors also be responsible for managing their communities and curating discussions their pieces generate in social media and elsewhere.

D’Vorkin also breaks ranks with most traditional publishers by letting contributors use their content elsewhere after it’s been published on Forbes’ website.

“I don’t believe in exclusivity. Ubiquity is the new exclusivity,” he told me at the seminar. Writers “can do whatever they want with it,” after they’ve published a piece on Forbes. “We win the game with SEO, anyway,” he said.

5. Reward visits rather than page views

D’Vorkin likes to say that Forbes collects, distributes, presents and pays for content differently than the old ways.

Non-staff contributors who are paid — some are not — get compensated according to the number of unique visitors their pages generate, rather than page views.

“You can game the page view system more easily,” D’Vorkin told me.

Forbes rewards repeat visits even more handsomely — 10 times more for ones in the same month, according to one report.

The more repeat visitors there are, the easier it is to grow. An analogy I make is of trying to fill a bathtub: If you can keep water from leaking out the bottom, the level of water rises much more quickly on top.

6. Be transparent, up to a point

D’Vorkin has written dozens of blog posts in which he writes about Forbes’ strategy, staffing, technology and metrics, and he can be surprisingly revealing. In one post, he acknowledged that Forbes.com splits pages in order to show more ads — a relatively common practice but one that’s seldom so publicly acknowledged.

On each page, Forbes.com also plainly displays the number of times that page has been viewed, and ranks top pages by every contributor.

Unlike CNN Money, the online home of Fortune, Forbes has not put tags on its site that allow anyone to see Quantcast’s measures of audience.

Quantcast, which competes with comScore, estimates that 5.6 million people visited Forbes.com last month, up from 5.5 million the previous July.

Financial figures are also closely guarded at Forbes, a private company. D’Vorkin told me he knows how much money digital earns vs. print but didn’t share those numbers.

He won’t say how much contributors earn but quipped that for some “it’s more than lunch money.”

7. Let marketers have an editorial voice

D’Vorkin, a veteran of local newspapers, the New York Times and AOL, has imported an advertising idea developed at True/Slant, a competitor to the HuffingtonPost he launched that Forbes purchased in 2010, bringing D’Vorkin and some of his staff on board.

Marketers can buy not only traditional advertisements on Forbes’ sites, but also pay to have their own written pieces handled through the editorial content management system, given similar display and treatment as editorial posts — from indexing, to search engine optimization to remaining in archives long after the client’s campaign is over. The pieces are labeled as advertisers’ content.

Display ads are still the “backbone of the business,” D’Vorkin has said while adding that the marketers’ pieces, published under the rubric “AdVoice,” are gaining.

D’Vorkin situates editorial, technical, measurement and sales teams together, giving them similar tools and responsibilities, and helping them work toward similar goals with the same tools and information. (As I’ve noted to the dismay of some, I tend to agree.)

Forbes organizes its newsroom around a concept of centrally sharing information and technology across departments.

9. Push technology and sharing to the forefront

Early in his tenure, D’Vorkin launched a new blogging platform imported from True/Slant while more heavily weighting Forbes’ staff toward engineers and coders.

More recently he has written proudly of the ways in which the company constantly upgrades its technology to give content creators and editors as much power as possible.

Forbes has also developed in HTML5, the latest version of the web coding language, which allows flexible (or “responsive”) designs that optimize for mobile, table and computer screens. Forbes has not jumped fully onto the iPad app bandwagon, though it does have a specialized app for its well-known lists.

And it has made sharing of its content increasingly easy. Facebook, LinkedIn, Twitter, Reddit and StumbleUpon all have have jumped into the top 10 referral sources of traffic, while portals have plunged in importance, D’Vorkin and the spokesperson said.

The question for Forbes, though, is whether even tens of millions of visitors consuming a wealth of business content along with a reinvigorated print magazine are enough to keep the company afloat. Some critics, including former Forbes editor Stewart Pinkerton, author of “The Fall of the House of Forbes,” have said D’Vorkin is accelerating the company’s demise.

Forbes’ parent company has gone through years of turmoil with multiple changes in top management, sold a stake to investment firm Elevation Partners, has had rounds of layoffs, and, according to one report, carried significant debt amid restructuring to try to right the company after it technically defaulted on a loan. Forbes sold Investopedia for approximately $42 million in cash in August of 2010.

UPDATE (Aug. 28): After initial publication of this story a different Forbes spokesperson made the case that actions taken in the past two years, during which D’Vorkin and new CEO Mike Perlis came on board, appear to be turning the company around.

Forbes Media LLC, the parent company, had its best financial performance the first half of this year in the past four years and its lowest level of debt, she said, adding that Forbes had recently refinanced its debt, which was now at “an appropriate level.”

CORRECTION (Aug. 28): A previous version of this story said Forbes sold off its headquarters “and other high profile assets.” Forbes family members, not the company, sold the headquarters and other non-operating assets “as part of normal estate planning,” a spokesperson said.