London 2012: The Thrills (and Agony) of the Social Olympics 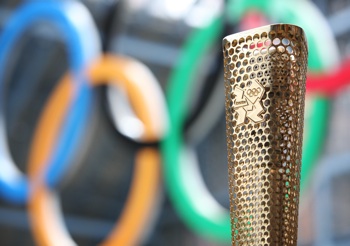 Photo courtesy of London 2012.
"I wish we had had that opportunity to connect directly with fans back then [when I was in the Olympics], but I also know it was probably good to be able to stay focused on the competition and limit any distractions." -Shannon Miller
Click to read our whole series
ADVERTISEMENT

It’s an Olympic achievement. Not just the London Games, but the social media infrastructure behind them.

People definitely engaged online during the 2010 Winter Games in Vancouver. But new apps, better mobile devices, and an Olympic policy encouraging athletes to use social media mean that fans will have more access and interaction with Olympians than ever before.

The Way We Watch

NBC’s TV coverage is usually delayed several hours so segments of the most popular events appear during prime time. This year, however, the network is offering streaming video of events as they happen. The network also made noteworthy partnerships with Facebook and Twitter. Its news division and local stations also cut a deal with Storify to help curate the flood of social content from the Games.

“The 2012 Olympic Games will be more social than ever,” Vivian Schiller, NBC News’ Chief Digital Officer, said in a press release.

The 2012 Games are also a showcase for “social TV.” People can follow the buzz online to decide what to watch after work, then log on and share that experience as they watch.

Syracuse University social media professor Dr. William Ward notes that the opening ceremonies, for example, attract all kinds of people — including those not normally interested in athletics. “That has the potential to create a lot of engagement among fans, and non-fans who are just curious,” he said in an interview.

We’ve all been inspired by televised profiles of athletes whose rippling muscles and dramatic wins are scored with rousing music that seems to elevate them to super-human status. Now we can now see them as human beings — warts and all.

And that brings a new set of issues.

The IOC even developed guidelines to deal with social media. The guidelines encourage athletes to use first-person accounts, similar to diary entries, that abide by the Olympic spirit. They forbid, however, video or images of the competitions, and comments about competitors.

And already, the need for such guidelines has been underscored.

The many firsts of the 2012 Games include the first athlete to be kicked out of the Games because of a tweet. The Greek team expelled triple jumper Voula Papachristou for a tweet that she said was a joke, but was criticized as racist.

Some wonder whether the added element of carrying your country’s pride in your pocket could add unnecessary pressure or distraction.

Shannon Miller, America’s most decorated gymnast, had never used a computer before 1996 (the year she won two gold medals), but now stays in touch with fans through Facebook and Twitter. Miller, who will provide analysis this year for Yahoo Sports sees both sides. “I wish we had had that opportunity to connect directly with fans back then, but I also know it was probably good to be able to stay focused on the competition and limit any distractions,” she said via email. “At least I get to connect now.”

And while Miller sees the danger of reacting rashly in an unguarded moment, she notes that such danger isn’t restricted to social media. “There is that same possibility in an interview as well. We all have off-days or times when things don’t come out quite as we intended or your auto-correct doesn’t quite get it correct.”

Challenges and Potential of Social Media

Ward also sees both the potential and pitfalls of social media for Olympians.

“A lot of these athletes are younger people who may not be savvy on branding and marketing; they’re there for the first time and away from their home and family,” he said. “That could be a problem if they use social media in a way that is not appropriate.”

But there is also unprecedented opportunity for fans to engage with their heroes like never before.

“The benefits outweigh all of that in terms of sharing all these firsthand accounts and perspectives,” he said.

Social media is also an important tool for Olympic hopefuls with an eye on the future. Athlete Andia Winslow, who hopes to qualify for the U.S. skeleton team in the 2014 Winter Games, says a video of her first day starting from the top of the bobsled track attracted both awareness and critical financial support.

“The mobility and ease of instantaneous crowdsourcing and crowdfunding is especially exciting as many athletes and smaller federations remain nationally unfunded,” Winslow wrote in an email interview. “During the season, athletes train full-time and for those of us living in the Olympic Training Centers, it is often difficult to secure flexible employment. Without [that] support, I would not be able to train as I do!”

As the 2012 Games begin, athletes will share with their fans, and probably prove themselves to be imperfect once or twice. Coaches will read what competitors post to gain an advantage. The media is forging onto new screens well outside the living room. Glory will be shared, and secrets will be spilled. Just as many businesses have realized that ignoring or banning social media just doesn’t work. The Olympics — and the media outlets covering it — are leaping off the high dive and plunging into risky, revealing, and hopefully rewarding new territory.