In the Face of Censorship, #SudanRevolts Goes Social 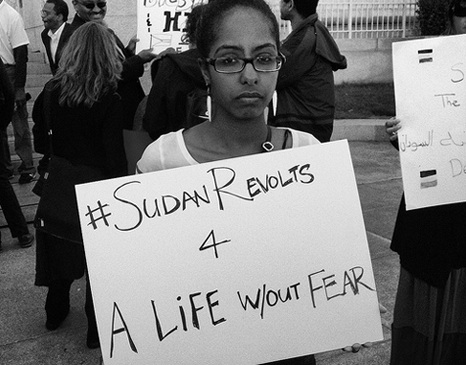 The Twitter hashtag #SudanRevolts has sparked activism online and off, internationally and within Sudanese locales. This photo of a #SudanRevolts protest at San Francisco City Hall is by "Steve Rhodes on Flickr":http://www.flickr.com/photos/ari/7517385370/ and used with Creative Commons License.

Serious North Africa news junkies are likely aware of growing demands for regime change in Sudan. Protests have spread outward from Khartoum, the capital, over the past few weeks. Hundreds of protesters have been arrested, detained, and beaten.

If you’re unaware, perhaps it’s because you’ve been busy following elections in Egypt and Libya. Or maybe it’s war in Syria that’s captured your attention. Or it could be you’re reading official Sudanese government sources, none of which have acknowledged the protests.

Since the beginning of #SudanRevolts, the amount of local Sudanese Twitter users has skyrocketed. " -activist Rawa Sadiq (not her real name)

But news about the anti-government protests has been gaining ground via social media, including Twitter, Facebook, and blogs. Much of it is being reported by activists. They claim that these channels offer a safer way — and are presently the only way — for them to ensure that news of the ongoing struggle circulates.

Protests in the northeast African country gathered momentum on June 16 after the Sudanese police raided female dorms of the University of Khartoum. The hashtag #SudanRevolts circulated rapidly, allowing netizens to actively publicize events in real time. The official Sudanese media, meanwhile, has been stifled.

“Social media plays a big role [in the protests] as it is the sole outlet for portraying the real Sudanese revolution,” Khartoum-based activist Huwayda Malik* said in an email exchange with EJC Magazine.

Because she was detained by security forces at the end of June and interrogated for hours prior to her eventual release, Malik prefers to be quoted under a pseudonym.

She added: “Mainstream Sudanese media is ignoring every aspect of the revolution,” which began in response to the government’s announcement of a new austerity plan before growing into a general anti-regime revolt.

National TV and radio coverage of the revolt is close to nonexistent. Pre-publication censorship has been reimposed by the Sudanese authorities, said Nuha Sameer*, spokeswoman of the grassroots group Sudan Change Now (SCN).

All daily papers are checked by national security officers before going to print. Articles might be taken out, or, at times, whole issues prevented from publishing.

Various Sudanese papers have recently been forced to close due to raised printing taxes, while others have been shut down by security forces, the Netherlands-based Radio Dabanga website reports.

Crackdowns on journalists have been serious, with Sudanese and international bloggers and journalists being detained. For instance, Bloomberg journalist Salma El-Wardany was detained on June 21 and later deported because she refused an order to stop covering protests.

Journalist and blogger Reem Abbas added that some online newspapers had also been banned (including Al-Rakoba and Hurriyat). To protest increased censorship, approximately 100 journalists held a demonstration in front of the Sudan’s National Commission for Human Rights in Khartoum on July 5.

“Two very outspoken Sudanese bloggers have been arrested (@mimzicalmimz and @simsimt) … and there are rumors that NISS (National Intelligence and Security Services) have been heavily monitoring Twitter (as well as Facebook) … and some people arrested report the NISS reading their tweets back to them during interrogation,” Sudanese activist Rawa Sadiq* noted in an email to EJC magazine.

Although mimzicalmimz was released, as of July 6, simsimt remained in detention.

“Since the beginning of #SudanRevolts, the amount of local Sudanese Twitter users has skyrocketed. This goes to show that people are starting to understand the importance of these outlets, not only in receiving information but also in sharing it and being an active participant in the process,” Sadiq said.

“There are cyber-jihadists hired by the security service to discredit tweeps, harass them on Twitter and Facebook, so we also have to counteract that,” she noted.

This Youtube video calls attention to the recent protests in Sudan and the #SudanRevolts movement.

While Sudanese media is muffled, international news coverage is also sporadic and heavily reliant on eyewitness accounts. This is partially due to security limitations. Also, historic events in other parts of the region, like ongoing conflict in Syria and Egyptian elections, have required a heavy allocation of resources.

Sadiq noted that the Sudanese protests might be harder to grasp for the commercial media: “Those of the international media who have caught wind of #SudanRevolts expect something easily ‘spottable’ and ‘coverable’ like Tahrir in Egypt (and this can be seen by their insistence to compare and call the events in Sudan ‘another Arab Spring’) and when they find that the protests are much smaller and more scattered, they lose interest.”

To garner interest, she and her friends have started a media campaign urging people around the world to share their portraits with a logo that says “Support #SudanRevolts”.

title=”#SudanRevolts advocates show their support in these photos shared in the Support Sudan Facebook group.” />

“A friend in Germany started the Support Sudan group on which people post their photos; we collect photos and share them … The photo campaign is aimed at showing people in the heart of #SudanRevolts that there are millions of people who are in solidarity with them and support the revolution,” she said.

The Khartoum-based organization SCN, whose outspoken aim since its founding in late 2010 has been to overthrow President Omar Al-Bashir’s military regime, also proactively uses Twitter and Facebook, and recently established a crowd map depicting places of arrests, violence, and protests across the country.

This helped them “receive more coverage and become better known, as well as playing a part in getting the information we post spread to a bigger online audience,” said spokeswoman Sameer.

The crowd map helps garner media interest, she said, and added that the information was updated on an hourly basis and verified by local persons on the ground.

Still, Sadiq worries that continued lack of awareness and coverage will give the government “free reign” to crack down with as much brutal force as they like; with no one watching, there’s no one to hold the government accountable.

“The Sudanese people for 24 years [since Omar Al-Bashir gained power] have put up with oppression, abject poverty, broken health care and education systems, and lack of basic human rights and freedoms,” Sadiq said.

“It’s time for a change, and I am trying to do whatever is in my power to make that change a reality.”

*Not her real name.

Eszter Farkas is currently a freelance journalist for various Hungarian and international publications, after serving as assistant editor and writer for In Sudan magazine published by the United Nations in Khartoum. She is interested in health, human rights, development and humanitarian reporting, and feels passionate about Central and East Africa.

This post originally appeared on the website of the European Journalism Center, an independent, international, non-profit institute dedicated to training journalists and media professionals to the highest standards in journalism.