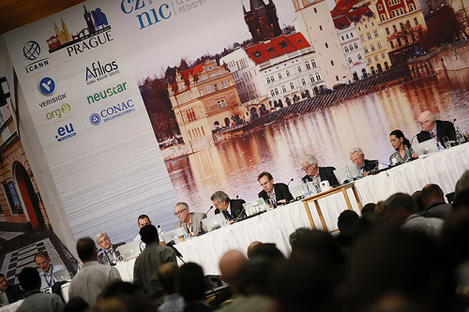 One year ago, the Internet Corporation for Assigned Names and Numbers launched a program designed to transform the appearance and infrastructure of the Internet as we know it. The new generic top-level domain program invited the world to apply for new gTLDs , also known as domain names, or the .com, .org, .net parts of the web address.

Last month, ICANN revealed the 1,930 applications for new domain names, prompting widespread coverage on news media. Most of these discussions focus on the commercial implications, i.e., who paid the most money, who will make the most money. But if many of the nearly 2,000 applications are approved, the greater question is: What kind of impact will trickle down to average web users around the world?

Should ICANN approve these domains, the immediate concerns for average web users are accessibility and security."

IT WILL TAKE GETTING USED TO

This animated video from ICANN’s website runs through the vast array of new domain applications.

Should ICANN approve these domains, the immediate concerns for average web users are accessibility and security.

Mason Fischer, web developer and former Hackstar at startup accelerator TechStars, said the impact of the new domain names will primarily be social. “Imagine I visit ebay.shoes, how do I know that it is a subsidiary of eBay and not a scam?” he explained to me in an interview. “But once people learn about these new domains, there will be nothing to worry about.”

Perhaps the more interesting question is how the new domain program can impact the tech startup industry that pumps out all the web-based products we consume day in and day out.

Growth in cloud computing, which allows users to access software, data storage, and so on in a remote “cloud” through web-based apps, has powered the mobile revolution and products that go beyond the traditional domain-based website. And Facebook’s $1 billion purchase of Instagram, the popular mobile photo-sharing app, further reinforced the question: Is mobile eclipsing the website?

The introduction of a wide variety of new domain options, however, may give tech startups more reason to revitalize their browser-based strategy.

Fischer’s own startup, KISSr.co, is a “Keep It Simple Stupid” cloud web host that synchronizes with Dropbox folders to allow easy domain hosting. Since KISSr.co combines cloud web hosting with domain reselling, it will directly experience the impact of the new domain program. KISSr currently offers domain registration for .kissr.co, .com ,.org, .net, and .info. But once new domains are approved, KISSr will resell hosting for many of the newly registered domains and will acquire a new and more relevant domain name for itself such as kissr.hosting or kissr.web. Many websites will respond in similar ways, acquiring new domain names to better represent themselves on the Internet. New domains may also inspire new products and services that make use of cloud technology and the diversity of domain names, much like KISSr.

Fischer does not think that the new domain program will cause startups to specifically choose mobile apps over full websites. However, the fact that there is a dichotomy of mobile apps and the web-browser means that new domains names will definitely affect the strategy of any startup that wants a web browser presence. In fact, the new domain program may and should push web developers to further define how exploring the Internet through a browser is different from but equally worthwhile as doing so on mobile apps.

WHAT IS A TRULY GLOBAL INTERNET?

One of the most important results of social media’s undying momentum is how much it has revolutionized the way people around the world connect to each other. The growth of social networks like Pinterest and the entire Internet meme culture (i.e., WhatShouldWeCallMe) suggests that Internet users are itching to identify, categorize, and share all the elements that make them who they are. It’s only natural that ICANN is working to adapt this diversity and creativity to a so-far largely unchanging domain system.

In the past year, the domain name has already started blurring country borders on the Internet through domain hacking. Web-based startups “domain hack” when they go a step further in product branding and snag up country code top-level domains for their company website. For example, Instagr.am’s .am belongs to Armenia, Last.fm’s .fm to Federated States of Micronesia, and Flavors.me’s .me to Montenegro. Domain hacking manifests in real chaos when the countries selling their domain names to the public become unstable or controversial — for instance, the fact that the Libyan government controls the .ly domain raised concerns during the Libyan Revolution over whether websites like bit.ly and ow.ly were supporting the Moammar Gadhafi regime.

These complex and ambiguous global Internet relationships may heighten as ICANN reveals more than 100 applications filed for Internationalized Domain Names (IDNs) using non-Latin scripts, such as Chinese, Arabic, and Japanese. As a sample, Chinese IDN applications range from .我爱你 (.iloveyou) to .亚马逊 (.amazon).

title=”Internationalized Domain Names (IDNs) introduce a language barrier to the Internet. Here, Chinese-language IDNs awaiting approval are shown on the left, and their translations to the right.” />

For those at the Internet Society (ISOC) working toward greater participation and accessibility in a global Net, opening up the Internet through the new domain program is a promising step. “We think that new gTLDs, in combination with Internationalized Domain Names (IDNs), will be of particular interest to non-English speaking users to better express their identity on the Internet,” ISOC Vice President Markus Kummer said in an email.

For Isaac Mao, China’s Internet expert and pioneering blogger, new domains in the form of romanized Chinese words (i.e., .wang) are promising, but IDNs, not so much. “I see very negative responses from local Internet users on Chinese-language domain names,” Mao said. For Mao, the foremost issue is that IDNs are a departure from the basic domain structure and thus introduce a “new firewall” to prevent border exploration on the Internet.

IDNs no doubt limit free entry to websites due to inherent language barriers. For example, those who cannot read or write Asian languages like Chinese, Japanese, or Korean, would have trouble accessing websites under potential new IDNs such as .政府, .삼성 and, .ポイント. This language barrier could encourage a new kind of censorship from the outside-in: Those who do not know the language of the IDNs will not be able to explore the content under those IDNs.

In Mao’s opinion, the better way to promote cultural diversity and protect languages on the Internet is through innovation in content applications, such as maps, search engines, and social media.

NOT IN KANSAS ANYMORE

The new domain program mobilizes the Internet to adopt a new domain taxonomy, one that ICANN hopes will match the breadth, depth, and creativity of the products and services developed for the web today. After all, more and more aspects of daily life are being brought onto the Internet through social media and e-commerce.

Hopefully, the ICANN review process can successfully identify the fine line between diversity and redundancy — or the Internet world will need a natural selection of its own.