Do We All Have iDisorders? 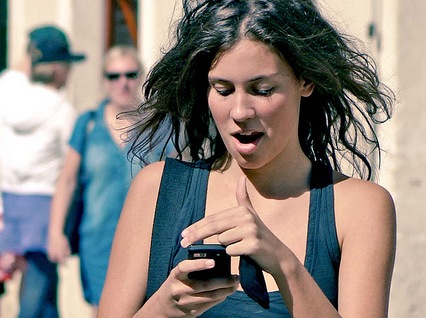 Photo by "Ktoine on Flickr":http://www.flickr.com/photos/ktoine/ and used here with Creative Commons license.

Raj Lal, a senior engineer for a mobile phone company, checked his iPhone at the dinner table before getting a searing look and some strong words from his wife in the middle of a romantic restaurant.

It was their 10th anniversary. Lal, 34, said he felt embarrassed about the scene, but more so that he didn’t even think about it as he pulled out the smartphone.

Technology overstimulates our brains with all the various sensory images we have. They're highly engaging. And what people aren't doing is taking time to let their minds calm down." - Larry Rosen

Lal isn’t the only one who can’t escape the lure of his mobile device. Today, it’s commonplace to compulsively check a smartphone or text friends on any, perhaps all, occasions, special or not.

This constant connectivity is so much a part of our culture that it’s become a hot debate in the last few years — so much so that two recently released books tackle the issue head on: Sherry Turkle’s book, “Alone Together: Why We Expect More from Technology and Less from Each Other” and “iDisorder: Understanding Our Obsession with Technology and Overcoming its Hold on Us”, in which psychologist Larry Rosen even coins a term for our problem: iDisorder.

“It’s a mood disorder that’s kind of a lifestyle,” Rosen said. “I’m a tech devotee, but on another level, they are dangerous and encourage obsessive behaviors.”

Rosen cites a study that shows that more than half of the iGeneration (born 1990 to 1998) and Net Generation (born 1980 to1989) respondents polled checked their text messages every 15 minutes or less. While the percentage goes down as the age goes up, Generation Xers (born 1965 to 1979) still make up 42 percent of frequent text-checkers, while 20 percent of Baby Boomers (born 1945 to 1964) seem to constantly check for calls. Rosen said it’s easy for technology to become an addiction.

In Sherry Turkle’s book, “Alone Together: Why We Expect More from Technology and Less from Each Other,” she interviewed several teens on their mobile phone addiction. One refused to quit texting while driving, saying, “If I get a Facebook message or something similar posted on my wall… I have to see it. I have to.” Others have chipped teeth or bruised themselves walking into furniture or objects while engrossed in their phones.

But similarly, older adults have also changed their expectations. In a chapter entitled “No Need to Call,” Turkle interviewed several people who say an email or a text is sufficient and using the phone to speak to another person is just unnecessary. One 46-year-old architect explains it this way, “(A phone call) promises more than I’m willing to deliver.”
Part of the reason, Turkle suggested, is that these people believe the human connection of a phone call is “asking too much, and they worry it will be received as demanding too much.” Turkle even found herself not calling a close friend because it might be considered intrusive.

Part of the attraction is also the idea that by not using the phone, which can lead to an unscripted conversation that may portray them as awkward, email and texting lets people present themselves as they wish.

Infiltrating our most intimate moments

Technology is also taking a toll on our sex lives. “People are so addicted to that immediacy, that when they’re up in the morning, before looking at their partner like they used to, they grab for the phone,” said Mary Jo Rapini, a sex and relationship psychotherapist based in Houston. “Your smartphone isn’t smart in bed.”

It’s also creating a generation of exhibitionists who are too shy to ask anyone out.

“What’s intimate now is not what we used to consider intimate,” Rapini said. “Teens are posting provocative pictures of themselves and sending nude pictures to each other.”
Rapini said that sending nude photos is a powerful act for kids who feel pretty powerless. “They control it and feel good about it. But when you meet someone you have no control over it,” she said. “Having a date and being judged, they don’t have the skills to handle that.”

The madness of multitasking

Rosen, a professor of psychology at CSU Dominguez Hills, said that human communication can’t compete with technology’s bells and whistles, likely the reason why some people often check their phones or messages while talking to another human being. “Technology overstimulates our brains with all the various sensory images we have,” he said. “They’re highly engaging. And what people aren’t doing is taking time to let their minds calm down.”

Instead of using your smartphone in the grocery line, Rosen advocates talking to someone else in line, looking at the magazines, or just taking time to decompress. “Go look at a flower, speak a foreign language or listen to music without ear plugs,” he suggested.
Without this ability, people can’t use metacognition, or the awareness of when to pay attention and determining when not to pay attention. “Instead they’re thinking about their phone and what they’re missing out on by not checking it,” he said.

The idea of multitasking, which had become such a corporate buzzword, is also a bit of a parlor trick. More productivity is observed in “unitasking,” but most multitaskers aren’t convinced of that. “They’re so interested in multitasking that when someone says, ‘Let’s talk face-to-face,’ they can’t do it,” Rosen said. The same goes for students. “You can’t listen to music and read a textbook at the same time.”

Many in the psychological and medical fields have debunked the myth of multitasking as productive. Instead, the interruptions lead to more stress, attention difficulties, and poor decision-making.

Another problem with our increasing Internet-laden society is that many children and young adults may believe all information found on the Internet is true. “There’s no media literacy training,” Rosen said. “You can’t just assume your kids are good at parsing media.”

The problem with teens and young adults is that their devices give them constant reinforcement and a squirt of dopamine, Rosen said. Worse, they feel they have to react to an incoming communication instantly or something bad will happen. That they will miss out on some conversation or news nugget that may be life-changing, he said. “That’s compulsion,” he said. “The Fear of Missing Out.”

The biggest challenge and first step for those addicted is turning off the phone while they go to sleep, Rosen said.

And how do you know you’re an addict? You start finding reasons to get up from the table so you can check your phone without anyone noticing. Manufacturing a reason is a bad sign. “You have to practice being strong,” Rosen said.

So why are children allowed to become so dependent on a smartphone? Because for many parents, having a child quiet and not needing attention is considered a blessing to an overworked parent, he said.

Parents can help lessen the grip of the smartphone by not using their own smartphone as much and establishing “dinners without technology.” Mainly he said he blamed many parents on what he termed “partial parenting,” where parents continuously give children partial attention. “That’s not how you should parent and the kids are not going to be OK,” he said. “Learn to focus better and longer.”

Mitchell Weiss, a business professor at the University of Hartford, told MediaShift that he worried about his students in the business world. “They avoid eye contact,” he said. “You can see them tense when you get too close…The failure to make eye contact used to mean hiding something or being devious, but you can’t think that way when dealing with these kids. Their social skills are not as developed.”

Weiss said that many of the bad behaviors learned at home and school won’t work at a job. “You can’t be text-messaging back and forth with friends,” he said. “Even having a conversation with an employee, their phone will make a noise, and I can see their eyes look over to the phone. And I can see they really want to pick up the phone but know they can’t.”

Despite the momentary lapse at his recent anniversary, Lal said that he tries to have more meaningful moments with friends and family. “The more you talk with people, the richer the experience,” he said. “And that’s more important than surfing the Web or talking to friends on Facebook.”

> Hands-Free Parenting: How Much You Gain When You Unplug by Rachel Stafford