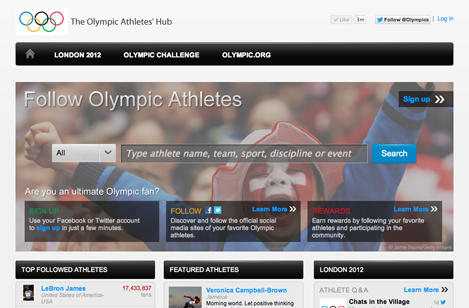 The above screenshot of the "Athletes' Hub":http://hub.olympic.org/, which integrates content from Facebook, Twitter, and Instagram, is the centerpiece of the IOC's social media strategy for the 2012 Summer Games.
Hopefully, the vast array of social media options will carry out their intended function -- to allow everyone involved in the Olympic Games to share more of their stories and thoughts in more engaging ways."
Click to read our whole series
ADVERTISEMENT

The 2012 Summer Olympic Games in London have largely been anticipated as the first social media Olympics. Athletes, fans, and the media shared their voices online during the 2010 Winter Games in Vancouver, but this time in London, even the International Olympic Committee (IOC) decided to adopt a full-fledged social media strategy. Starting with the Athletes’ Hub – fully integrated with Facebook, Twitter, and Instagram — fans can keep track of all their favorite Olympians. The IOC has also created official accounts on Tumblr and Instagram. Meanwhile, NBC continues to announce partnerships with social platforms, which now include Facebook, YouTube, Twitter, and Storify. All of these social media channels provide countless ways for viewers to fully immerse in the Olympic experience.

We also saw the ugly side of social media this week, as Greek athlete Voula Papachristou was promptly removed from the Games for posting a tweet that was deemed as racist. But hopefully, the vast array of social media options will carry out their intended function in the next two weeks – that is, to allow everyone involved in the London Olympic Games to share more of their stories and thoughts in more engaging ways. And to help you navigate the Games’ endless flow of exciting content, the following list compiles the best resources across the Web.

Automated Results from the Games

The London Olympics 2012. Get yours at bighugelabs.com

10 Bold Predictions for the 2012 Summer Olympics at CBSSports.com

London itself is something of an Olympic Village at LA Times

London Olympics: This time, Summer Games are about the athletes at LA Times

Twitter Embraces Olympics to Train for the Big Time at WSJ

NYC-2012: The Legacy of Losing the Olympics to London at WNYC

Go For It: Life Lessons from Girl Boxers at WNYC

If you know an Olympics resource that should be on this list but isn’t, please share in the comments, and we’ll add them!