Why Now Is the Time for Media Innovation in Africa 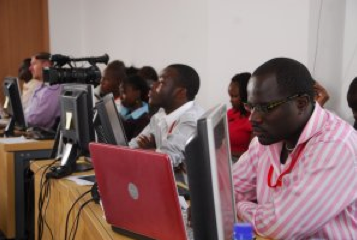 In Africa, where mobile news and digital innovation are growing but startup capital is too often scarce, innovators have a unique opportunity to help reinvent media: the African News Innovation Challenge.

The newly launched contest, modeled on the Knight News Challenge, will award $1 million (in increments of $12,500 to $100,000) to projects that create new ways to tell stories, distribute the news, and make money. It will also give technical advice, startup support and mentoring to the contest winners.

African media have a chance to leapfrog the disruptions that gutted newsrooms in the Global North. -Justin Arenstein

African Media Initiative (AMI) launched the contest May 10 with backing from Omidyar Network, Google, the Bill & Melinda Gates Foundation, the John S. and James L. Knight Foundation and others.

IJNet talked with Justin Arenstein, a media entrepreneur who works with AMI as part of his Knight International Journalism Fellowship. Arenstein talked about the contest, media disruption, and why the time is ripe for media innovation in Africa.

Justin Arenstein: The business models that underpin quality journalism are under threat. That’s because audiences and advertisers in Africa are starting to drift away from traditional media, like newspapers and TV. We haven’t yet seen the kind of apocalypse that undercut the media’s business models and reshaped the media landscape in North America, because Internet penetration remains so low in even the most wired African markets.

But mobile is fast emerging as a major transformative power. Already, in places like South Africa, mobile carries more advertising than all the traditional media combined. In places like Kenya, mobile banking is outpacing all traditional financial channels. And, everywhere from Nigeria to Uganda, people are turning to mobile for news or entertainment ahead of traditional media. People are hungrier than ever for quality content, so journalism isn’t under threat. But the old business models that fund our newsrooms are.

IJNet: Why is a contest like this needed in Africa in particular?

Arenstein: African media have a chance to leapfrog the disruptions that gutted newsrooms in the Global North. There is a small window of opportunity for the media to diversify their business models and the ways that they both gather and disseminate news. The African News Innovation Challenge (ANIC) hopes to kick-start the digital adaption that media need to do this, by taking some of the risk out of the early experimentation. The cash grants and technical support we’re offering will help pioneers produce working prototypes, so that they can scale their solutions more easily. We’re also hoping ANIC will be able to support Africa’s first substantive data journalism projects, and that it will produce solutions that get beyond the hype that surrounds citizen reporting.

IJNet: What are some good examples in Africa of the type of innovation the contest hopes to encourage?

Arenstein: There is lots of exciting media innovation already happening across Africa that we would love to replicate, or amplify. In Nigeria, we’ve seen a couple of geeks in a garage build Nollywood Love into a movie and music entertainment company that is reshaping the film industry there. In South Africa, we’ve seen Africa’s earliest Internet news pioneer, the Mail & Guardian, embrace crowdsourced citizen media through adoption of the Public Insight Network. And in Kenya we’re working with the World Bank to embed developers and coders into newsrooms, so that they can build a new generation of mobile news apps.

But perhaps the single best example of a simple role model that everyone can emulate is the way that an NTV journalist, Irene Choge, has used Kenya’s Open Data Initiative to solve the mystery of why that country’s rural schoolgirls tend to drop out of school between the ages of 12 and 14. She used public data sets from KODI to compare records from the education, public works, health and sanitation ministries, and discovered that the schools with the highest dropout rates are those in rural counties that don’t have ablution facilities. After using new tools like Google Refine and Google Fusion Tables to dig into the data, plus after getting out into the field to verify her analysis, Choge found that girls were dropping out after they hit puberty because there were no ablution facilities for when they started menstruating.

The first part of her documentary has been broadcast, and her newsroom is now building a simple, SMS-based mobile app to help parents find the status of their children’s schools. The app will be released when the second part of the documentary airs, and will help parents at schools without ablution facilities SMS or email the relevant officials, or unite with other parents to sign petitions or lobby government.

Why is this a good role model? Because Choge used digital tools to crunch masses of data and uncover hidden trends that would otherwise have been impenetrable. She then used data visualization to tell the story in a compelling but simple way that everyone could understand. Her newsroom then set about creating tools so that audiences could find out how the story affected them personally, so that they could take action if necessary.

IJNet: Who should apply? What skills do entrants need?

Arenstein: ANIC’s focus is on digital innovation, but you don’t have to be a programmer or developer to apply. We’re keen to hear from journalists and media entrepreneurs who have teamed up with technologists to try to solve some of the real-world challenges facing African media. This emphasis on hearing from journalists and media people is important, because all too often technologists have dominated similar initiatives elsewhere in the world.