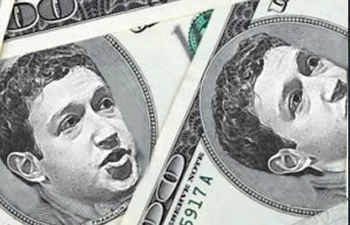 Image of Mark Zuckerberg on money via "toxichominid.com":http://toxichominid.com/2012/04/24/jealous-nerd-why-is-mark-zukerberg-pretending-not-to-be-obsessed-with-money/.

Welcome to the 49th episode of the Mediatwits podcast, with Mark Glaser and Dorian Benkoil as co-hosts. Today is the day for the Facebook IPO, so we’ve got it covered like a wet blanket. Special guests Debra Aho Williamson of eMarketer and Troy Young of SAY Media talk over the ins and outs of Facebook as it soars into the ionosphere. What are its possible weaknesses? Why is its ad revenue outlook falling short? Plus, it’s Internet Week in the Big Apple, and Dorian and Troy are there. What are ad folks talking about, outside of the Facebook IPO?

Plus, it’s web awards season time, and that means five-word acceptance speeches at the 16th annual Webby Awards, being streaming online on Monday. Special guest David-Michel Davies tells us why the awards will be even better this year, with geeky humorist Patton Oswalt hosting. But guest Josh Seifert thinks that digital awards can do better, and gives his own criticism of the Webbys and other advertising awards.

Over time, you'll see Facebook open up and provide more information to marketers so they feel more comfortable with the effectiveness of the advertising." -Debra Aho Williamson

1:30: Is there another tech bubble? Different this time

4:00: Rundown of stories on podcast

11:15: Young: Question is how much advertisers will spend on Facebook

14:00: Williamson: Facebook’s data store could be exciting… or scary

22:30: Davies: We’ve given out awards for more than just ads

25:10: Davies: Partnering with Buzzfeed to name “Meme of the Year”

Global and Social: Facebook’s Rise Around the World at Nielsen blog

What I saw in Zuckerberg’s bungalow at Fortune

Made In New York: Mayor Bloomberg shows off NYC’s vibrant tech scene with an online map at VentureBeat

Vote For The Webby Awards’ Meme Of The Year at BuzzFeed

Don’t forget to vote in our weekly poll, this time about the Facebook IPO: