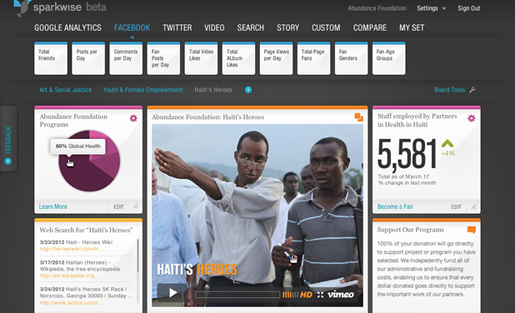 That a story can give voice to a cause and incite a social movement is an old concept. But at a recent gathering of more than 100 documentary filmmakers, social entrepreneurs and designers, the real question was not whether stories can make change happen, but how to make storytelling a systemic part of how a social enterprise disseminates its message and gathers support for its cause.

So how do you link storytelling to social enterprise? In a word, design.

The best way to understand the new model of philanthropy -- the way forward -- is that partnership. The true solutions can only happen from the bottom up." -Jeremy Kaye

That was the message at a lively panel discussion on April 30 at the Brower Center in Berkeley, Calif. Titled “Designing Change,” the panel was organized through a partnership of the Sundance Institute and the Skoll Foundation, and was the first event in a five-day lab hosted by Tomorrow Partners, a Berkeley-based design firm, whose recently released Sparkwise platform turned heads at the Berkeley IRP and MediaShift’s Collab/Space conference last month.

Introducing the panel, moderator Wendy Levy, a Senior Strategist for Film and Emerging Media at Tomorrow, said the goal was to “brainstorm solutions to global issues.”

a new notion of design

But incorporating design into social enterprise first involves understanding the concept. While the term “design” might invoke images of schematics and blueprints, as it was discussed on the panel, the new notion of design is focused on solving social problems, but the methods can vary with the application. “It can refer to systems, organizations, technology, almost anything,” Levy said via email. “Design helps get us from abstraction to clarity, using creativity and innovation to discover and realize great ideas.”

ADVERTISEMENT
Representatives of a variety of organizations gather at Designing Change to discuss ways for social entrepreneurs, documentary filmmakers and designers to work together.

Design can be an approach to solving problems, identifying solutions, and replicating them for future use. It can also fill the missing link between a cause, an organization, and a network of supporters.

“For a social entrepreneur, we’re dealing with a reality where someone is dying on the ground,” said Meagan Carnahan Fallone, a panelist and senior adviser at the Indian non-profit Barefoot College. “The designers we work with help to give that issue a voice.”

One problem discussed on the panel was how to incorporate film and video into the work of a social enterprise to not only tell stories, but make supporters feel like a part of an organization and the cause it represented. The panelists agreed that linking documentary film with social enterprises and the causes they represent requires getting beyond the paradigm of the feature-length theatrical production, to be watched by a passive audience. Stories with a direct, deliberate message can and should be short, sharable online, and watchable on a mobile device, they said.

Equally important, the panelists said, audiences should be treated as more than just casual observers. Getting people engaged requires including the audience in every facet of the operation, including production, crowd-sourcing narratives, and discussions that take the message beyond the computer screen. Filmmakers need to do more than present problems, said Cori Shepherd Stern, producer for the documentary “Partners in Health” and Executive Director for the Strongheart Fellowship Program; they need to tell stories which show how an audience can be part of the process.

“Filmmaking is a means to make those articulations,” she said.

Similarly, Jeremy Kaye, a panelist and designer, emphasized that social entrepreneurs should see “storytelling as a means to an end, rather than a means to itself.”

Locating sources of financial support was another area touched on by the panel. More than ever, social ventures rely on networks of individuals over foundations for support. Forty-page white papers with 10 sections and 100-plus references to groundwater analyses and USAID country studies might remain the gold standard for requesting funds from large foundations with a full-time staff of grant writers. But when an organization’s support base is not a foundation, but a network of everyday people, then a video which tells a story might be the most effective way to get people onboard.

Robin Smalley, whose organization, mothers2mothers, mentors African women on issues related to maternal health and AIDS, said she came to the panel not sure of what kind of support she wanted or who she wanted it from.

“Do we want to reach 5 million people for a dollar or five people for a million dollars?” she said, recalling her sense of uncertainty. “Do we approach [an audience] with apps, a website, video or written work?”

But thinking through mothers2mothers’ mission with designers at the lab allowed her to approach the problem “from every conceivable angle,” she said. At the end of it, she said she had a clear understanding of what kind of people she wanted to reach, what she wanted to tell them, how to do it, and how much it would cost.

Smalley said she left the lab with a sense of who she was reaching, what she was telling them, how to tell it, and how much all of it would cost. Though she declined to discuss its details, Smalley said a lesson she took from the event is that the best way to connect with an audience of supporters is not for the organization to tell its own story, but to facilitate a way for the people it works with to tell stories themselves.

“The best way to understand the new model of philanthropy — the way forward — is that partnership,” Kaye said toward the end of the panel discussion. “The true solutions can only happen from the bottom up.”

Alex Park is an investigative reporter with a particular interest in the frontier world of foreign direct investment in Africa. As a journalist, he has reported in the Bay Area and abroad. Since beginning in 2008, he has blogged in South Africa and reported on Northern Cyprus. In college, he also published an award-winning sociology paper on a 2008 period of anti-immigrant violence in South Africa, since cited multiple times in various academic works on the subject. Currently, his interest lies in charting new methods of collaboration between Western and African journalists to explain complex, global systems — be they governments, conflicts, trade patterns, or waves of immigration — for a general audience.