Can E-Books Succeed Without Amazon? 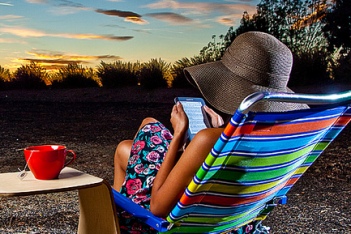 E-book author Victoria Hudson doesn’t like Amazon or the power it seems to wield with independent writers.

She didn’t want to sell her book and short stories on its Kindle Direct Publishing Select program, something she calls “too restrictive to authors.” Instead she chose an alternative book distributor based in the San Francisco Bay Area called Smashwords.

For those authors who do not work with Amazon out of principle, that's not a behavior I would encourage. Authors should be everywhere." -Mark Coker

“I want my work to be available in as many places as possible,” she said.

In the e-book market, Amazon.com is the biggest name in the game. But, as criticism mounts — especially from people who believe that Amazon, and specifically, it’s KDP Select Program, can hurt rather than help writers — alternatives like Smashwords are on the rise.

But can an independent author afford to bypass Amazon, especially when it provides so much exposure to self-published e-books? So far, the answer isn’t a clear one.

Most of Amazon’s criticism comes because of the KDP Select program. For most authors at the Kindle Store, books are usually split between two prices — 99 cents and $2.99. At $2.99, Amazon’s take is only 30 percent with 70 percent going to the author. At $2.98 and below, the author’s take is only 35 percent.

But the KDP program offers more visibility on Amazon if authors agree to give their book away for free for five days during a 90-day period. The author must also sell exclusively at the Kindle store for those 90 days. While the subject is a hot topic on the Kindle boards, many authors are already a part of the program in hopes of getting momentum and their title climbing the Kindle charts. “Charts are everything for Amazon publishers,” said Erica Sadun, an independent and traditionally published writer. “Chart position gives you momentum.”

Authors are also asked to loan out books for free at the Kindle Owners’ Lending Library for a chance at a pot of $600,000.

“Successful books are not in this program,” Sadun said. “It’s the ones trying to get market traction and trying to climb those charts.” It is one of the few ways that people can successfully market a book that would have no market otherwise, she added.

Questions sent to Amazon for comment on the KDP Select program and its new publishing arm went unanswered.

While that may be true, some say that Amazon’s heavy-handed attitude is hurting independent authors, and writers are looking for alternatives to the Amazon juggernaut.

Hudson, a writer from Hayward, Calif., has a chapter from a future book distributed by Smashwords as well as “No Red Pen: Writing, Writing Groups and Critique,” a handbook on giving better writing critiques.

“Smashwords was an easy way to get the electronic version out to a lot of markets,” she said.

Mark Coker created the Los Gatos, Calif.-based Smashwords four years ago after trying to get his own book, “Boob Tube,” published.

“The more I thought about the issue, the madder I got that a publisher has the power to stand between me and my potential audience,” he said.

Coker doesn’t like the KDP Select program because he questions its fairness. “It’s using self-published authors as pawns as a broader campaign to wage war against retail competitors,” he said. “If it wasn’t for the exclusivity requirement, I would be a big supporter of KDP Select. I love the idea that an author can receive payment when it’s borrowed.”

The exclusivity also hurts authors, he said. “We lost 6,000 to 7,000 books around the Christmas season,” he said. “Yes, in three months you can bring that book back, but you have lost any momentum that you had.”

Despite his dislike of some of Amazon’s practices, Coker holds no animosity toward the company nor does he suggest writers have any. “For those authors who do not work with Amazon out of principle, that’s not a behavior I would encourage,” he said. “Authors should be everywhere.”

Another alternative to publishing on Amazon is Portland, Ore.-based BookBaby, which has a $99 “self-publishing made easy” option which formats e-books, offers cover design, and has a better-known sister company called CD Baby that sells independent music. It distributes its books to the iBookstore, Amazon, Kobo, Barnes & Noble’s Nook, Sony Reader and others.

“We are taking nothing from the back end and passing on 100 percent of net royalties, so authors get to keep all of the money they earn,” said Brian Felsen, president of BookBaby. “Our payments are timely and transparent, and we pay immediately upon receipt from our partners.”

Hyperink is a new kind of e-book publisher, one that comes with $1.2 million in venture capital funds and seeks out experts to write targeted e-books.

Kevin Gao, a co-founder of digital publisher Hyperink, said his company looks at search engine data, book sales, and tables of content to find out the hottest book topics. “In general, there are two types of authors: professional writers who are freelance writers interested in writing e-books and experts with an area of expertise,” he said.

Gao said the year-old Hyperink launches about 100 titles a month on Kindle, Kobo and the iBookstore, and royalties to authors typically run 25-50 percent. But if experts need help organizing material or their thoughts, or the company needs a quick-hit e-book, Hyperink finds freelance writers to take on the task.

Zach Demby, a 28-year-old writer from Oakland, Calif., answered one of Hyperink’s initial calls for writers. He penned an 8,000-word study guide or “quicklet” for the book “Freakonomics” and was paid $200.

“I just found them on Craigslist,” he said. “They paid a flat fee plus royalties … But I didn’t expect any royalties.” Now with pay rates cut, Demby said he would rather put his efforts into more lucrative freelancing and his own work.

A recent Hyperink call for writers stated it was looking for new freelance writers to take on 5,000- to 8,000-word quicklets ranging $80 to $130 plus 15 percent royalties.

Gao said rates for writers have gone down on a per-word basis since its launch. “There’s a lot more supply and a lot of writers out there looking for work,” he said.

While the alternatives to Amazon exist, independent authors would be wise to watch what the online retailer is doing. Amazon is reinventing itself and becoming a traditional publisher, making it more difficult for writers to ignore the company on principle.

While the Kindle Store still handles the majority of e-book sales, Amazon has been busy creating its own stable of authors. It began its own publishing arm, Amazon Publishing, last May and published 122 books last fall. The publishing house now has six imprints: romance, mysteries, science fiction and fantasy, international authors, emerging authors, and how-to books. Would-be authors can now submit their book proposal directly to Amazon.

The courting of authors could easily edge out both publishers and agents by offering a direct-to-print service.

“The only really necessary people in the publishing process now are the writer and reader,” Russell Grandinetti, one of Amazon’s top executives, told the New York Times. “Everyone who stands between those two has both risk and opportunity.”

This story has been altered to correct that Hyperink does pay royalties.

> How to Publish Your E-Book by Carla King

> Special Series: Beyond the Book at MediaShift

One response to “Can E-Books Succeed Without Amazon?”