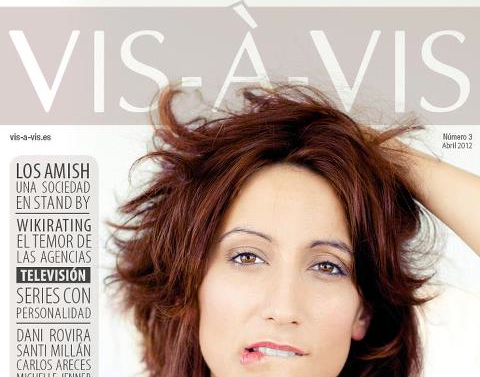 In a small office in Alcala Street, in the center of Madrid, a team of seven young entrepreneurial journalists are working overtime to produce the next issue of digital magazine Vis à Vis.

Conceived exclusively for the iPad and launched in January, Vis à Vis is an interactive, visual and modern publication that wants to reinvent journalism.

Journalism is going through a phase in which either you undertake your own idea or you have to conform to the reality of market." -Laura Blanco

The first edition of the magazine recorded up to 42,000 downloads. The third edition was released on April 1, and the team’s expectations are very high.

“Journalism is going through a phase in which either you undertake your own idea or you have to conform to the reality of market,” said Laura Blanco, the magazine’s editor in chief.

Together with Ángel Anaya, she holds the reins of this initiative that forged its roots during their first year at college. The seven editorial staff members are between 23 and 25 years old and studied together in the Spanish city of Valencia. After working on a project involving the editing of a print magazine, they decided to launch their own publication online.

When the iPad appeared on the market, she and her colleagues realized that it would be a suitable platform for a lifestyle magazine, because it could combine quality content with interactive features.

“In August [2011] we reached Madrid with much uncertainty, but with a lot of hope and enthusiasm,” Anaya said. He confessed that the magazine is “his creation” and passionately narrated the gestation process of the idea. In the beginning, the group of friends had to rely on family support to fund their project. When they asked for a small bank loan, they were told that they were “too young to take that risk.”

Vis à Vis is exclusively edited for the iPad, with all the possibilities that it offers, and a distinctive feature is that it’s free of charge. “Free forever,” reads its motto.

“Nowadays, it is very difficult to ask people to pay for something they know they can have for free,” Anaya said. That is why he bet fully on the digital environment from the start. “In addition, we had observed over the years that tablet readers’ profiles were moving from executives with high purchasing power to young readers.”

The magazine’s content consists of interviews with prominent figures in the areas of sports, television, fashion or gastronomy, presented in a personal “vis à vis” (face to face) setting. “We try to create a special atmosphere with each character. Interviews are always done in a kind of ‘petit comité’,” Blanco said.

Vis à Vis runs on a basic concept: All content types must be able to be consumed at different times of the day. “From extensive articles that you can read calmly at home during the weekend, up to short and more visual articles that you can rapidly go through on the bus or on the underground, that’s what Vis à Vis is all about: a magazine that escapes the ephemeral concept of the paper,” Blanco said.

The editorial team relies fundamentally on the power of social networks for its advertising strategy. “Word of mouth worked very fast,” Anaya said. The first issue of the magazine launched on January 4 and recorded about 42,000 downloads. In February, the second issue had already reached approximately 38,000 readers within two weeks.

For the third edition, the team has already secured the first advertisements that will finance the project. “Brands are seeing a great advertising potential in the interactivity offered by the iPad,” Anaya said. “They are contacting us directly.”

Thanks to their enthusiasm, Anaya and his colleagues have gradually overcome, step by step, the challenges posed by a society very anchored in the printed press. Some people have praised the magazine as a great initiative promoting journalism, while others have shown more skepticism with regards to long-term development of the project. Other times, though, some people have become so excited with the project that they have offered to help.

“It is a risky venture to undertake a business in times of crisis. But if you don’t do it, you will never be able to aspire to anything better,” Blanco said.

Laura Blanco and Ángel Anaya hold the reins of the initiative.

While Blanco and her colleagues don’t see their magazine’s only-for-iPad design as a restriction, they don’t reject the possibility of producing future versions of the magazine for other platforms. “We are covering a market in full expansion,” Anaya said.

The figures seem to prove it: Last February, Apple registered 25 billion downloads from its App Store, and the recent launch of the iPad 3, or New iPad, has beaten records worldwide, with more than 3 million sales in the first four days.

In a media world that’s evolving, Vis à Vis relies on two crucial elements for its success: the enthusiasm in reinventing a distribution model and the obstinate belief in the possibility of a new way of doing journalism.

Gina Gulberti holds a Master’s degree in Multimedia Journalism. In 2011, she obtained a Robert Shumann scholarship for journalists and worked for the audiovisual unit of the European Parliament in Brussels. She has worked for different Spanish media outlets such as RNE (public Spanish radio), Onda Cero radio and ADN journal. Her interests include Web 2.0., audiovisual production, European policies and independent journalism. Now based in Madrid, she is collaborating with digital newspapers while working for the press office of La Fourchette in Spain.

This piece was originally published by the European Journalism Centre, an independent non-profit institute dedicated to the highest standards in journalism, primarily through the further training of journalists and media professionals. Follow @ejcnet for Twitter updates, here on Facebook and on the EJC Online Journalism Community.