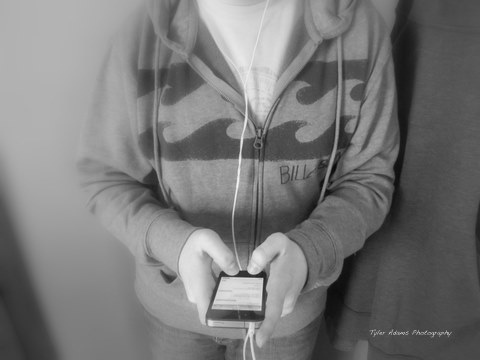 Photo by "Tyler-Adams on Flickr":http://www.flickr.com/photos/tye554/ and used here with Creative Commons license.

Much of the anxiety around tweens and social media lies in the fear that they don’t care about or understand privacy settings. Parents worry that kids will either willingly or unintentionally expose themselves to dangerous anonymous predators, or that they don’t fully understand that the information they share about themselves can be used against them.

But tweens are much more savvy about their privacy settings than adults give them credit for, even when it comes to subtleties of “frenemies” dynamics, according to a small, qualitative study by researchers at the Harvard Graduate School of Education that’s forthcoming in the journal Learning, Media, & Technology.

Tweens value privacy, seek privacy from both strangers and known others online, and use a variety of strategies to protect their privacy online." -Katie Davis and Carrie James

“Tweens value privacy, seek privacy from both strangers and known others online, and use a variety of strategies to protect their privacy online,” wrote researchers Katie Davis and Carrie James, who conducted in-depth interviews with 42 middle-school students for the study. “Tweens’ online privacy concerns are considerably broader than the ‘stranger danger’ messages they report hearing from teachers.”

Most kids are well aware of risks, and make “fairly sophisticated” decisions about privacy settings based on advice and information from their parents, teachers, and friends. They differentiate between people they don’t know out in the world (distant strangers) and those they don’t know in the community, such as high school students in their hometown (near strangers). Marisa, for example, a 10-year-old interviewed in the study (who technically is not allowed to use Facebook), “enjoys participating in virtual worlds and using instant messenger and Facebook to socialize with her friends”; is keenly aware of the risks — especially those related to privacy; and she doesn’t share highly sensitive personal information on her Facebook profile and actively blocks certain people.

“A growing body of research suggests that while teens share a great deal online, their willingness to share does not mean that they care little for privacy,” the authors wrote. In fact, they’re well aware of the importance of protecting their reputation and safety — even their future job prospects, according to a 2010 survey by Kim Thomas.

Just as adults do, tweens want to be in control of how they share personal information — and they do it in order to cultivate friendships and intimacy. Ironically, their sense of invasion of privacy comes not from friends or strangers, but the growing presence of adults, according to a 2011 study by danah boyd and Alice Marwick.

Rather than fearing the unknown stranger, young adults are more wary of the “known other” — parents, school teachers, classmates, etc. — for fear of “the potential for the known others to share embarrassing information about them”; 83 percent of the sample group cited at least one known other they wanted to maintain their privacy from; 71 percent cited at least one known adult. Strikingly, seven out of the 10 participants who reported an incident when their privacy was breached said it was “perpetrated by known others.”

Most of the kids interviewed admitted that they withhold some information even from their friends. One 12-year-old said she wanted to protect herself from people “who like to start drama.”

And they recognize privacy breach from adults, too. “Like one day, I was using my phone and [my teacher] took it from me and they went through my texts to see who I was texting,” one tween told the researchers.

A 14-year-old said, “I just want it to be like a teenager world … because you do talk about your teachers or your parents and what they’re doing, and how it frustrates you and gets you mad and stuff.”

In terms of strategies for privacy, 90 percent of the tweens said they don’t include their full names, addresses, phone numbers, and birth dates (only day and month, not the year). About 36 percent said they embedded false information to protect their privacy, and some did so as suggested by their parents.

But it’s worth noting that five of the 42 interviewed either didn’t know about specific or general privacy settings on Facebook, or hadn’t bothered to adjust them.

What Roles Do Adults Play?

Many tweens said they consult adults — such as parents or educators — about privacy concerns online; 89% said they conferred with parents, and 63% said they heard messages from educators.

In one case, a student reported a teacher using extreme scare tactics. “My computer lab teacher said that people on the Internet, they can threaten you — they’re going to hunt you and kill you. And that … they can find you and rape you.”

These kinds of messages fall short of conveying the social complexity of online interactions, the researchers say.

“Engage youth in conversation about approaches to privacy,” James said at a seminar at the Hechinger Institute last year. “Avoid making them more fearful than they are. Discuss and encourage empowering privacy. Educators can facilitate those conversations among youth. They can balance protective messages with those about responsibility and respect for others. Because fear can undercut the value of participating with communities.”