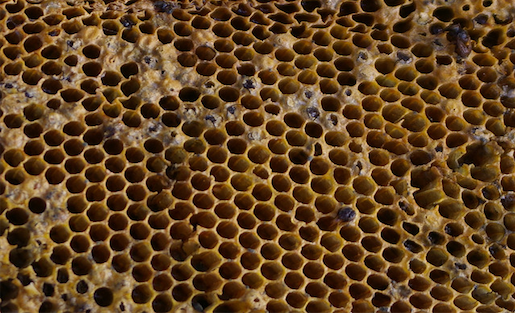 Birds do it, bees do it ... collaborate, that is. Photo by Flickr user Norm Hanson.

This is the first in an occasional series in which I’ll round up interesting examples of collaboration from around the web. Think of me as your friendly neighborhood Collaboration Curator. This week: a 40-plus year collaboration between IBM and design giants Charles and Ray Eames culminates in an iPad app; Craig Newmark says getting non-profits to collaborate ain’t easy; E.O. Wilson and Jonah Lehrer on whether we’re hard-wired for collaboration; and more.

It’s vintage design meets math meets the iPad with the latest collaboration between IBM and design giants Charles and Ray Eames, via the Eames Office, a new organization dedicated to preserving the couple’s legacy. Minds of Modern Mathematics is a free iPad app “that re-imagines a classic 50-foot infographic on the history of math created by husband-and-wife design team Charles and Ray Eames and displayed at the 1964 World’s Fair in New York City.” As IBM’s press release notes, that World’s Fair exhibit actually grew out of a museum exhibit that IBM commissioned the Eameses to produce.

Are We Wired for Collaboration?

Craigslist founder Craig Newmark says collaboration is hard. One year after the launch of Craigconnects, Second Act magazine asked Newmark, “A big part of Craigconnects is to get non-profits to collaborate more effectively. Has that proven challenging, given that all charities are in competition for the same dollars?” Newmark candidly responded:

So far, I don’t really know how to make it happen, since most groups of all kinds find it hard to work with each other. In specific cases my plan is to quietly prod them into collaboration, nudging them now and then discreetly. Seems like this is a multi-year effort.

And yet, as Newmark’s comments reflect, even those who have dedicated their lives and careers to charitable causes don’t instinctively know how to collaborate effectively. I’ve seen this in the public media and arts communities, where people passionate about serving the community can be equally passionate about protecting their organizational turf.

Certainly, this same dynamic plays out in the world of journalism … which is why it’s taken a recession to really push journalists to collaborate. Increased journalistic collaboration is a pragmatic response to shrinking resources, not a sudden altruistic impulse. Of course, the competitive marketplace rewards us for emphasizing what divides and differentiates us as organizations. A marketing campaign that said, “We’re improving the environment — just like the other guys!” would be ill-advised.

But I don’t think collaboration actually asks you to set aside your differences — it just asks you to leverage those differences in pursuit of a common goal, whether that goal is illuminating the history of mathematics, increasing charitable donations to a cause, or reporting the news. When I managed two large-scale public media collaborations, each project’s design emphasized the unique skills, distribution platforms or other assets each partner organization brought to the table. This is a no-brainer: Why bring partners together in the first place, if they don’t have complementary strengths?

To me, this is what makes collaboration exciting: getting to create something with people who share your mission or vision, and whose skills are complementary to your own. Heck, it’s what makes any kind of team-based creative endeavor exciting.

Tell me: What’s the best collaboration you’ve ever been a part of? (It can be professional, creative, something from your personal life — anything.) What was it about the collaboration that made it so rewarding?