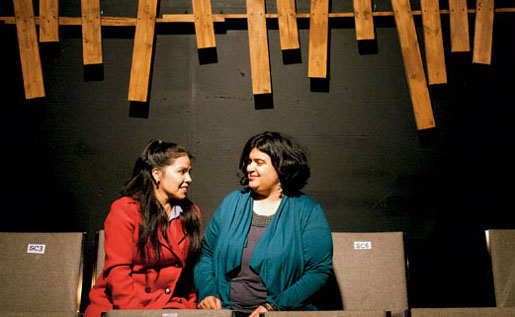 After weeks of examining stories of human trafficking in the Bay Area, reporters for the nonprofit San Francisco Public Press knew they had their next major project. They also knew they couldn’t report it alone.

“We couldn’t afford to do it on our own,” said Michael Stoll, executive director of the quarterly publication. “We decided to go to ethnic media because this was a story where ethnic media had a particular expertise, and had access to an audience that really cares about the issue.”

We decided to go to ethnic media because this was a story where ethnic media had a particular expertise, and had access to an audience that really cares about the issue." -Michael Stoll

While national collaborations are influential, local partnerships are essential. This is evident especially when local media hasn’t covered the subject adequately.

The collaborative project, “Force, Fraud, Coercion: Human Trafficking in the Bay Area,” was reported by journalists from three Bay Area not-for-profit news organizations, including New America Media and El Tecolote, San Francisco’s bilingual newspaper. La Opinion, California’s largest Spanish-language daily, also picked up the story, as did dozens of ethnic media outlets. The project included “Making a Better Life,” a comic strip featuring true stories of human trafficking — like a home care worker who was punched in the face. (A client told him to get over it since the employer wasn’t going to report it.)

Reporters found that despite the state’s anti-human trafficking bill, there are significant barriers to locking up perpetrators, including law enforcement’s inability to even recognize the crime. In addition, the project found that little coordination exists between law enforcement and the agencies that help victims.

National collaborations — such as the Center for Public Integrity, NPR and five regional nonprofit news organizations’ investigation of sexual assaults on college campuses — have typically been highlighted as models for collaborative public service reporting. The project “Sexual Assaults on Campus: A Frustrating Search for Justice“ showed that students responsible for campus sex assaults often face little or no punishment from the school’s judicial system, even in cases involving repeat offenders.

Elena Shore, editor at New America Media, called “Force, Fraud and Coercion” a true collaboration. “From the beginning we were involved — from brainstorming ideas all the way through reporting and editing,” she said.

Stoll, who managed the project, said he wanted to ensure that editors met on a regular basis.

“This was a big project, and it involved a lot of manpower as an organization … There were a lot of hours spent on the stories,” he said.

Stoll said editors from the three publications met face-to-face regularly to discuss the stories, deadlines and reporting progress of the human trafficking project. Sometimes they met at NAM or El Tecolote offices. During the editing, the stories went through multiple editors from the three news outlets. Pro bono attorneys reviewed some stories for the Public Press and NAM.

While the Public Press had collaborated with other news organizations in the past, this was the first time their partnership was “authentically collaborative,” Stoll said. As a result, they didn’t have to do as much fundraising as they normally would, since reporters’ salaries were coming from their respective employers.

Despite requiring an extra level of management, collaborations benefit from the combined knowledge and skills of multiple organizations working together, “where one has experience in a certain community and the other has the resources or access to statistics and expertise to bring to the table” explained Shore. But the key point, she said, is that collaboration “allows news organizations to cover things they normally would not cover.”

Have you been part of a local news collaboration? If so, share your thoughts on how it went in the comments below.