Can Journalism Find Its Own ‘Brooklyn Boheme’ to Inspire Collaboration? 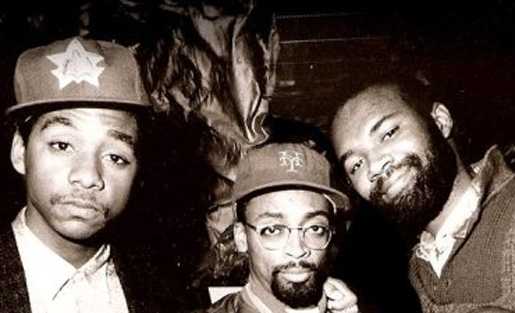 The poster for "Brooklyn Boheme," a documentary tribute to Fort Greene, Brooklyn's thriving artistic community in the 1980s and early '90s.

In 1980s Brooklyn, Spike Lee knocked on Branford Marsalis’ door to introduce himself; Marsalis was soon playing saxophone for several Spike Lee joints. Elsewhere in the same neighborhood, Erykah Badu ran an idea for a rhyme by Carl Hancock Rux, which would later turn into her famous song, “Bag Lady.” As the new documentary “Brooklyn Boheme“ from directors Nelson George and Diane Paragas illustrates, such informal artistic collaboration was par for the course for a decade-or-so-long span in Brooklyn’s Fort Greene neighborhood, an almost magical coming together of artists in a particular time and place. (Watch the trailer here.)

Why is it that for so many journalists, deadlines feel like an obstacle to collaboration? Does this have to do with inherent differences between reporting and songwriting?"

How do we create environments that encourage such prolific collaboration? Are such circumstances necessarily serendipitous or can we orchestrate them?

Cut to 30 years later, and my husband, Jordan, is an active member of a different kind of artistic community: February Album Writing Month, or FAWM, whose hub resides at fawm.org. Each year, thousands of amateur musicians come together from around the globe; the goal is for each participant to write a minimum of 14 songs in 28 days (this year, it’s 14 1/2, thanks to the leap year). People post their creations to the FAWM website, where they also share feedback with each other, most of it positive.

Through his participation in FAWM, Jordan’s found a number of artistic collaborators; he’s written songs with former strangers from Norway and Amsterdam and with his friend John from Madison, Wis. John’s one of his best friends, actually, and they were in a band together back in high school, but they hadn’t collaborated musically in years, until FAWM came along and gave them the nudge they needed. Now John has an album out, and Jordan is featured on a number of tracks.

A Fort Greene in the ’80s for journalists?

So how does all this relate to journalism? Well, I wonder — is there a “Fort Greene in the ’80s” for journalists — a time and place when journalists came together and fueled each other’s work? Are we living through that time now?

And what about FAWM — is there a website or other online community that fosters that kind of collaboration in the news space? (Could Collaboration Central be that space?)

I wonder, what is it about FAWM that gets people truly collaborating? After all, there are plenty of online communities whose members don’t interact in nearly as constructive or collaborative a manner. Is it the project’s built-in time constraint? With tight deadlines looming, are musicians more likely to reach out to people who provide complementary skills, who can help them produce more songs, more quickly?

Jordan says yes, this is part of it. “Collaborating starts out as a pragmatic thing. It makes it possible to write more songs.” OK — so, collaboration as a strategy for meeting deadlines. Why is it then, that for so many journalists, deadlines feel like an obstacle to collaboration? Does this have to do with inherent differences between reporting and songwriting? Or is it more a factor of journalists working inside organizations with inflexible processes in place?

Of course, the benefits of musical collaboration transcend efficiency. “I end up having written songs I never would have written alone,” Jordan said about his FAWM partnerships, “and I learn things about my own songwriting by working with partners.”

In a blog post back in 2010, musician David Byrne muses on these exact themes, noting:

To have one’s work responded to by another mind, or to have to stretch one’s own creative muscles to accommodate someone else’s muse, is a satisfying exercise. It gets us outside of our self-created boxes. When it works, the surprising result produces some kind of endorphin equivalent that is a kind of creative high.

Could journalists who collaborate experience a similar level of intellectual and creative satisfaction?

Of course, sometimes — in arts and entertainment, and in the news biz — collaboration is about the bottom line, more than it is about the virtues of two (or three or ten) minds versus one. As Carrie Lozano wrote on this site earlier this week, “While collaboration itself doesn’t solve the question of how to pay for … reporting, it does put more resources toward a story.” In the blog post I mentioned above, Byrne acknowledges:

“There are also some more market-oriented, pragmatic arguments for collaboration. If both collaborators are sort of well known, then there is a natural interest among the combined set of music fans. Part of the marketing has been done without having to do any corny PR.”

Market-oriented collaborations are easy to find. This past week, for example, Rihanna and Chris Brown released remix tracks featuring each other in what many, including Salon’s Mary Elizabeth Williams and Slate.com’s J. Brydon Lowder, viewed as a collaboration motivated by commercial versus artistic considerations. Of course, we can’t know for sure without getting inside the artists’ heads, but surely, Rihanna and Brown are no Lennon and McCartney — or, to bring it back to Fort Greene, they’re no Talib Kweli and Mos Def (aka Black Star).

So: Who are journalism’s Rihannas and Chris Browns, collaborating to make a buck (or spin an image) … and who are our Lennons and McCartneys? Who are our Black Stars?