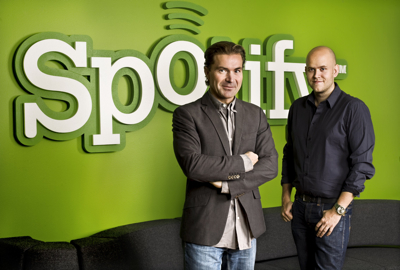 Spotify (founders Daniel Ek and Martin Lorentzen pictured here) is out in full force at this year's SXSW Music event in Austin. One of the debates the company is weighing in on is about "windowing" -- the idea that certain albums should be withheld from streaming services for a certain time after release to increase sales on iTunes and other outlets. Spotify isn't a big believer in that. Photo courtesy of Spotify.

The common ground between technology developers and music companies becomes clearer and clearer every year at SXSW. For many years, the festival has seen a distinct interdependence between the two industries. However, as the Interactive conference transitions into the Music conference, the two industries are beginning to show significantly different trajectories.

While the Interactive conference focuses more and more on emerging technology and the evolving economy surrounding it, attendees of the Music conference are now working hard to define the core set of functions and tools necessary to sustain their businesses.

As the Interactive conference transitions into the Music conference, the two industries are beginning to show significantly different trajectories.

Companies including record labels, management firms, music retailers and content outlets are realizing that the innovations of the past five years are solidifying, and a core group of valuable sectors are emerging.

Streaming services such as Spotify and Rdio continue to make their presences felt at the conference. SXSW has become a key time to announce new features, promotions and deals. The number of songs and overall features of each service have begun to standardize; the next challenge is differentiation and subscriber acquisition.

Spotify continues to see rapid growth, announcing more than 3 million paying subscribers worldwide in January. At SXSW, the company has been focused on discussing strategy and taking stances in open debates. One of these conversations centers on the idea that withholding music from streaming services for a limited time (“windowing”) will increase sales at iTunes, Amazon and other outlets. Spotify’s position is that these are two different user types, and if an album isn’t available on Spotify, consumers won’t go to iTunes to purchase it but instead will go to YouTube where they will find the music for free.

Rdio, another streaming service seeing rapid worldwide expansion, rolled out out a new interface and features this week that focus more on album art, social engagement and new ways to discover music. A much more interactive sharing experience has been introduced into the web app, which allows simple drag-and-drop sharing and social discovery. The company feels this area is still in its infancy, but holds great value to both users and content owners.

Another constant discussion at SXSW Music is the value of engagement with music via technology. The industry has collectively moved beyond a focus on simple awareness-generation and understands that there is tremendous opportunity for true interaction with fans. Companies like Turntable.fm are innovating on how fans use technology to engage with music, friends and other fans.

Turntable.fm gained a lot of attention and users mid-2011 by providing a social listening experience that combined DJ culture, visualization and gamification. The company quickly found itself in the middle of a discussion as to the licenses it needed to legally operate. The service was unlike anything prior, and this resulted in a need to redefine certain aspects of its licenses. The company announced at SXSW that it’s finished negotiations and is now licensed by all four major labels, allowing it to now grow the business and expand its content base.

Apps like Turntable and functions like Facebook’s “listen with” show that social listening and other engaging forms of music discovery are becoming accepted means of marketing; the question now becomes how to further monetize these channels.

As subscription services mature and engagement becomes an increasingly valued metric, new services are emerging to track and analyze the associated data. In the next installment of SXSW Music coverage, MediaShift will look at the latest developments in this space including software such as Next Big Sound and the newly announced “On-Demand Songs” chart powered by Billboard, Nielsen and NARM.