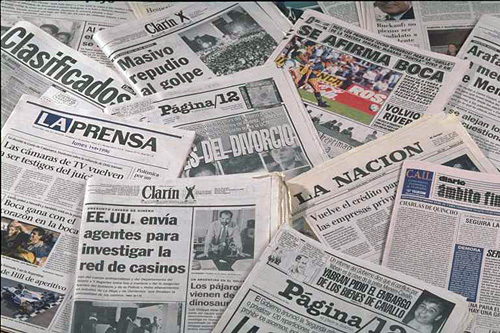 Martin Becerra, a media investigator, journalist and academic, argues that indirect threats to press freedom, in the Argentinian case, are linked to "the capricious and arbitrary distribution of official propaganda by the state."

Ten years after the wave of social unrest that set the streets of Buenos Aires on fire, the Argentine government is toughening state control over information made available to the public.

“As Argentina enters a period of increasing economic uncertainty, having greater power over the media will allow the government to better control information available to the public and presumably help to dampen extreme social reactions to economic turmoil and policy changes,” Strategic Forecasting, the geopolitical analysis firm, wrote in a report published last month.

There are no clear rules about how the state distributes news, and this is combined with a lack of transparency and a huge margin for arbitrary decisions." -Daniel Dessein

The first law, known as the Anti-terrorism law, allows for harsher sentences “against actions whose purpose is to terrorize the population” and has been criticized by local media outlets and press freedom groups as it may potentially hamper standard news reporting.

According to José Sbatella, head of Argentina’s Financial Investigation Unit (UIF), any act that might cause general alarm could in fact fall under the “terrorism” category and be sanctioned accordingly.

For example, if a newspaper publishes a negative report about a bank, causing panic among account holders and a potential bank run (a similar situation led to the 2001 cap on monthly cash withdrawals, known as Corralito), the newspaper itself could be sanctioned for igniting a spiral of fear.

A matter of public interest?

More fuel was added to the fire when a second law declared the production, commercialization and distribution of newsprint a “matter of public interest.”

The new law forces Papel Prensa, the company that controls 78 percent of the country’s newsprint, to satisfy the totality of the internal demand in newsprint. This means that Papel Prensa must increase its productivity and operate at its full capacity.

The public-private partnership Papel Prensa SA is currently jointly owned by the state and the two largest national newspapers, Clarín and La Nación.

If Clarín and La Nación, which respectively own 49 percent and 22 percent of Papel Prensa, do not comply with the new regulations, the state could increase its stake in the company.

Cristina Fernández de Kirchner, president of Argentina, justified the measure as an attempt to liberalize a market from Papel Prensa’s monopoly.

“Papel Prensa is the only company that produces newsprint in this country,” Fernández declared. “Whoever controls [the newsprint market] controls the written word in Argentina.”

Local media studies show that up until 2010, Clarín and La Nación bought paper through Papel Prensa with a 25 percent discount, and were therefore able to be more competitive than others in the news market.

The Inter American Society of Press (SIP) denounced the state’s attempt to “control the media” as an unconstitutional threat to press freedom, a criticism echoed by the Argentine Association of Journalistic Entities (ADEPA).

Professor Julio Moyano, senior media expert and former head of the Communications and Media Studies department at the University of Buenos Aires, does not share the same concern.

“It’s a paradox: In order to restore economic liberalism, here in Argentina the state has to intervene to dismantle a monopoly that was not created in a legitimate way in the past,” Moyano explained.

The 1976 takeover of Papel Prensa by Clarín and La Nación is still a matter of court dispute. The two leading publications allegedly conspired with the military junta to illegally buy out the company from its former owner, a dissident leftist banker who later disappeared in a plane crash.

State control vs. freedom of the press

According to Martin Becerra, a media investigator, journalist and academic, the Argentinian press should beware of another, more subtle form of indirect state control than direct government censorship.

Becerra argued that indirect threats to press freedom, in the Argentinian case, are linked to “the capricious and arbitrary distribution of official propaganda by the state.”

“In this respect, Argentina still has a lot to improve,” he added.

A report by Poder Ciudadano, an NGO (non-governmental organization) devoted to corruption monitoring and public data transparency, shows that the Argentine government is the biggest national spender in the advertising market.

The government’s advertising budget has skyrocketed from the equivalent of US$10.6 million in 2003, the year when the former President Nestor Kirshner — the late husband of Cristina Fernández de Kirshner — came to power, to US$27.8 million.

“The main challenge is the economic sustainability of small and middle-sized media organizations that are aspiring to get a bigger market share: Many of them still live off the state,” pointed out Daniel Dessein, president of the ADEPA Press Freedom Commission.

“Press freedom is naturally flawed if a publication has to stick to the official version in order to get the money,” Dessein said. “There are no clear rules about how the state distributes news, and this is combined with a lack of transparency and a huge margin for arbitrary decisions.”

In spite of claims of state discrimination against opposition media (El Trece, the leading television channel owned by Grupo Clarín, says that it was allocated less than 5 percent of the government’s total broadcasting advertising budget), the Poder Ciudadano study shows that official state advertising in 2010 accounted for only 10 percent of the whole advertising expenditure in the country.

Grupo Clarín and the Argentinian market.

Private firms — which invest especially in television — are the main players in the advertising business, and their influence has considerably increased since the government freed up frequencies in 2009 and an increasing number of small radios and television channels were able to enter the media landscape.

By setting a limit on the broadcasting licenses controlled by the more powerful groups, the 2009 Media Law especially hit Grupo Clarín, forcing it to sell off assets such as its cable television division.

“In Latin America, a lack of regulation in recent decades has allowed the building up of powerful media oligopolies,” political journalist Celina Andreassi said. “In Chile for example, two groups — Copeso and Edwards — control 98 percent of the daily newspaper readership. In the face of such concentration, governments in the region are beginning to take action to democratize the media sector. Argentina has been the first country to tackle the issue.”

The challenge now for President Fernández will be to open up a concentrated media market formed in the dark days of the dictatorship while preserving press freedom.

Lillo Montalto Monella is an Italian reporter, investigative journalist and photographer currently based in Argentina. Lillo has a Masters in International Journalism from the City University of London and accepts freelance assignments for both English and Italian media.

This piece was originally published by the European Journalism Centre, an independent non-profit institute dedicated to the highest standards in journalism, primarily through the further training of journalists and media professionals. Follow @ejcnet for Twitter updates, here on Facebook and on the EJC Online Journalism Community.