Why Esquire Created a Trailer for the Zanesville Animal Escape Story 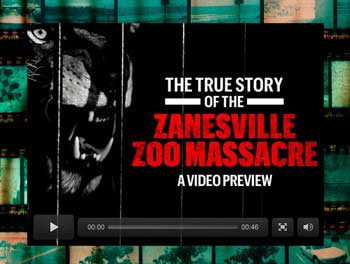 In order to promote a story it thought might run into some competition, Esquire recently released a 46-second video trailer for a story in its March print edition.

Esquire recently released a 46-second video trailer for a story in its March print edition, available on newsstands yesterday: “Animals,” by Chris Jones, a feature about the escape and eventual killing of zoo animals in Zanesville, Ohio.

"The piece was, in the end, so relentless that it really did feel like a thriller. We knew for sure that other magazines were working on the story, so we wanted to raise its profile relative to other stories that came out." -Peter Griffin

Magazines have been creating videos to accompany articles for a while now. However, Esquire put an innovative twist on the practice by making a trailer-style video and using it to publicize the article before it was printed.

Esquire’s trailer experiment might be the first foray into a new method of getting readers to engage with stories and a magazine’s brand. The challenge will be figuring out which stories might be suited for trailers and how to create effective, intriguing trailers.

Esquire’s initial plan for Jones’ Zanesville story and its promotion didn’t exactly work out. Jones said in a recent interview that he learned during his time reporting in Zanesville that another writer was in town, working on the same story — and not just any writer, but one from Esquire’s competitor GQ.

The behind-the-scenes drama of Esquire and GQ’s dueling Zanesville stories has been documented elsewhere. Wanting to get out in front, the Esquire team considered ways to bring more attention to their story. Deputy Editor Peter Griffin, who worked with Jones on the story, thought of a promotional technique that hadn’t really been attempted before for a magazine article.

The cover of the March edition of Esquire.

“The piece was, in the end, so relentless that it really did feel like a thriller. We knew for sure that other magazines were working on the story, so we wanted to raise its profile relative to other stories that came out,” Griffin said. “I suggested that it was like the action movie of the winter.”

And so the trailer idea was born, and fortunately, its materials were already either in the works or readily available. Esquire has been producing video for its tablet editions for some time. They had already discussed creating an animation of the planned print layout, which would move viewers up the driveway of the ill-fated Zanesville farm to engage them in the scene. There were also photos, a recording of a 911 call from the incident, and digital audio recordings of Jones’ interviews. (Luckily, Jones had recently started using a digital recorder, which provided better sound quality.)

With those materials in hand, creating the trailer was relatively simple. Griffin worked with Scott Mebus, an executive producer in the Hearst Digital Media video department, on the trailer.

“Our graphics person had started creating a fun open” for the article in the tablet edition, Mebus said. With the “great assets” Esquire provided, Mebus’ team could go even further.

“We had a 911 call. We had these great interviews with soundbites. The story was kind of written for a trailer, and we had great visual assets from the story itself,” Mebus said.

In addition to the 46-second trailer, Mebus’ team also produced a second trailer. But circumstances intervened in the original plan for distributing the two trailers.

The plan for an online preview of the story had to change.

Griffin explained that the first trailer was going to be released with a brief “preview” story by Jones about his experiences reporting the story. When GQ released its full story online earlier than expected, Esquire rushed its full story to its website as well. The following week, the second trailer was to be released, but the competition between the stories led to a change of plans.

“All that went away because we had to get the story up more quickly,” Griffin said. Had the trailer been released according to the initial plan, he said, “we’ll never know what kind of effect it would have had.”

It’s been hard to tell whether the trailer has really driven more traffic to the story, though it has generated media attention, and was also distributed through the magazine’s social media channels.

The second trailer — which is said to be longer and to include the sound of a gunshot — is planned for release with the magazine’s March print edition. Griffin hopes the new video will “refresh attention” to the story.

Griffin said he’d try another trailer for the right story in future.

“It would have to … have basic materials available — photography and audio or video. This lends itself to strong, narrative stories,” he said. “It will be interesting to see if it’s worth doing, or if the novelty wears off.”

Griffin sees video trailers as a way to entice people into sampling the experience of great writing.

“It’s still true that reading a strong piece of writing is more immersive than watching a movie or a film, because you’re so totally concentrated on it,” he said. “If there’s a way to tease people into a taste of that, I think trailers can be good.”

Though Esquire’s story trailer was innovative, short, trailer-style promotional videos for books have been around for some time.

Sheila Clover English, the CEO of Circle of Seven Productions, creates videos to promote a variety of print products. Her videos have been primarily for books, but she sees the introduction of magazine story trailers as a logical progression from existing promotional methods.

English points out that there are other benefits of promotional videos for magazines, including search-engine optimization (SEO) and brand development.

“People spend millions of dollars to be on the first page of Google, but video can put you there without spending that money,” she said.

A well-produced trailer can also represent the larger image, style and content of the magazine and its brand. “It lets people know about the kind of articles they can find in the magazine, beyond ‘Here’s what our big article is this month.’ It’s an opportunity to let people know, ‘This is what we’re about, this is what we care about featuring, this is how we talk about them,’” English said.

Trailers may also prove to be an effective way to distinguish magazines’ special offerings.

“Print products are fighting to be heard, and there’s a lot more noise out there,” said Mebus of Hearst Digital Media.

However, there’s also a lot of noise out there in that there’s lots of uninteresting, low-quality online video. Mebus recommends that aspiring story trailer creators work with only the best content and model their trailers on the best professional movie and TV promotions.

“You have to really make sure you have the right kind of assets. If you don’t have the right pieces, it would just be a few graphics and a title,” Mebus said. “We put top talent on it. This is not the kind of thing you can hand to a PA [production assistant]. You need a creative mind. Some of the best people in Hollywood are the trailer editors.”

“I think the more sexy you try to make them, the less effective they would be. Trailers are trying to use advertising and filmmaking techniques to promote print — words — and those are two different things,” he said. “If you make it too slick, or too much like a marketing thing, that might not sync up right with people. If trailers are simple and going off the actual assets of the story itself, and are put together by people involved in the story, it will connect better with viewers.”

Whether or not magazine story trailers end up succeeding in the long run, Griffin sees one more intangible benefit from Esquire’s experiment.

“They’re fun. They get everyone juiced up around here,” he said. “We’re making an effort to promote things that we all feel good about, and it gets people thinking creatively.”

Film image behind trailer still by Travis Hornung on Flickr.