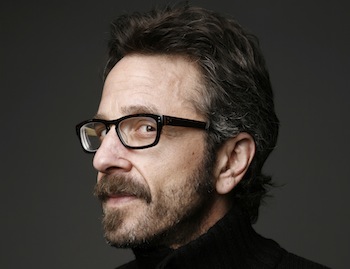 Comedian Marc Maron launched the WTF podcast with few prospects and "nothing to lose." Now, it's helping him earn a living. Photo by Seth Olenick. This and all photos courtesy of "WTFPod.com":http://www.wtfpod.com

Just over two years ago, comedian Marc Maron was out of a job, couldn’t get standup gigs and was going through a debilitating divorce that had put him in debt.

With “nothing to lose,” as he put it, he launched the WTF podcast, by sneaking into the New York offices of Air America radio, from which he’d just been fired.

"Audio is very intimate. When you're sitting there talking with somebody for a long time, eventually the pretenses kind of fall away." - Marc Maron

Nearly 250 episodes later, WTF gets more than 2.75 million downloads per month, has multiple sponsors, and has helped sell out Maron’s live shows in Seattle and San Francisco.

“I couldn’t get club work at all. Now I can work most weekends if I want,” Maron told me this month in one of two telephone interviews, first from his home in Los Angeles, then from a hotel in Atlanta, where he was preparing for a show. (You can listen to much of the audio from the calls here.)

“It doesn’t cost much to do a podcast,” Maron said. “I did it out of desperation and passion, and it sort of blossomed into this.”

Connecting With Fans — and Famous Guests

On his podcast, Maron is raw and genuine. He curses (the show starts with variations on the words that “WTF” stands for) and reveals compulsions, desires, details of his sex life and his former cocaine addiction, and peccadilloes such as disdain for Whole Foods, from which he said on the show he has shoplifted Stevia.

He also gets his guests to open up with rare frankness. The aging but lucid Jonathan Winters revealed intimate family details and his psychiatric institutionalization. “Mad Men” star Jon Hamm talked about sex and his perceptions of the industry. Comedians Russell Brand and Robin Williams talked about their own struggles with addiction.

“It was just me and Robin. There was no one there, at his house. And it’s not video. Audio is very intimate,” Maron said. “When you’re sitting there talking with somebody for a long time, eventually the pretenses kind of fall away.”

After a dozen episodes in New York, Maron returned to his home in Los Angeles, and started producing WTF in his garage along with a producer who co-owns the show. Maron got guidance from NPR personality Jesse Thorn.

In the garage, he speaks to famous comedians like Steven Wright, Carlos Mencia and Conan O’Brien, who has frequently had Maron on his TV shows. Maron visited Chris Rock in his New York office, Zach Galifinakis on the set of a movie he was shooting in New Mexico, and does live WTFs with a mix of entertainers.

Early episodes were a combination of Maron’s rants and phone interviews with comedian friends such as Patton Oswalt and John Oliver. The show then featured fake guests, comedic bits, Maron’s mom and dad, a former girlfriend, and a visit to Maron’s native New Mexico, where he chatted up an elementary school friend who has cerebral palsy.

Maron believes a lot of WTF’s success comes from the relationship he cultivates with listeners. The show resonates with high school students and 70-year-olds alike, Maron said. Many of them email him about the ways he’s inspired them to deal with their own “struggles of being alive.”

In turn, they want to give back, whether it’s buying a T-shirt from WTFpod.com, using a discount code from one of the ads on the show, or coming to see him live.

Performers like Maria Bamford and Jim Norton brought bumps in audience by telling their fans on Twitter and elsewhere to tune in. Interviews with stars like O’Brien, Williams, Ben Stiller, Dane Cook, and a two-parter with Judd Apatow got press mentions or were promoted atop the iTunes store with “billboards,” graphics that Maron and his producer created and sent to Apple.

“iTunes is thrilled to have anybody who knows how to do these, any professionals. They like being involved with people who do a good product,” Maron said.

WTF has sold shows to public radio via the PRX radio exchange. Maron has appeared on NPR’s “Wait Wait Don’t Tell Me,” been praised by Ira Glass, and profiled in publications such as Rolling Stone, Vanity Fair and The New York Times.

And, he is very involved in the show’s workings. He still books his own guests, tries to answer every email, and handles the “merch” sold on his site, such as T-shirts and mugs. His producer handles the editing and other technical and business details.

They’ve got partnership deals with outfits such as Libsyn, a podcast maker that has built WTF’s Apple app and a revamped Android one being released any day. A company called Tunecorps helps syndicate the show to various outlets.

They’ll soon be releasing a DVD of the first 100 episodes on mp3, Maron said.

Marc Maron often talks about his cats on his podcast. Photo by Dmitri von Klein with permission from WTFPod.com.

Sponsors, which include Audible.com, Stamps.com, the adult toy site AdamandEve.com, and shows on Comedy Central and HBO, pay $1,300 to $15,000 per episode, Maron said, to get his sardonic spiel about them on the show.

He only takes ads from sponsors he believes in, he said. “I didn’t want anyone to tell me what I could and couldn’t do.”

His first sponsor was JustCoffee.coop, for which he created the tag line, “Pow! I just crapped my pants,” and which gives him 10 percent of every sale made when someone puts in the WTF code on their website. The company created a blend in his honor.

Maron said that sponsorship “was the first time” he realized the power he could wield.

“Once I started plugging Just Coffee and moving people toward it with a promotion code, the owners were like, ‘Oh, my God, you just changed our business,’” Maron said.

Things haven’t gone according to plan, though — mainly because there wasn’t one.

“I’m not a planner, a businessman. I am very easily overwhelmed. I didn’t know this was going to happen, what was going to be involved.” Above all, Maron said, the key to his success as an accidental entrepreneur is that, “I didn’t quit. I did the best I could.”

He joked to Jesse Thorn on one episode that he could teach a seminar on all this: “How to Make Panic Into Money.”

With two decades in comedy, Maron, now 48, had some rare advantages in launching his show. But there are lessons for anyone trying to make a go of podcasting:

All photos courtesy of WTFPod.com