Wearing Our Computers on Our Sleeves 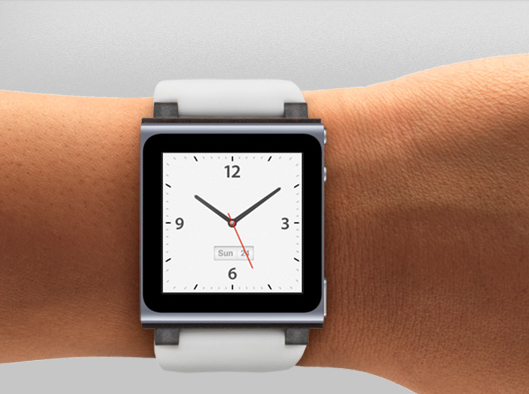 The Apple website is encouraging its iPod Nano to be used as a watch.

It’s natural to imagine our computers as devices that have screens and some sort of keyboard input, real or virtual.

Those two design elements constrain the device’s form factor because the screens need to be big enough for us to see and the keyboards must make room for our fingers or thumbs. But a number of technological hurdles are being overcome that will, in the coming year, dramatically alter the shape of our computing and communication devices. We are about to enter the world of wearable computing.

Before the end of 2012 many of us will be sporting bracelets, watches, fobs and other fashion doodads that will send us messages or convey data to our phones, computers and the Internet.

Before the end of 2012 many of us will be sporting bracelets, watches, fobs and other fashion doodads that will send us messages or convey data to our phones, computers and the Internet."

The rise of the wearable device

Apple’s year-old iPod Nano is being worn as a watch. There are at least a half-dozen companies making watch straps specifically for it. The Nano is a touch-screen iPod, a radio, a Nike running monitor, a photo frame and, of course, a watch — with 18 different fashion faces. Apple’s already considering the next step.

The Up Band, a thin, colorful bracelet from Jambox, captures biometrics about your exercise and sleep patterns and, when you plug it into your computer, sends that data to the Internet so you can see and share your health data. The Fitbit, a pedometer updated for online, does the same sort of tracking, but attaches to your belt, not your wrist.

ADVERTISEMENT
The Up Band monitors your health data.

But these are just the early vanguard of wearable computers that will be much more powerful and versatile. That shift will be fueled by four major trends: improved short-range communication protocols, flexible screens, and better battery life and voice recognition.

Protocols first. A new Bluetooth standard, Bluetooth 4.0, is now being built into smartphones and upcoming wearables. Standard Bluetooth 2.0 is a wireless communications protocol that allows smartphones to “talk” to earpieces.

But Bluetooth 4.0 uses less power and allows devices to “pair” with each other almost instantly. That means that a smartphone in your pocket can share information with a watch or bracelet on your wrist. That information could be the text of an incoming SMS, email or alert. Or, it could just be a signal that makes the bracelet flash blue if you have a new message, green if you’ve received a new email, or red if you’ve gotten an important alert.

Or, you could sport earrings that subtly buzz on your earlobes to signal arriving missives.

Of course, it could also have more serious uses, conveying health-monitoring data from patients to their smartphones and on to their doctors via the web, for example.

The devices could also support Near Field Communication (NFC) protocol so that your watch or bracelet could act as a transit token or a movie ticket by touching it to a point-of-purchase pad, much the way the Presto card in Canada works now.

A smart bracelet is possible due to advances made in flexible screens — often OLEDs (organic light-emitting diodes) — printed on a plastic backing. Such screens can arc along a circular bracelet. These screens display text, images and have a refresh rate high enough to show video. Cheaper e-ink screens (like those in Kindles and Kobo eReaders) have already been made of flexible backing and are being used to display color and monochrome data and images. It’s easy to imagine an inexpensive bracelet that can, chameleon-like, alter its appearance based on sensors that detect a change in ambient temperature, surrounding colors or the vital signs of its wearer. Samsung is already working on flexible screens that will show up in wearable devices this year.

Of course, none of these wearables would work without power. Some, like watches or bracelets, could be powered by solar cells built as a layer of the display screen. Or, since the charging capacity of lithium-ion cells is improving dramatically and the Bluetooth 4.0 standard sips power, they could be powered by small, thin rechargeable cells.

Finally, these upcoming wearable computers can have intelligent ears. Siri, the speech-recognition technology now in iPhones, could power speech-recognizing earrings or watches. The wearable device, of course, would not do the speech-recognition work itself. It would just pass the captured speech to your smartphone via Bluetooth 4, then the phone would compress that audio data, send it to the Internet for Siri servers to decode, and then translate the text and send it as an SMS or email, sending a confirming alert back to your watch.

Why does this matter to us? Because these gadgets will become the next wave of communication devices, as different from tablets as tablets are from desktop computers. As journalists, we need to understand what’s coming and ask important questions like — how do you tell a story to a wristwatch?

Wayne MacPhail is a veteran journalist who now heads up w8nc inc., helping non-profit organizations, colleges and universities, charitable organizations and associations develop and implement technology-based, marketing driven communications strategies. MacPhail also teaches online journalism at the University of Western Ontario and Ryerson University. He serves on the board of rabble.ca where he founded the rabble podcast network and rabbletv. He’s a tech columnist for the website.

This article was originally published on J-Source. J-Source and MediaShift have a content-sharing arrangement.