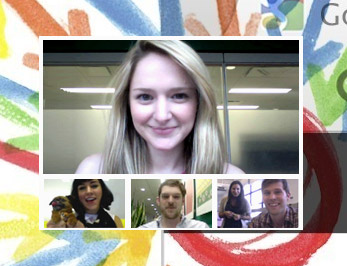 Google Hangout is emerging as a useful teaching tool.

As the year comes to a close, it’s worth a look at the some of the most intriguing developments in journalism education in the last year – from approaches to using social media and curation to new initiatives on data journalism, from academe’s role in the news industry to leveraging publishing platforms.

In the void created by the shrinkage of commercial news outlets, journalism schools are now playing a bigger role in meeting community information needs.
ADVERTISEMENT
Click here to read the whole series

Getting Social, But Not Too Social

1. Hanging Out is In: Journalism educators are constantly exploring new techniques that can bring some pizzazz to the classroom and better engage students. And one new tool that created lots of excitement this fall was the video Hangout feature of search giant Google’s new social network Google Plus. Hangout lets users easily organize live video chats with up to 10 participants, group chat, screen share, co-view YouTube videos, access via mobile, etc.

Although the tool doesn’t appear to have yet found its full potential with J-schools, the possibilities seem broad — not only to improve interaction with students, but between them, as well as among faculty or even between schools. Some journalism educators this fall, for instance, used Hangout to bring expert speakers or even whole panel discussions into their classrooms, or to generate group chats with adjuncts or for news meetings. Among the possibilities: facilitating group projects outside of class, holding virtual office hours and hosting student Q&A sessions (here’s more on Hangout, and more on the education potential of Google Plus). To grasp the full potential for the tool, some suggest letting students take the lead — by showing them how Google Plus Hangouts works, then allowing them to find creative news uses on their own. Educators interested in Hangout might want to check in with USC Annenberg’s Robert Hernandez of #WJChat fame, who’s exploring a monthly Hangout about teaching.

2. Friending is Out, Subscribing is In: With the introduction of news-related services like subscriptions, the social networking powerhouse Facebook is finding more uses in J-school classrooms, where it’s a tool for reporting and source development, user engagement and expanded distribution. But a stumbling block for many is the long-standing question – to friend or not to friend? Some folks won’t do it as a matter of principle; others acknowledge the power politics by only accepting, rather than initiating invitations. But it’s increasingly possible to bypass the dilemma. Using subscriptions, for instance, students can follow select faculty updates without the “friend” relationship. And the use of closed Facebook groups allows classes or larger groupings to share info without crossing any personal boundaries.

3. Aggregation. Teaching aggregation may be controversial in J-schools (is it journalism or is it not?), but that hasn’t stopped some from taking full advantage of one of the smarter curation tools – Storify. One fan is Hofstra’s Kelly Fincham, who writes how journalism educators can use Storify not only to teach students to curate social media, and gain credibility and exposure, but also for faculty to organize readings and create virtual handouts for classroom use. Others have used it to curate training events and to teach beat reporting basics, or have taught it (and curation) as part of the core copy editor’s function. Check out this Storify on using Storify for journalism education and another on tips for using Storify in reporting.

4. Players in Community News: It’s long been a tradition for the J-schools to contribute to the general flow of news, but in the void created by the shrinkage of commercial news outlets they’re now playing a far greater role in meeting community information needs. Beyond such ongoing projects and partnerships as those at USC Annenberg, Berkeley, Arizona State, NYU, the multi-university partnership of News21 and others, now add a new year-round news outlet from Columbia. The volume of university news sites has grown so extensively that American University’s J-Lab has created a directory of dozens. Plus, journalism academe is getting into the money end of the business with the exploration of new business models to replace the collapse of the old — for instance, CUNY, where I teach, has created the country’s first master’s in entrepreneurial journalism.

5. The Rise of the Journo-Programmer. An ambitious hybrid of journalist and computer scientist is what some have in mind as part of the future of journalism. As Columbia was launching its dual-degree masters in journalism and computer science (more), Northwestern last winter announced a $4.2 million Knight News Innovation Lab run by the journalism and engineering schools (more). Other schools are focusing on just making student journalists smarter about doing data within their journalism courses, becoming adept at everything from simple programs like spreadsheets and web-based visualization tools to more sophisticated software like Flash. Influential online journalism educator Mindy McAdams proposes all J-schools have a full-fledged data journalism course, something a few schools appear to be doing (Columbia is one; CUNY is another). Meanwhile, the explosion of smartphones and tablets – the latter are starting to show up more in classrooms, though not without debate over best practices – has encouraged some schools to explore app development, whether through simple thought exercises or by actually building apps from the ground up in dedicated courses.

6. Portfolios, Off the Rack: While some instructors make the case to continue teaching basic HTML and Dreamweaver to journalism students, others are increasingly focusing on finding ways for students to quickly set up and customize simple professional portfolio sites. WordPress seems to be the answer for most, urged upon or even required for students. Academics then actively swap the best themes and favorite plug-ins for everything from Twitter feeds to quizzes and maps, while touting their students’ best work (examples here and here).

Of course, this column only just touches on major trends and key players, so feel free to suggest more in the comments below, and this column try to circle back around to report on them in more depth in the coming months.

A. Adam Glenn is associate professor, interactive, at the CUNY Graduate School of Journalism, and a long-time digital journalist and media consultant. Connect with him on Facebook or LinkedIn, and follow his Twitter”:http://twitter.com/AAdamGlenn feed. This monthly column draws liberally from conversations about digital journalism teaching practices on the online educators Facebook group of the Online News Association. The ONA Facebook group is currently a closed group but you can view ongoing conversations (see our group Q&A tracker), or join in via ONA membership.