Tear Down the Wall Between Business and Editorial! 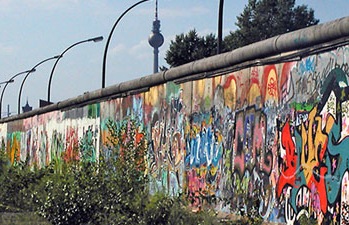 For too long, reporters and editors have been unaware, even hostile to the business sides of their organizations. Those attitudes have helped push the news industry into its current dire state.

And that’s why I say: Tear down the wall between business and editorial.

I'm not proposing a free-for-all money-grab that destroys journalistic imperatives. I am calling for those who make the 'product' to learn how it's sold."

Before you start sharpening your pitchforks, hear me out.

I’m not proposing a free-for-all money-grab that destroys journalistic imperatives. I am calling for those who make the “product” to learn how it’s sold so they can better do their jobs and contribute to the bottom line.

If editorial staff is the first to be pared in news organizations, perhaps that’s in part because they haven’t known enough to make a strong business case for what they contribute.

Jim Brady, the former executive editor of WashingtonPost.com, and now the editor in chief of Journal Register Company, seems to agree that journalists need to learn the business ropes.

“We don’t want to see people sent out into the world slaughtered by the wolves because they don’t know anything about the business side,” he said at this year’s Online News Association conference when I asked his thoughts on journalists learning business principles.

MediaShift managing editor Courtney Lowery Cowgill, co-founder and former editor in chief of the now-defunct New West, was also encouraging. She told me that while she and others were building their sites, they were stymied while trying to get advice on how to support the news businesses while maintaining proper standards.

“Friends in similar startup situations were struggling with how to blur the lines in an intelligent and ethical way,” she said. “There was nobody to help us with that. They were all just saying, ‘No, no. Don’t do it.’ We all need a roadmap for how to do it, a good guide on how to do that ethically, intelligently and efficiently.”

One place to start is attitude.

Can you name another business in which the people who make the key product are allowed, even encouraged, to be ignorant of how they make money?

I’ve found many journalists to be uncomfortable with money. But money is lifeblood. As much as you might labor to get a story in before deadline, you’ll sweat bullets when you’re responsible for payroll and the money isn’t there.

A for-profit business is just that. That profit is what lets you not only continue another day, but also gives you the freedom to determine your own mission.

Yes, the news business is special, and has a special trust. But many businesses are, and some of them — such as health care and food — deal much more literally with issues of life and death. They, too, must juggle ethical and commercial imperatives while doing their work.

Keeping the public trust, even one protected by the Constitution, is not contradictory with the the idea of making your enterprise financially self-sustaining.

The more revenue you have, the more creative ways you can use it to produce a better product, and the more diverse the revenue is, the less beholden you will be to any single source.

The more you know about the business workings, the better arguments you’ll be able to make to gain resources to do good work. You can point out the profits one section you’re handling brings in that can support another effort you believe in.

You may be able to make a case that something that seems like a cost center will, over time, create new efficiencies or revenue-enhancements. You can note that an investigative story may not bring in advertising, but it could bring in page views that you can show lead to new advertising or subscription revenues.

Even better is if you can back up your case in a way a business person can understand, by using data to make a cogent case that applies to the bottom line.

The more literate you are about the finances, not just income, assets and depreciation, but also cost of capital and market conditions, the better you’ll understand the reasoning behind some decisions.

The better grounding you have in the finances, the more respect you’ll have for the business on both the income and expense sides — and the more you’ll want to control costs, or spend appropriately to get the job done.

You’ll be able to see the company through a business lens. You’ll put yourself in a cooperative, collegial position, rather than going begging to the money people with hand out.

If you’re running your own operation, the better you’ll know how close you are to meeting payroll, or how creative you can be to raise some funds.

Do you think newspapers run separate real estate, car or fashion sections for editorial reasons? Or could it be because those sections generate healthy profits?

It’s fine if commercial reasoning influences editorial projects, as long as the projects fit into your overall mission. Let me give an example from MediaShift.

We have sometimes adjusted timing on stories or special series if there was no good reason not to in order to accommodate a client who wanted to sponsor them.

Sometimes we’ve even extended a series by a couple more stories than we might have without the added funds. Producing that extra content can be additive and contribute to the richness of the site.

If we can serve our community and earn revenue at the same time, that’s a home run.

We are mindful of the danger of working so hard to serve sponsors that we neglect the needs of the larger community. That’s very important.

Sometimes, you’ll package material in a way that garners interest from viewers and sponsors. Packaging and repackaging can be a great device.

It’s easy to demean “link bait” such as “Top 10” or “How To” lists, but if your users like and share them, and they generate profitable page views, is there really harm? If there’s sponsor interest, all the better.

You can also launch efforts to make money in order to support other operations that don’t. I’ll later be writing a column about news companies that have done everything from sell web consulting services to hand out sponsor postcards at local gatherings.

A former managing editor at Newsweek (where I used to work) once told me proudly of throwing a salesperson for the magazine out of his office with harsh words.

Perhaps, instead, he could have worked to help craft a solution that met the advertiser’s needs without violating Newsweek’s core principles.

There were times at ABCNews.com, where I was a liaison between the sales and editorial sides after having been a managing editor, when I created products the editorial team accepted while explaining justifiable limits to the sales team.

I have, as a journalist doing business deals, sometimes had to fight the urge to give a sponsor an outright “no” to one of their ideas, and instead tried to glean their ultimate goals and worked together to find an acceptable way to meet them.

Be Willing to Say “No”

You also have to be willing for the long-term health of the business to say “no.” You may be asked to do things you consider unsavory. You have to have the spine to make a sponsor uncomfortable, as MediaTwits podcast co-host Rafat Ali did at his former site, PaidContent, when he reported on a sponsor in a way they didn’t appreciate.

Advertisers rooted in your community (whether that’s a community of professionals, of like-minded individuals, or of geographic proximity) will usually understand if you explain that a request they’re making could damage the operation’s credibility. That damage will also damage their ability to have their message in front of a happily engaged community you’ve worked hard to amass.

You do need core principles that can’t be bent — even if that means the business doesn’t meet payroll. Remember the point above about diversified revenue streams? The more there are, the less any one sponsor can damage you.

Be Prepared for Uncomfortable Conversations

In smaller communities, the people who sponsor a news operation can be the ones being reported on. They’ll ask for favors. You and people you work with have to be able to explain, even in the midst of reporting, what can and can’t be done on their behalf.

At the risk of repeating: The more profit your company makes, the more leeway it has to do its work, to remain independent of government or other interference, and the more freedom to do good work.