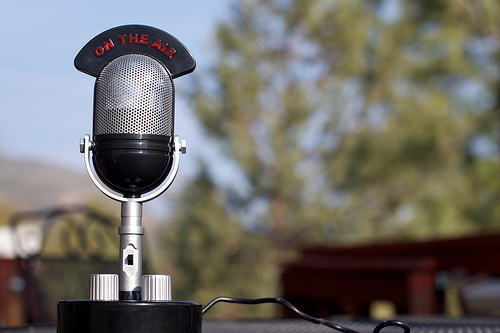 Photo by "Alan Levine on Flickr":http://www.flickr.com/photos/cogdog/ and used here with Creative Commons license.

I posed that question to the public media group on Facebook, as well as to some additional colleagues via email. The responses ranged from a focus on cultivating a culture of innovation, to calls for more innovative content approaches, to the need to grow public media’s audience to provide greater support for our existing innovations. And according to some, what’s needed more than anything — more than any individual innovative approach — is a shared, collective vision of where public media needs to go next.

"While it is a significant driver of change, technology for technology's sake has little meaning. Our imaginations must lead technology." -Sue Schardt, executive director, AIR

Here’s a selection of the responses I received:

“I think what’s still needed most is a change in the culture so that innovation and risk-taking are supported and encouraged.” – Ian Hill, community manager, KQED

Several people agreed with Ian, only some of whom were comfortable being quoted in this piece. Adam Schweigert, who recently departed public media (a temporary hiatus, he insists!) after 7-plus years in the system, said creating a culture of innovation “will do a lot to help recruit and retain new voices, increase diversity, (and) lead to further innovation in content and technology …”

Veteran journalist Max Cacas, currently defense editor at Signal Magazine, but with long ties to public media, argued that a culture of innovation is well and good, but we first need the resources to support such a culture. He offered a specific recommendation:

“I think what is needed is an ‘innovation seed bank’ that public radio/TV/media outlets in smaller markets can tap into so that they can make efforts to serve new audiences without compromising their existing and ongoing services.”

Which raises a great question (one that was still being debated on Facebook, last I checked): Does building a culture of innovation create resources to support said innovation … or do the resources indeed need to come first?

Kelsey Proud, online producer at St. Louis Public Radio, noted, “Some things can be done without money, but others, like equipment purchases, simply cannot.”

Yoonhyung Lee, director of Digital Media Fundraising at KQED, feels that we have plenty of innovation in the system … What’s needed are bigger audiences to help translate innovation into sustainability:

Tech Not Always the Driver

Of course, when you ask a question about innovation, people tend to respond with their own definitions of the admittedly broad term. Some emphasized that while “innovation” often connotes “technology” in this day and age, technology should not necessarily be the driver:

“While it is a significant driver of change, technology for technology’s sake has little meaning. Our imaginations must lead technology. Media makers must first decide what difference they want to make, and for whom — then figure out the tools to get them where they want to go.” – Sue Schardt, executive director, AIR

On Facebook, producer Stacy Bond agreed, voicing her opinion that we should be using technology “to innovate on-air (and in ways that are truly cross-platform, not just safe ways of paying lip-service to cross-platform).” Scott Finn, news director at WUSF in Florida, wants to see expanded digital reporting and original investigative reporting at the state and local level; “then,” he said, “we need to develop the digital infrastructure to share stories across stations and with NPR.”

Public media veteran Michael Marcotte agreed that sharing was key, but wants to see it on an even broader scale. While he agrees resources and culture change are key issues, he thinks the main innovation needed in 2012 is a shared vision, and a plan to go with it:

“We share the mission of public media, but we don’t act in coordinated fashion for the long-term success of the entire system. I think 2012’s innovation should be a national, collective, shared effort to define and refine the vision that drives strategy, policy and investment approaching 2020.”

In a recent piece for Current, Melinda Wittstock — founder of Capitol News Connection, a startup that recently closed its doors — called public media a “cozy, clubby world,” where “risk is a four-letter word.” What do you think? Is public media risk-averse? Do we need to begin taking more risks in 2012? If so, which risks should we take?

What risks will you be taking in the new year?