New Etiquette Needed for Technology In (and Out of) Classrooms 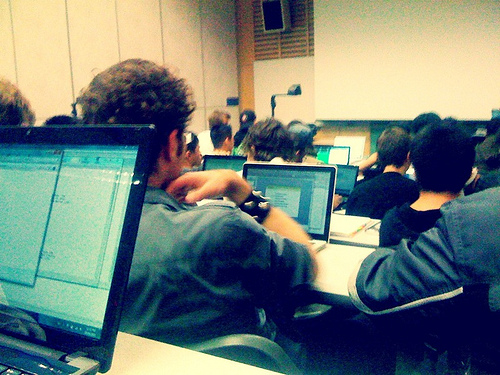 Photo by "Tyler Ingram on Flickr":http://www.flickr.com/photos/tyleringram/ and used here with Creative Commons license.

If you want to see a teacher fume, just bring up the topic of cell phones in class.

We chide students for texting in class but then encourage them to tweet. We force students to put away their phones but then immerse ourselves in our own screens when colleagues speak."

Then again, teachers often have their own problems paying attention.

We chide students for texting in class but then encourage them to tweet. We force students to put away their phones when we lead class discussions but then immerse ourselves in our own screens when colleagues speak. At meetings of all sorts, we have accepted a new posture: heads down, fingers tapping out words, eyes awaiting responses. Faculty members have adopted many of the same habits they condemn in their students.

It seems, then, that everyone, teachers and students alike, need to find new ground rules on how to engage when real and online life collide.

At the recent Journalism Interactive conference, for instance, an array of speakers grappled with the role of technology in the classroom, with the use of tech in the news media, its influence on teaching and learning, and its opportunities and frustrations.

Audience members — mostly professors — sat heads down, eyes trained on smartphones, tablets and laptops. At the front of the room, panel members tweeted, checked messages from the audience, and followed the conference Twitter stream. It was hard to tell whether anyone was paying attention.

None of this was surprising. Promos for the conference encouraged participants to bring their gadgets. And this was, after all, a gathering of journalists, who crave constant information. With my own iPad and keyboard, I took copious notes and occasionally checked the live blog, the electronic schedule and, uh-hum, my email.

I began to wonder whether in our haste to share and record we haven’t lost something. When we live tweet, are we truly paying attention? Has technology focused us so much on the 140-character sound bite that we miss the bigger message or even the dinner table conversation? Are we becoming so hooked on the thrill of speed and immediacy that we are losing our sense of context?

The value of engagement, of all kinds

I have no intention of condemning technology. Tweeting and live blogging during events can create a broader conversation, and can allow audience members to participate more easily and to ask questions and make observations that might otherwise fade away. They can be excellent tools for teaching and learning. They also create a potentially valuable archive.

And yet, the rules of etiquette have grown murky, in the classroom, the auditorium and nearly everywhere else that people gather. A recent conversation with a colleague about how students engaged with a guest speaker in a class drove that point home for me. The colleague had asked students to live tweet the event, something that made one student seem especially uncomfortable. As classmates and even the speaker tweeted, that lone student sat and watched, looking disturbed, even pained.

To a degree, I understood. The student was being asked to do the very thing most professors had warned about not doing in other classes. As professors, we expect our students to pay attention to classroom conversations rather than monitor their phones or pass personal notes via text message. Some professors have asked students to check in their cell phones before class. Some don’t even allow laptop computers because students have trouble resisting the siren song of Facebook.

Students themselves have expressed concern about the boundaries and ramifications of technology. At my own university, the Student Senate recently polled faculty members about classroom technology use and asked about the usefulness of policy recommendations that professors could add to syllabuses. The announcement for the poll said students were confused by a wide variety of policies and practices across campus.

We want our students to be engaged because engagement fosters learning. And yet the rules of engagement are changing — in education, in business, in life. We once knew and accepted the unwritten standards of etiquette: When a speaker spoke, we paid attention. We may have taken notes, but we listened respectfully, eyes forward. Being present and attentive was simple courtesy.

Now, though, we’re redrawing boundaries without discussing why the original ones existed in the first place — or understanding what impact the new boundaries may have. Our tolerance and our culture are changing one tweet at a time.

It’s something we need to pay attention to.

Photo of Facebook in the classroom by Anna Briggs on Flickr and used here with Creative Commons license.

Doug Ward is an associate professor of journalism and the Budig Professor of Writing at the University of Kansas. He is the author of “A New Brand of Business: Charles Coolidge Parlin, Curtis Publishing Company, and the Origins of Market Research” and a former editor at The New York Times. You can find him online at www.kuediting.com and www.journalismtech.com, and follow him on Twitter @kuediting.

Recent MediaShift stories on the topic of technology in the classroom: