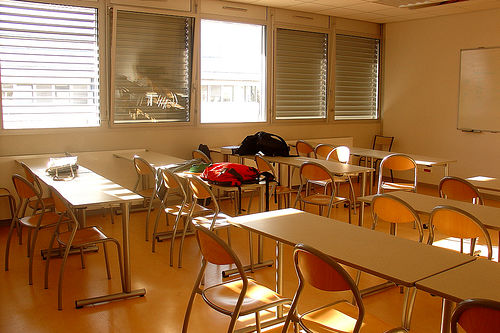 Photo by "Thomas Favre-Bulle on Flickr":http://www.flickr.com/photos/lnx/ and used here under Creative Commons license.

New technology is a lightning rod and polarizing force because, as Nicholas Carr articulated in his book, “The Shallows: What the Internet is Doing to Our Brains,” it not only begins to influence what we see and how we see it, but, over time, who we are.

It makes sense then, that debate of digital technology’s role in society is naturally being played out in microcosmic form within schools. Education is designed to transmit a culture’s history, values and theories of knowledge while also preparing students for the world of tomorrow. Yet, in times like ours, when the gulf between the past and future stretches light years, cognitive dissonance ensues when students, teachers and parents try to figure out what technology should be used to bridge this timeline.

If schools don't train students to use and think about digital tools in a thoughtful way, where else is it going to happen?"

While critique of new technology within schools is healthy and to be expected, a recent New York Times article revealed an unexpected source: Silicon Valley. The essence of the article, “A Silicon Valley School That Doesn’t Compute,” can be found in the third paragraph:

“Schools nationwide have rushed to supply their classrooms with computers, and many policy makers say it is foolish to do otherwise. But the contrarian point of view can be found at the epicenter of the tech economy, where some parents and educators have a message: computers and schools don’t mix.”

The conflict between computers and schools is really a conflict between educational paradigms. The traditional and dominant paradigm is rooted in the book and the pedagogy is one of transmission. Teachers, who have presumably read more books than their students and listened to more scholarly lectures, transmit what they’ve learned to their students in a similar fashion.

The students who do best within this system are those who can capture the transmission — as unfiltered as possible — and mirror back to the teacher what they have delineated. Within this model, digital technology can provide improvements, but they are cosmetic.

Teachers can enhance their lectures with presentation software, videos and other forms of multimedia, but the methods stay the same. For teachers who don’t understand how these new tools can enhance what they are teaching, then technology can be a distraction.

The pedagogy that’s emerging to deliver 21st-century skills is student-centered and inquiry-based. In the inquiry-based approach, student interest drives the learning process and the teacher shifts from the sage on the stage into more of a coaching role. Within this system of learning, there is real value in having the widest range of technological tools for not only consuming information in all its multimodal forms, but for creatively demonstrating what one has learned.

Within an inquiry model, in addition to keeping an eye on content, teachers should be focused on what kinds of skills they want their students to cultivate — such as critical thinking, communication and collaboration — and then from this baseline determine what kinds of tools are best for developing those skills. Some will be digital, some won’t. But to eliminate digital tools from the classroom toolkit completely is a sign of the confusion and fear people are feeling as the gravitational pull of digital technology bends our culture.

Technology shapes habits of mind. Different tools allow for varying kinds of experiences. Modern neuroscience has revealed that different experiences lead to other kinds of brain structures. As a result, perception and thinking are altered by the technology we use.

For those of us who have been wired to learn in specific ways and with certain tools, when new ways and tools come along that undo that wiring, it’s understandable why many might think that the gold standard of learning is being attacked. Socrates felt the same way about the technology of literacy. But this is why it’s so critical to integrate digital tools into a learning environment.

If schools don’t train students to use and think about digital tools in a thoughtful way, where else is it going to happen? A recent article by Clive Thompson in Wired on “Why Students Can’t Search“ underscores this point. The crux of the article states that “students aren’t assessing information sources on their own merit — they’re putting too much trust in the machine.” Just because students are at ease inputting words or phrases into a search engine doesn’t mean they know how to engage in critical research and judge sources. This kind of critical thinking takes training.

To say digital literacy is something that students can learn once they are older is akin to an oral culture saying reading can be taught only once students have mastered the oral tradition. As a society, we need to learn to not only know how to use digital tools but, perhaps more importantly, learn how they can augment our thinking and discover what new kinds of cognitive and social capacities they yield.

This is a process of discovery — and like all discovery, it’s filled with trial and error. Our current educational system stigmatizes mistakes. To understand how digital technology can enhance teaching and learning in the 21st century we’ll need to embrace James Joyce’s philosophy: “A man of genius makes no mistakes; his errors are volitional and are portals of discovery.”

2 responses to “Teaching Without Technology?”